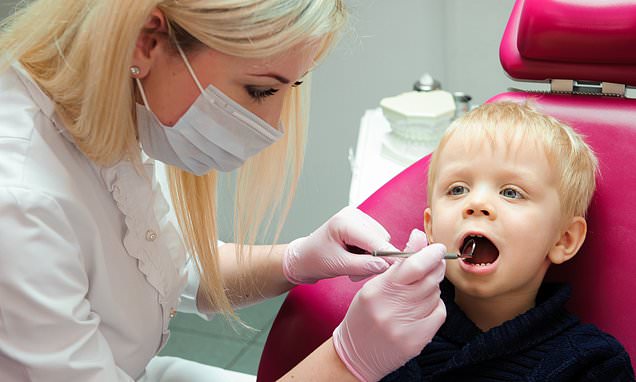 More than half of children under the age of four didn’t see an NHS dentist last year, figures show.

Parents are advised to make sure young children are seen as soon as their first teeth appear.

Following that, health regulators say parents should schedule another check-up by the age of one, and then follow-ups at least every 12 months.

If not, the risks associated could not only be damning for a child’s baby teeth, but have long-term consequences later in life, experts said. 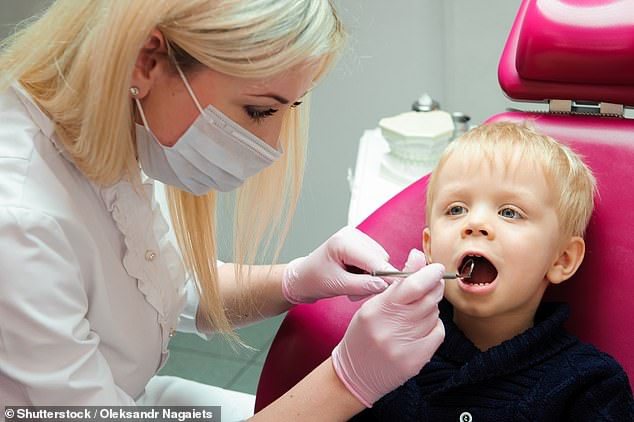 NHS Digital data, analysed by the Faculty of Dental Surgery (FDS) at the Royal College of Surgeons, found that 57.7 per cent of under four-year-olds did not see the dentist in 2018.

Overall, 41.4 per cent of children, up to the age of 17, did not attend an NHS dentist appointment last year.

The findings echo previous research that too many children are at risk of needing dental work at a young age because their parents haven’t taken them to the dentist soon enough.

Professor Michael Escudier, dean of the Faculty of Dental Surgery at the Royal College of Surgeons said: ‘It’s disappointing that nearly six in 10 one to four-year-olds did not see an NHS dentist last year.

‘Children who experience early childhood tooth decay are much more likely to develop subsequent problems, including an increased risk of further decay in both their baby and permanent teeth.

RISING NUMBER OF BRITISH CHILDREN IN HOSPITAL WITH ROTTEN TEETH

Growing numbers of children with tooth decay are being admitted to hospital, damning figures show.

More than 26,000 children aged five to nine were taken to hospital in the past year because of rotten teeth, NHS figures in September revealed.

The number has risen for the second year in a row and is more than double the amount of children who needed treatment for tonsillitis.

Experts say the figures are ‘disgraceful’ and have blamed the UK’s sugar obsession for ruining children’s teeth as well as fuelling rising levels of childhood obesity.

This compares to just 12,143 admissions for acute tonsillitis.

And the number of hospital admissions for tooth decay among babies to 19-year-olds has decreased overall from 45,224 to 44,047 in the same period.

The figures even included two children under the age of one.

‘This is partly because extensive damage to the baby teeth can cause abscesses that harm the permanent teeth developing inside the gums.

‘It’s so important that a child’s first interactions with the dentist are for simple check-ups rather than more serious treatment.

‘Just getting a child into the habit of opening their mouth for a dentist to look at their teeth is useful practice for the future.’

Introducing a child to going to the dentist regularly as normal behaviour is important as well as the health side of the appointment, experts said.

‘If children only visit the dentist for the first time once they have a problem, the experience can cause fear and lead to poor dental attendance throughout their lives,’ Professor Escudier added.

‘Therefore, FDS strongly advises that children have their first check-up before they turn one.

‘We are calling for supervised tooth brushing sessions to be introduced in nurseries and primary schools across England, as similar initiatives have already been successful in improving children’s oral health in Scotland and Wales.’

England’s Starting Well programme is a ‘poor relation’ in comparison to schemes in Scotland and Wales, Mick Armstrong, chair of the British Dental Association, has said.

He said: ‘We are particularly concerned about the persistent and unacceptable inequalities, whereby children from deprived backgrounds are more likely to suffer from tooth decay than their peers.

‘Deep inequalities are persisting, and we need everyone to play their part.

‘We shouldn’t accept that a child born in Pendle will enter primary school with twenty times the levels of decay as one born in Surrey.’

The BDA have concern that parents are unaware NHS dentistry is free for children up to the age of 18, and some may be worrying about the cost.

Mr Armstrong said: ‘The BDA is concerned that more children are not accessing their free NHS check-ups.

‘As it stands almost five million children in England have not been to an NHS dentist in the past year.’

In 2016/17, dentists removed rotting teeth in nearly 43,000 operations, the BDA said, but nearly all of these could have been avoided.

Furthermore, the number of children being admitted to hospital with tooth decay has risen in the past couple of years, according to figures from September.

Experts have blamed the UK’s sugar obsession for ruining children’s teeth as well as fuelling rising levels of childhood obesity.