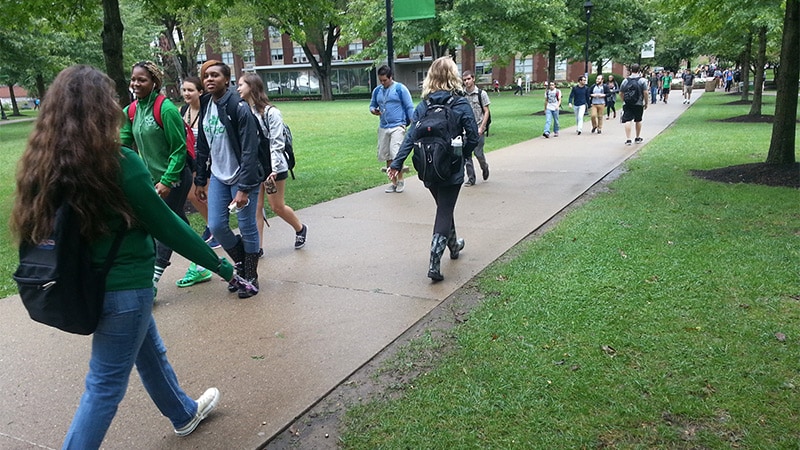 College campuses, set to reopen across the country this month, are confronting a new public health crisis: Monkeypox.

At least five universities have already confirmed cases of the virus among students over the summer: Georgetown University and George Washington University, both in in Washington, DC; the University of Texas at Austin; and Bucknell and West Chester universities in Pennsylvania.

Even before classes resume for the fall semester, fears are growing that those cases signal what will likely be a rise in monkeypox infections as students, staff, and faculty return to campuses.

“Colleges and universities need to be proactive,” and “what they need to have in place is a plan so they’re not doing it on the fly,” says Amesh Adalja, MD, an infectious disease specialist and senior scholar with the Johns Hopkins Center for Health Security.

Schools need to make sure their campus medical staff is educated about monkeypox, he says, and make sure students know where the risks are.

“They need to have some connection with getting students tested on campus,” he says. “And they should also coordinate with their local state health departments as more vaccine becomes available for those at-risk populations.”

In response to the threat, school officials are rushing to raise awareness of the virus, which is mostly spread through skin-to-skin contact. Some are also adding monkeypox discussions to student orientation programs, stocking health facilities with tests, and developing isolation plans, in case of any outbreaks.

For now, universities and colleges are not planning mass vaccination campaigns for students or staff, in part because the shot is in limited supply and only for those most at risk for the virus, such as men who have sex with men.

“Vaccines are in extremely limited supply. While that’s the case, mass vaccination of a low-risk group (all students) is not an option,” says Leana Wen, MD, an emergency doctor and public health policy professor at George Washington University.

“We’re preparing comprehensive educational information, including FAQs to be included on our website [and through] our student health service,” she says. “We also have an emphasis that we’re placing on launching a series of in-person educational programs that are designed to educate all student populations.”

In addition, the university is working with county health officials, the CDC, and on-campus groups to encourage “frank conversations about sex, relationships and health” among the school’s 17,600 students.

Santos Gainer says that if monkeypox cases kick up in the coming months, the university already has plans to vaccinate students.

“When the vaccine becomes available for the university to access, there has been talk with the Chester County Health Department about the university’s willingness to provide the vaccine on a voluntary basis,” she says.

These initiatives are line with current CDC guidelines on tracking and containing the spread of monkeypox in “congregate living settings,” although those recommendations are not specifically for universities and colleges.

Those guidelines note the virus can cause flu-like symptoms (fever, chills, swollen lymph nodes) and a rash that can include pimples that often scab over before healing. It spreads through direct contact with skin lesions, infected body fluids, or exposure to respiratory droplets through face-to-face contact. Touching objects used by someone infected with the virus (such as bedding, clothes, or towels) can also pass it on.

No treatments are specifically designed for monkeypox, which typically goes away on its own in 2 to 4 weeks. But antiviral drugs, such as tecovirimat (TPOXX), can be used in severe cases.

If a monkeypox case has been identified in a group living facility, the CDC recommends officials report the case publicly, mount awareness campaigns to highlight symptoms and prevention strategies, offer testing, and isolate anyone with the virus until they are fully recovered.

With more than 11,000 monkeypox cases reported in the US — most among men who have sex with men — some health experts say more should be done to specifically target the virus’s spread on college and university campuses.

Lawrence Gostin, a professor of global health law at Georgetown, predicts outbreaks will strike universities this fall and has called for more efforts by college officials and the CDC, comparable to those mounted to combat COVID-19.

Adalja agrees that certain populations are at greater risk for monkeypox and that should factor into planning and response efforts.

“We know that among men who have sex with men, there is a clear and present danger with monkeypox…so there should be outreach directed to those individuals,” he says. “And with wrestlers, we’ve seen herpes outbreaks during wrestling — Herpes gladiatorum, it’s called. So I think there may be some special need for those types of sports where there is aggressive skin-to-skin contact.”

William Schaffner, MD, a professor of infectious diseases at Vanderbilt University School of Medicine, says monkeypox presents some difficult challenges for prevention. Symptoms can be mild or even go unnoticed in some people. The virus also spreads through intimate contact but is not a sexually transmitted infection that can be countered through conventional safe sex practices, such as wearing a condom.

“You can have monkeypox without swollen lymph glands, you don’t have to have much fever,” he notes. “And you can have monkeypox with only a few a few rash lesions, and they don’t have to be where they’re very visible — on your hands, your arms, your face. They could be on your trunk, around your genitalia, or on your backside, so they could be hidden. If you have a mild infection, you might even be unaware of these lesions.”

Schaffner, medical director of the National Foundation for Infectious Diseases, worries that monkeypox could spread widely on college campuses this fall, without broad public awareness campaigns that alert all students to the dangers — not just those at-risk people who’ve mostly been infected to date.

While men who have sex with men make up the majority of cases, the virus is not confined to that community, Schaffner says. The longer it is around, the more likely it is to affect other populations.

One thing that may help colleges and universities confront monkeypox this fall: COVID-19 forced school officials to create aggressive public health campaigns that can now be used to confront the new viral threat this fall.

“Because they’ve been doing so much for COVID the past couple of years, a lot of those systems are already in place and perhaps can be reconfigured to handle monkeypox,” Adalja notes. “As many universities are lowering their hazard stance or preparedness level for COVID, as it becomes more increasingly manageable, some of those resources can be redeployed toward monkeypox.”

Schaffner agrees, but he says he believes monkeypox presents more challenges because of how it is transmitted and questions of stigmatization.

“Clearly, universities have geared up thinking about communicable disease control, and here at Vanderbilt, we have been extraordinarily successful, and many other universities have also,” he says. “However, this is a disease spread through sexual intimacy. So confidentiality becomes absolutely key.

“We will have to convince people that information about their status will not leak out to their fellow students.”

Santos Gainer, the West Chester University spokeswoman, says there is no question that the school’s COVID programs created a foundation that has already allowed school officials to hit the ground running on the monkeypox threat.

“COVID actually put a large framework [in place] for a lot of the work that we are currently doing with monkeypox,” she says. “Our student health service also has numerous monkeypox test kits on hand, and we’re prepared to answer students’ questions as well as provide testing to students, if needed.

“So, West Chester University is prepared.”

Other universities across the country have also notified students and staff about monkeypox, and put new protocols and programs in place to push public education, prevention, and testing for those who need it.

University of Texas administrators alerted staff and faculty to the lone monkeypox case on campus and created a university hotline for students who’ve been exposed or have symptoms.

“The risk to the broader campus community remains low, and the monkeypox virus does not spread easily without close contact,” says Shilpa Bakre, a spokesperson for the university. “Like other illnesses with similar modes of transmission, we provide public health education to the community, appropriate training to healthcare providers, and collaborate with key stakeholders on any environmental strategies needed to reduce the incidence or spread within our population.”

Similar efforts have been started at other schools, where administrators have turned to social media, emails, public statements, digital online resources, and other communication networks to get the word out and help prepare for monkeypox:

George Washington University emailed a statement to students and staff on the case there, saying the school was working with local health officials and its own medical and occupational health teams. “The university is working with the DC Department of Health, the GW Medical Faculty Associates’ Infectious Diseases team, GW Occupational Health,” and the student medical center to “support the university community in response to this infection.”

Georgetown reported that its Student Health Center and university hospital are working to identify, test, and manage cases among students and staff. “We will continue to monitor public health conditions on our campuses and provide updates as needed,” Ranit Mishori, MD, a professor of family medicine and chief public health officer for the college, said in a statement.

Bucknell created a website to give students and staff details on the university’s monkeypox response, prevention, and management plans, as well as contact information about on-campus testing for students.

Johns Hopkins University released an advisory, noting administrators are “closely monitoring the situation and having conversations with the Maryland Department of Health regarding monitoring of cases, testing, contact tracing, and procedures for treatment of infected individuals.” School officials have also assembled a group of public health and medical professionals to guide their response.

The University of North Florida created a website that offers guidance for incoming students and is redirecting Student Health Services COVID-19 protocols toward monkeypox prevention, testing, and awareness.

Northwestern University has assembled a team of infectious disease specialists and state health officials to guide its response to the virus — including awareness campaigns, diagnosis plans, contact tracing of cases, and isolation protocols (allowing for 2- to 4-week recovery times) — according to a statement released this week.

At Cornell University, the campus health unit has published an online clearinghouse of information on monkeypox, including details on prevention, symptoms, testing, and isolation protocols for students.

University of California officials are finalizing campus-by-campus initiatives at UCLA, UC-Davis, UC-Irvine, and other schools in the system, says UC spokeswoman Heather Harper.