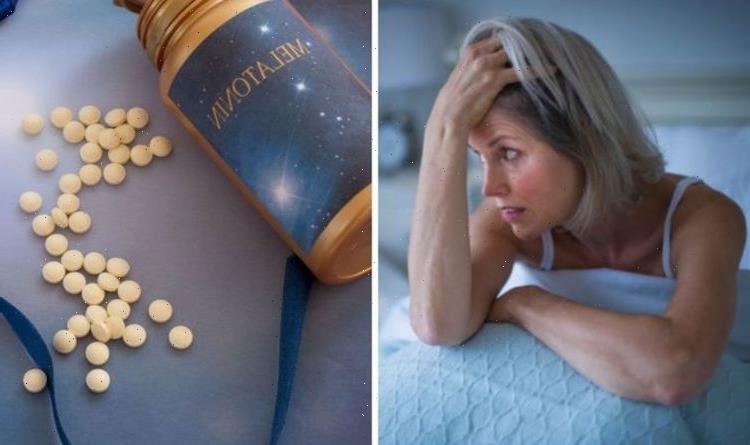 Difficulty sleeping is a symptom of menopause, a phase women can’t avoid going through usually between the ages of 45 and 55. If you find it hard to get to sleep or wake up several times during the night, this can cause issues in your day to day life and your body and mind won’t be able to function and their best. Express.co.uk chatted to Dr Deborah Lee from Dr Fox Online Pharmacy to find out why melatonin could help you sleep better if you’re suffering from insomnia from menopause.

During menopause, women can experience insomnia or difficulty sleeping.

Dr Lee said: “You might find it difficult to get off to sleep (sleep latency) or wake up frequently at night and not be able to get back to sleep.”

Perimenopausal women (the first stage of menopause that can start eight to 10 years before menopause) take HRT to help them cope with menopausal symptoms including sleep difficulties and night sweats, but this may not be enough for menopausal and postmenopausal women.

Dr Lee explained: “Menopausal and postmenopausal women who continue to suffer from sleep disturbance may wish to consider taking a supplement of the sleep hormone melatonin.”

Melatonin is a hormone produced in the brain by an organ called the pineal gland.

The hormone is also produced elsewhere in the body, but only in relatively small amounts.

The pineal gland produces melatonin at night when it’s dark.

Light – this could be daylight or blue light emitted from light bulbs, TVs, mobile phones and computer screens – switches off melatonin production.

As darkness falls at night, melatonin levels rise during the evening, and high levels of melatonin signal the brain that it is time to sleep.

Dr Lee warned: “If you expose yourself to too much light late at night, this disrupts normal melatonin secretion and confuses your natural body clock, resulting in insomnia, and upsetting your normal sleep patterns.

“Disturbing your natural circadian rhythms is harmful to health as sleep is vital for metabolism, restorative processes, and clearance of toxins.

“To stay healthy, we need to work with and support our circadian rhythms, and this means making sure there is a dependable rise in melatonin levels every night before bedtime.”

Melatonin levels decline with age and HRT is also thought to reduce melatonin secretion, so menopausal women have a tricky time trying to figure out how to get as much sleep as possible.

In a 2014 randomised, double-blind, placebo-controlled study, 200 postmenopausal women were randomly assigned to take either 3mg melatonin every night for three months, or a placebo.

Over the period of the study, a wide range of menopausal symptoms decreased, but the greatest improvement was seen in the melatonin group, and this was statistically significant.

Dr Lee said: “The authors suggested that improved mood, anxiety, and depressive symptoms might be due to the effect of melatonin to improve sleep.”

On top of that, in a 2021 review of 24 studies on melatonin and women’s health, melatonin was shown to improve sleep quality in menopausal women complaining of difficulty with sleep.

Dr Lee said: “In one open-label study, a group of menopausal women with sleep impairment took 3mg melatonin at night for three months.

While the benefits of melatonin seem to be small and only equate to an extra eight minutes of sleep per night, it’s still something.

Dr Lee said: “If you are severely sleep-deprived, eight minutes are better than nothing.

“Response to treatment varies and some women report marked improvement.

“However, sleep specialists recommend that for best results, melatonin is taken in conjunction with Cognitive Behavioural Therapy (CBT).”

Melatonin is unlikely to produce a good improvement unless other factors such as following a good sleep hygiene regime and having a fixed routine are in place.

If you fancy trying melatonin, Dr Lee recommends taking 2mg to 6mg at night an hour or two before bedtime.

Start with a low dose and increase the dose after a few nights if you have had no response, as some people get a better response at lower doses.

Dr Lee added: “Your doctor may prescribe a slow-release preparation, such as Circadin, which releases melatonin slowly into your body during the night over a period of hours.

“Melatonin patches may be an alternative option, although sleep experts are sceptical about their effectiveness.”

Certain foods contain melatonin, so you could also try eating these for your evening meal.

Melatonin should not be taken by women who are pregnant or breastfeeding, by anyone with a bleeding disorder, high blood pressure, depression, epilepsy, or who is currently immune suppressed.

Melatonin should also not be taken by anyone taking the following medications:

Always check with your GP if you take any regular medication before starting melatonin.

Melatonin has only been studied in terms of long term use, for two years. However, so far, this appears to be safe.

The most common side effects are headache, dizziness, daytime sleepiness, and depression. You should not drive or operate heavy machinery within four to five hours of taking melatonin.

Melatonin has only mild hypnotic effects and is not addictive.