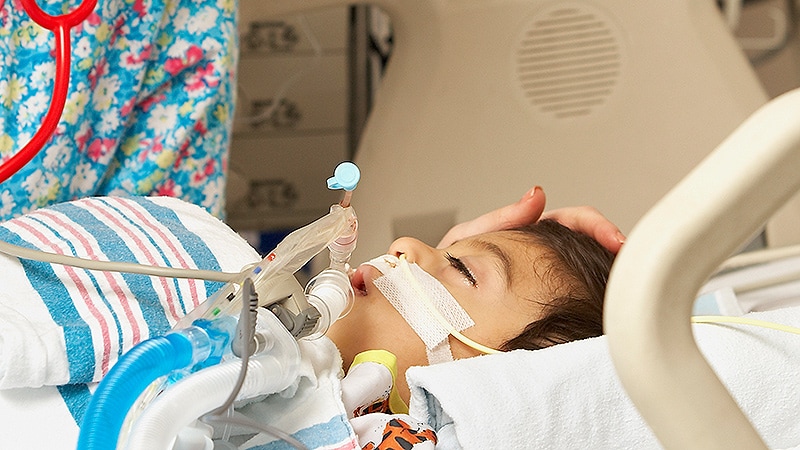 Although this magnitude of difference was small on average, more than twice as many patients than siblings had an IQ of ≤85, and children hospitalized at the youngest ages did worse than their siblings.

The study was published online March 1 in JAMA.

“With improvements in pediatric critical care over the past several decades, critical illness–associated mortality has improved dramatically, [but] as survivorship has increased, we are starting to learn that many patients and their families suffer from long-term morbidity associated with the illness and its treatment,” said Watson, who is the associate division chief, Pediatric Critical Care Medicine, Seattle Children’s Hospital, Center for Child Health, Behavior, and Development.

Animal studies “have found that some sedative medications commonly used to keep children safe during mechanical ventilation may have detrimental neurologic effects, particularly in the developing brain,” Watson added.

To gain a better understanding of this potential association, the researchers turned to a subset of participants in the previously conducted Randomized Evaluation of Sedation Titration for Respiratory Failure (RESTORE) trial of pediatric patients receiving mechanical ventilation for acute respiratory failure.

For the current study (RESTORE-Cognition), multiple domains of neurocognitive function were assessed 3 to 8 years after hospital discharge in trial patients who did not have a history of neurocognitive dysfunction, as well as matched, healthy siblings.

To be included in the study, the children had to be ≤8 years old at trial enrollment, have a Pediatric Cerebral Performance Category (PCPC) score of 1 (normal) prior to PICU admission, and have no worse than moderate neurocognitive dysfunction at PICU discharge.

Siblings of enrolled patients were required to be between 4 and 16 years old at the time of neurocognitive testing, have a PCPC score of 1, have the same biological parents as the patient, and live with the patient.

Differences in scores between patients and siblings varied significantly by age at hospitalization in several tests — for example, Block Design scores in patients were lower than those of siblings for patients hospitalized at <1 year old, vs those hospitalized between ages 4 – 8 years.

The investigators point out several limitations, including the fact that “little is known about sibling outcomes after critical illness, nor about whether parenting of siblings or child development differs based on birth order or on relationship between patient critical illness and the birth of siblings…. If siblings also incur negative effects related to the critical illness, differences between critically ill children and the control siblings would be blunted.”

Rotta, who is also a co-author of an accompanying editorial, noted that the fact that the “vast majority of children with an IQ significantly lower than their siblings were under the age of 4 years suggests that the developing immature brain may be particularly susceptible to the effects of critical illness and therapies required to treat it.”

The study “underscores the need to include assessments of long-term morbidity as part of any future trial evaluating interventions in pediatric critical care,” he added.

The study was supported by grants from the Eunice Kennedy Shriver National Institute of Child Health and Human Development for RESTORE-Cognition and by grants for the RESTORE trial from the National Heart, Lung, and Blood Institute and the National Institute of Nursing Research, National Institutes of Health. Watson and co-authors report no relevant financial relationships. Rotta has received personal fees from Vapotherm Inc for lecturing and development of educational materials and from Breas US for participation in a scientific advisory board, as well as royalties from Elsevier for editorial work outside the submitted work. His co-author reports no relevant financial relationships.