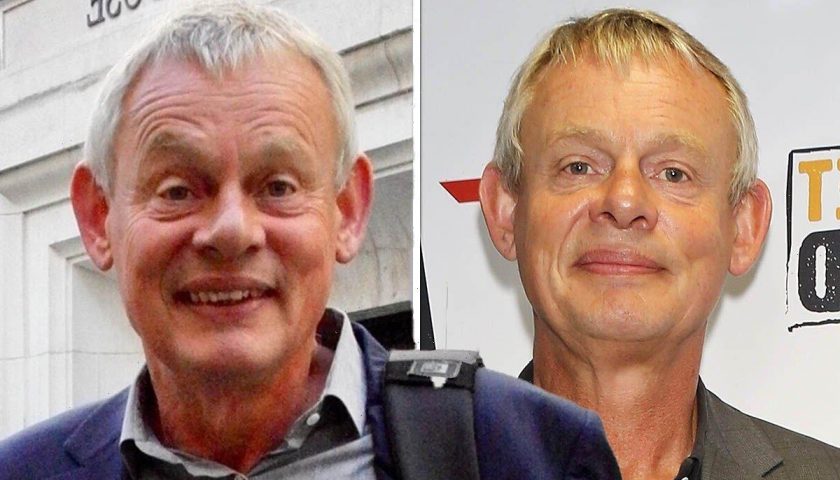 Doc Martin: Martin Clunes says it 'feels like a good time to stop'

During his newest series Clunes visits Norfolk Island, Australia’s most easterly territory. This includes a visit to Mundoo Island, which has impressively provided a way of life for five generations of one farming family. But it was during his time as the grumpy yet lovable Doc Martin that Clunes was suddenly struck down with a mystery virus that caused him to lose weight, with the costume department having to remake his entire wardrobe.

Speaking back in 2013, Clunes said: “I had a virus and lost a stone. They had to remake my clothing to fit.”

Although the star didn’t divulge into the type of virus he suffered from, back in 2012 the actor revealed more about his health and weight, saying that he has switched to a 6:1 diet after losing more than three stone with the 5:2 diet.

The 5:2 diet involves eating “whatever you like” for five days of the week, but dramatically cutting calories for two of the others. Known as “part-time dieting”, this helps individuals realise how they eat.

The simplicity of the diet, and the fact individuals can eat pretty much what they want five days a week, are key to its popularity.

Those who try it are recommended to consume a “normal” number of calories five days a week and then, for two, non-consecutive days, eat just 25 percent of their usual calorie total – which totals 500 calories for women and 600 for men.

For Clunes however, the motivation for taking up the diet was more than just weight loss, as he revealed that it was good for his cholesterol too.

Reflecting on his change in diet back in 2017. He added: “I was fat – and while I was getting heavy, I had tired knees and stuff.

“So I thought I’d try that diet and the weight came off.

“I lost about three stone in as many months. It’s great – and it’s supposed to be good for cholesterol, too.”

With the impact of his health on his mind, Clunes saw drastic success on the 5:2 diet, and soon changed to the 6:1, where individuals cut calories for only one day a week instead of two.

In addition to dieting, Clunes also managed to increase the amount of exercise he was doing, meaning he had remained free of taking any medication. The star added: “I have a couple of big horses and ride them.

“I’m very healthy. This is a difficult age, obviously, but I’m doing fine – I’m not on any medication.”

But is the 5:2 diet good for your health?

British Heart Foundation (BHF) dietician Victoria Taylor commented that the diet, which essentially involves intermittent fasting, has some evidence suggesting that it has been linked to “lower rates of coronary heart disease and diabetes”, although more research is needed to prove if this is accurate or not.

In the long-term, individuals, especially those with diabetes, may not find the 5:2 diet effective. Alternatively, a well-balanced diet and being more active can help individuals to lose weight steadily and gradually over time.

However, for those with a hectic lifestyle, the 5:2 may be easier to stick with in comparison to other diets. But, some side effects, especially on fasting days may occur. These can include:

It is also extremely important to keep hydrated whilst on the 5:2. Water is typically the best choice as it contains no calories and can help keep individuals from feeling dehydrated or tired.

Lloyds Pharmacy explains that individuals tend to lose more weight when they first begin the diet, but this will differ for every individual. Losing too much weight too quickly can be unhealthy, so the target for any sustainable weight loss diet should be gradual weight loss.

As with any diet, individuals should consult their GP beforehand, as the 5:2 is not recommended for those under 18, pregnant or those who have a pre-existing medical condition such as diabetes.

Instead, HEART UK, a leading cholesterol charity explains that there are several foods in particular that can actively help to lower cholesterol. The more they are eaten, the more they will help cholesterol.

Following a cholesterol-lowering diet such as the above can help individuals to avoid life-threatening conditions such as a heart attack, stroke and peripheral arterial disease (PAD). These occur as cholesterol can build up in the artery wall, restricting blood flow to the heart, brain and rest of the body.