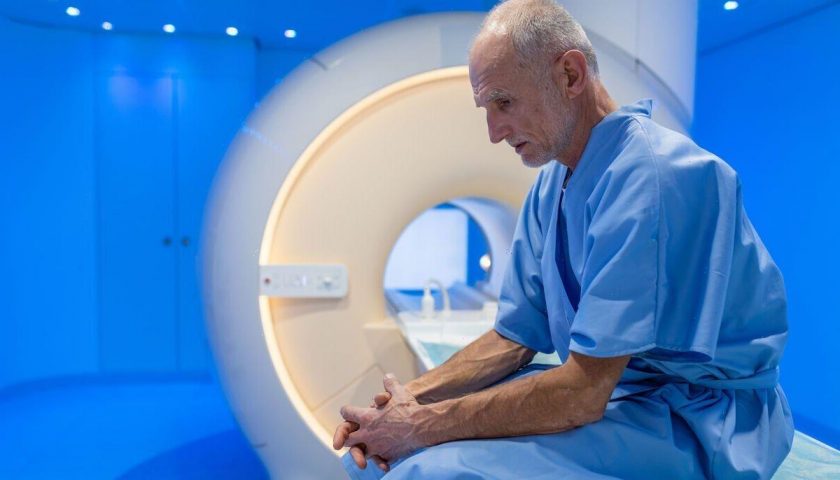 Prostate cancer is the fifth most common cause of cancer deaths among men. One major reason for this poor prognosis is the slow progression of symptoms. Oftentimes, warning signs only emerge once the tumour has grown and started pressing against nearby tissue and organs. Though the disease rarely spreads to the skin, cases of this have been recorded.

In 2018, researchers writing in the journal Hindawi reported on the case of a 56-year-old man who presented to his clinic with a month-long history of skin problems.

The patient has purple nodules located on his upper right cheek, which measured roughly 1.5 cm in diameter.

The purple nodule was solitary and asymptomatic, and had a “firm consistency, an ulceration in its centre, and slightly raised edges surrounded by hematic crusts”.

The patient initially reported no other unusual symptoms but alleged a weight loss of approximately eight kgs in the previous 20 months.

Upon interrogation, the patient also admitted experiencing urinary symptoms including dysuria urgency and urinary retention one year earlier but said these symptoms had resolved spontaneously.

Sadly the patient died eight months after diagnosis with metastatic prostate cancer, due to disseminated disease.

Because the skin is an uncommon site for metastasis from prostate cancer, its presence is associated with a poor prognosis.

The authors explained: “Varied presentations of cutaneous metastases resulting from internal malignancies have been reported and described as diagnostic challenges for clinicians.”

In one review of the literature from a PubMed database, scientists retrieved 59 articles documenting 31 cases of this diagnosis.

In only 15 percent of these cases did the skin lesions help to establish the initial diagnosis of prostatic cancer, however.

In advanced cases of prostate cancer or metastatic prostate cancer – when symptoms are most likely to emerge – patients tend to experience urinary retention and bone pain.

In a recent case study, a prostate cancer patient called Alan Kerr highlighted the importance of PSA tests for an early diagnosis.

In 2019, Alan went on holiday to Tenerife when he fell ill with gastroenteritis.

During a visit to a GP while on holiday he had his blood checked, which revealed he had raised prostate-specific antigen(PSA) of 5.5ng/ml.

Autopsy studies suggest that one in three men over the age of 50 have some cancer cells in their prostate, but when PSA levels exceed 3ng/ml, this could indicate that there’s an underlying issue.

He was therefore referred to the hospital to undergo further tests, which is when he was formally diagnosed with prostate cancer, at the age of 65.

“They checked my prostate and said it seemed slightly hard to touch around the edges. Then I had an MRI scan and a biopsy, which is when I was diagnosed with prostate cancer at the age of 65,” he said.

The diagnosis revealed that Alan had slow-growing cancer cells as well as a low number of medium-growing ones, which warranted immediate treatment.

“Even though I had a delay of around a year, I was still fortunate enough to catch it early on,” commented Alan.

Prostate cancer in most cases starts to develop at the age of 50 years and reaches its peak incidence around the age of 60 to 70, so men are encouraged to have PSA tests more frequently as they get older.