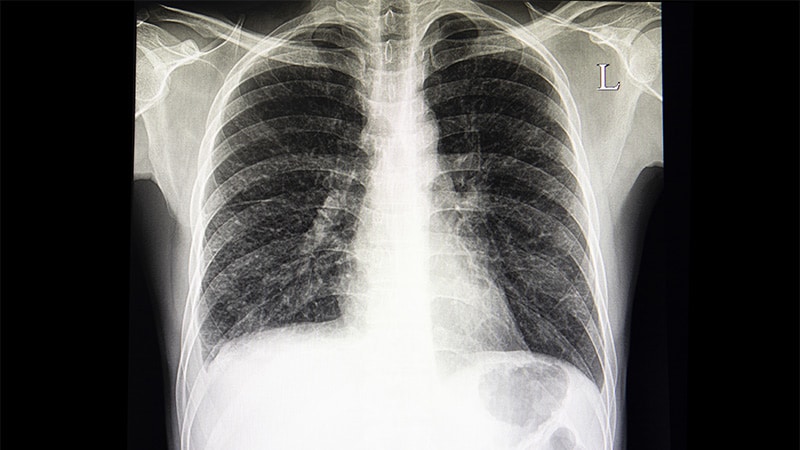 Lung disease as an adverse effect of the targeted cancer drug trastuzumab deruxtecan (T-DXd, Enhertu) is not negligible, although the benefit-to-risk relationship with use of the drug is still positive, say researchers who report a review of early clinical trials with the drug.

Trastuzumab deruztecan is a monocloncal antibody that targets HER2. It is approved for use in HER2-positive breast, gastric, and lung cancers.

In the new study, investigators analyzed data from early clinical trials that involved patients with advanced cancers who had been heavily pretreated. They found an incidence of just over 15% for interstitial lung disease (ILD)/pneumonitis associated with the drug. Most patients (77.4%) had grade 1 or 2 ILD, but 2.2% of patients had grade 5 ILD.

“Interstitial lung disease is a known risk factor in patients treated with antibody conjugates for cancer,” commented lead author Charles Powell, MD, Janice and Coleman Icahn School of Medicine, New York. This adverse effect can lead to lung fibrosis and can become severe, life-threatening, and even fatal, the authors warn.

The authors also discuss management of the event, which involves corticosteroids, and they recommend that any patient who develops ILD of grade 3 or higher be hospitalized.

Close monitoring and proactive management may reduce the risk of ILD, they suggest.

Indeed, they note that the incidence of this adverse effect was lower in a later phase 3 trial of the drug (10.5% in the DESTINY-Breast03 trial) and that the adverse events were less severe in this patient population (none of these events were of grade 4 or 5).

“Increased knowledge…and implementation of ILD/pneumonitis monitoring, diagnosis, and management guidelines” may have resulted in this adverse effect being identified early and treated before it progressed, they comment.

ILD is highlighted in a black box warning on the product label.

The study was published online on August 11 in ESMO Open.

These patients had advanced cancer and had been heavily pretreated with a median of four prior lines of therapy. They received one or more doses of at least 5.4 mg/kg of T-DXd.

Nearly half of the cohort were treated for more than 6 months. A total of 276 potential ILD/pneumonitis events were sent for adjudication; of those, 85% were adjudicated as ILD/pneumonitis.

“Rechallenge with T-DXd after complete resolution of grade 1 events is possible and warrants further investigation,” they comment. They caution, however, that rechallenge is not recommended for all patients, at least not for those with grade 2 or higher ILD/pneumonitis.

Overall, the authors conclude that the “benefit-risk of T-DXd treatment is positive,” but they warn that some patients may be at increased risk of developing ILD/pneumonitis

Baseline factors that increase the risk of developing an ILD/pneumonitis event include the following: being younger than 65 years; receiving a T-DXd dose of >6.4 mg/kg; having a baseline oxygen saturation level of <95%; having moderate to severe renal impairment; and having lung comorbidities. In addition, patients who had initially been diagnosed with cancer more than 4 years before receiving the drug were at higher risk of developing ILD/pneumonitis.

“Using learnings from the early clinical trials experience, physician education and patient management protocols were revised and disseminated by the study sponsors [and] more recent trial data in earlier lines of therapy has demonstrated lower rates of ILD events, suggesting close monitoring and proactive management of ILD/pneumonitis is warranted for all patients,” Powell said in a statement.