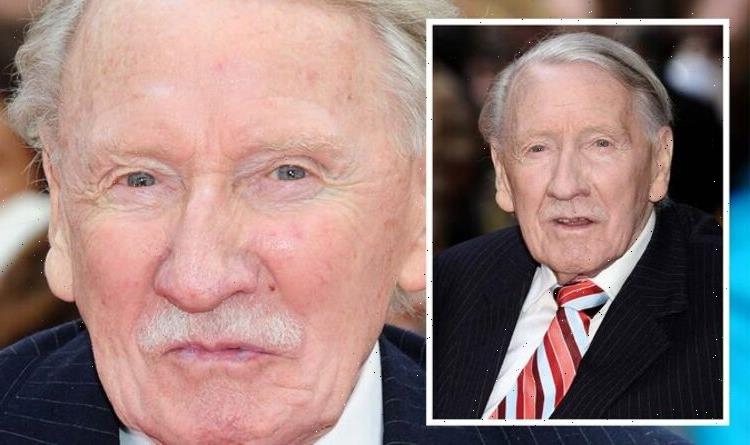 Countdown: Hewer recalls time he thought he was having a stroke

Phillips, 97, had two strokes that were just six months apart. In both instances his wife Zara, 36 years his junior, had to save him. The star, who was 90 at the time of his strokes, is famous for his role in Carry On, and has starred in dozens of films, including Harry Potter in which he starred as the snidey sorting hat. He fought in world war 2 from 1943 as a Second Lieutenant in the Royal artillery.

“I’m too young to pop off just yet. I’ve got everything to live for,” the star said to the Mirror after his first minor stroke.

It happened on a bus near his home in Maida Vale, north London on the way back from shopping on Oxford Street.

Fortunately, Phillips survived the ordeal as Carr sounded the alarm early. The Mirror reported that doctors said he wouldn’t have made it if it wasn’t for his wife’s fast response.

Talking about the ordeal, Carr said: “Thank God I was there to save his life.”

She told the Daily Mail: “Leslie suddenly started leaning on me and was unable to put a ticket in his coat pocket. He had terrible pains in his left arm so I stopped the bus and called an ambulance which took him to University College Hospital in Euston.”

Carr had high hopes that the stroke wouldn’t be debilitating for Phillips.

“I’m 100 per cent hopeful of him making a full recovery and of being able to take him back home,” Carr told the Mirror.

He did recover but just six months later, the two found themselves in a similar position.

Phillips suffered a second minor stroke, only to be resuscitated by his wife this time. This time, his symptom was a minor seizure, which made him turn “black and blue”.

He was given tests at St Mary’s Hospital in Paddington but spent the night at home.

Strokes are caused when there is a disruption to blood flow in the brain, which starves the brain cells of oxygen.

Within minutes, cells can start dying, which threatens devastating consequences, such as problems with communication and memory.

Because of how quickly the consequences of a stroke set in, it is important to react as quickly as possible.

The NHS advises people to dial 999 immediately if they see any signs of stroke symptoms.

Stroke can lead to problematic health months or years after the initial stroke, such as immobility which can cause a heightened risk of deep vein thrombosis, also known as a blood clot.

Aside from the two-strokes, Phillips has had another health scare. After his marriage with Carr, a year before the first stroke, Phillips had to call off their honeymoon so that doctors could inspect a facial lump.

He underwent surgery to remove the lump, which wasn’t cancerous.

At the time, he told the Sunday Mirror: “We won’t be going [on the honeymoon] straight away because I’ll be in hospital.

“I have to get this thing removed. Thank God, it isn’t cancer. It just looks rather awful at the moment but I am getting that sorted. We have been for all the appointments and the next part will be in a couple of weeks.”