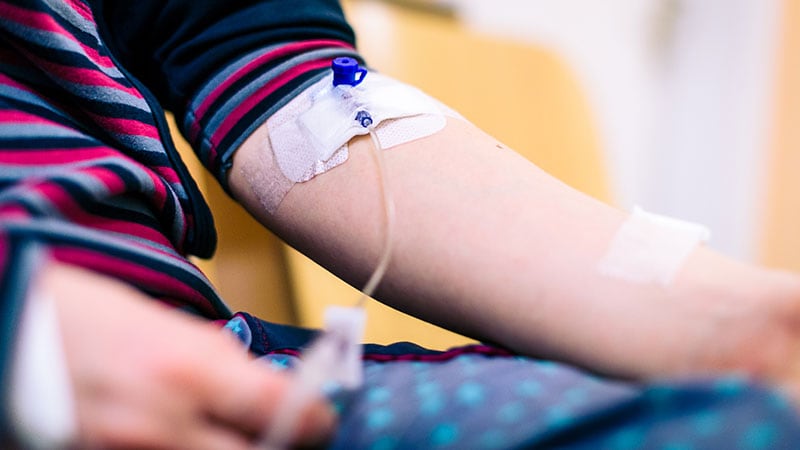 The effect was perhaps most notable for reducing suicidal ideation, he said.

“In 2 weeks, we can take somebody from being suicidal to non-suicidal. It’s a total game changer,” Oliver added.

Every year in the United States, about 12 million individuals think about suicide, 3.2 million make a plan to kill themselves, and more than 46,000 succeed, the investigators note.

The findings were published online September 12 in The Journal of Clinical Psychiatry.

Primarily used as an anesthetic in hospitals, ketamine is also taken illegally as a recreational drug. Users may aim for an intense high or feeling of dissociation, or an out-of-body–type experience.

Ketamine is a mixture of two mirror-image molecules. An intranasal version of one of these molecules (esketamine) is approved by the US Food and Drug Administration for TRD. Both esketamine and ketamine are believed to increase neurotrophic signalling that affects synaptic function.

The study included 424 patients (mean age, 41.7 years) with major depressive disorder or another mood disorder and who received at least one ketamine infusion at a specialty clinic. Most participants had failed prior medication trials.

Patients in the study were typically started on 0.5 mg/kg of ketamine, with the dose titrated to achieve symptoms of partial dissociation. The median dose administered after titration was 0.93 mg/kg over 40 minutes.

The main treatment course of at least six infusions within 21 days was completed by 70% of the patients.

At each clinic visit, all participants completed the Patient Health Questionnaire-9 (PHQ-9) and the Generalized Anxiety Disorder-7 (GAD-7).

“Blows It Out of the Water”

These results compare favorably to other depression treatments, said Oliver. “Truthfully, with the exception of ECT [electroconvulsive therapy], this blows it all out of the water,” he added.

Oliver noted that the success rate for repetitive transcranial magnetic stimulation is 40%-60% depending on the modality; and for selective serotonin reuptake inhibitors, the success rate “is somewhere between the mid-20s and low-30s percent range.”

Another outcome measure was the self-harm/suicidal ideation item of the PHQ-9 questionnaire, which asks about “thoughts that you would be better off dead, or of hurting yourself in some way.” About 22% of the study participants no longer reported suicidal ideation after three infusions, 50% by six infusions, and 75% by 10 infusions.

By 15 infusions, 85% no longer reported these thoughts. “Nothing else has shown that, ever,” said Oliver.

Symptoms of generalized anxiety were also substantially improved. There was about a 30% reduction in the GAD-7 score during treatment and, again, most of the response occurred by 4-6 weeks.

Sex, age, and other demographic characteristics did not predict response or remission, but suicide planning trended toward higher response rates (P = .083). This suggests that a more depressed subgroup can achieve greater benefit from the treatment than can less symptomatic patients, the investigators note.

A history of psychosis also trended toward better response to treatment (P = .086) but not remission.

The researchers note that study limitations include that it was retrospective, lacked a control group, and did not require patients to be hospitalized — so the study sample may have been less severely ill than in other studies.

In addition, most patients paid out of pocket for the treatment at $495 per infusion, and they self-reported their symptoms.

As well, the researchers did not assess adverse events, although nurses made follow-up calls to patients. Oliver noted the most common side effects of ketamine are nausea, vomiting, and anxiety.

Previous research has suggested that ketamine therapy is not linked to long-term side effects, such as sexual dysfunction, weight gain, lethargy, or cognitive issues, said Oliver.

The investigators point out another study limitation was lack of detailed demographic information, such as race, income, and education, which might affect its generalizability.

He also speculated about who can afford the treatment because only a few patients in the study were reimbursed through insurance.

Movahed Rad was not involved with the current research but was principal investigator for a recent study that compared intravenous ketamine to ECT.

He questioned whether the patient population in the new study really was “real world.” Well-designed randomized controlled trials have been carried out in a “naturalistic setting, [which] get closer to real life patients,” he said.

He also noted that the median dose after clinician titration (0.93 mg/kg/40 m) “may be considered very high.”

With regard to doses being titrated to achieve symptoms of partial dissociation, “there is no obvious evidence to my knowledge that patients need to develop dissociative symptoms in order to have antidepressant effect,” said Movahed Rad.

Finally, he noted that the finding that 28% of the participants were using illegal drugs “is worrying” and wondered what drugs they were taking; he also questioned why 81% of the study population needed to take antidepressants.

The study did not receive outside funding. Oliver is the founder of MindPeace Clinics, which specialize in ketamine therapeutics. Movahed Rad has reported no relevant financial relationships.