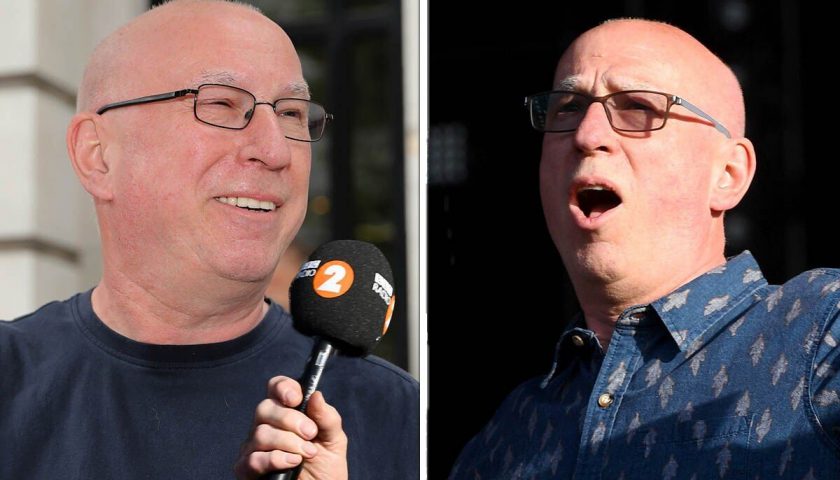 The radio DJ first started on BBC Radio in 1978, before moving to Radio Two in 1985. Since then, his hugely popular show rakes in a “fairly consistent” audience of 8.3 million, a 21.7 percent share of all listeners. With daily features such as PopMaster, it came as no surprise that back in 2021, Bruce was voted “Britain’s favourite radio presenter”. Due to this, fans would be delighted to know that back in 2021, Bruce admitted to wanting to “die on air”, and never retire from the job he loves so much.

During the 2021 interview, Bruce said: “I’m going to die in harness, I think. I’ll just keep going, I think.

“I’ve found over the last year when I’ve been working from home, although that’s very different, I still get a huge buzz from being on the radio, I love it.

Bruce went on to admit that when he turned 55 years of age, he thought that his time on Radio Two might be coming to an early end, especially as he moved “out to the country” in Oxfordshire.

He continued to say: “I don’t think I’ll stop doing it, if I don’t do it on Radio Two, I’ll do it somewhere else.

“Even if it’s me in my old folks’ home reading out the news bulletins to the other residents I’ll still be doing that sort of thing because I just love it. I want to do it and you feel better for doing it every time you get on air.

“Around 15 years I thought my days would be very much numbered on Radio Two because I was getting older, I was in my late 50s by that time, 55.

“I thought, ‘Well I’ll move out to the country, I’ll live in Oxfordshire and maybe a year or two down the line they’ll get rid of me.’ They have done that sort of thing in the past and I’ve dodged a few bullets, I’m well aware of that, I’ve been very lucky to keep going because I just managed to dodge aside when they were firing.

“I’m delighted to still be there but most of the last 15 years I’ve felt have been bonuses, I’ve been lucky to keep on working there.

“I was almost looking at an early semi-retirement when we moved out here but that has proven to be the case. It’s a bit of a commute, it’s a bit of a schlep in and out every day but it’s well doable, I’m very glad to still be doing it.”

Away from the radio, Bruce said that he leads a “normal life”, perhaps something that allows him to continue working for as long as, and as successfully as he has.

He added: “Broadly speaking, I do normal life: things going wrong with your washing machine, children not cleaning their bedrooms. I don’t go to showbiz parties, but I wouldn’t talk about it if I did.

“If you talk about digging the garden – not everyone’s got a garden. Not everyone can afford a car. You have to not say things that’ll make people think, ‘He doesn’t begin to understand my life’.”

In addition to keeping active and healthy, Bruce reflected on the change in culture he has observed over time and the habits he has given up in older age. He said: “We used to smoke in the studio, and the drinking culture – God, it was massive.”

With no publicly known health conditions or problems, it seems that the secret to Bruce’s health and longevity is doing a job he loves. But does this have any credibility to it?

Well, according to a study from 2013 that looked at the blood samples from 5,500 people, results showed that unemployment in early adulthood can be damaging to your health.

The scientists made this surprising link by studying blood samples and unemployment records of more than 5,500 men and women aged 31. The blood was used to measure tiny structures called telomeres – biological caps which are found at the ends of chromosomes that protect the DNA from damage, much like the caps on the ends of shoelaces prevent fraying.

The study explained that as we get older, telomeres get shorter, leading to DNA becoming damaged and increasing the risk of age-related illnesses such as Alzheimer’s disease, diabetes and heart disease.

This research revealed a clear link between long-term unemployment and telomere length, as men who had been out of work for at least two of the three years before their blood was taken were more than twice as likely to have short telomeres as those who had been in continuous employment.

Even more importantly, the link held even when other factors associated with ageing, including illness, smoking, drinking and lack of exercise were taken into account. At the time, researcher Jessica Buxton, of Imperial College London, said this suggests that the financial and emotional stress associated with being out of work was to blame.