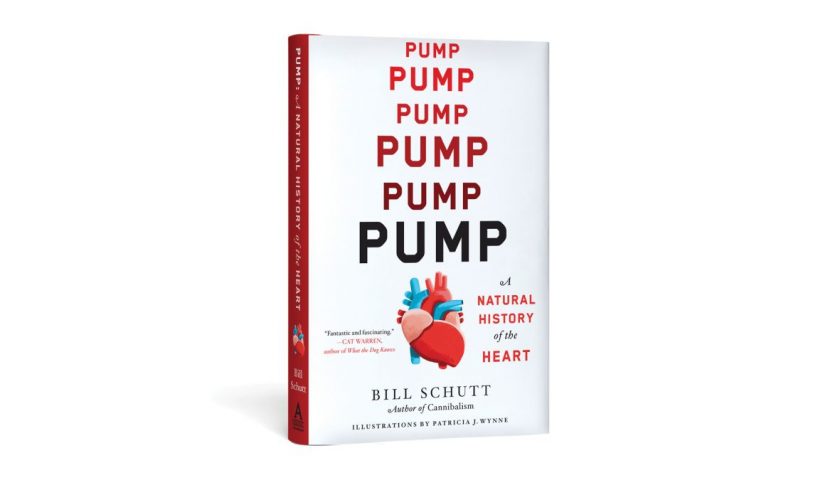 Does the idea of winning a prize make your heart beat a little faster? If so, you may want to enter for a chance to win a copy of “Pump: A Natural History of the Heart” (Sept. 21, Workman Publishing), the new book by writer and zoologist Bill Schutt, in a Live Science giveaway.

For millennia, the function and importance of this singular organ has fascinated humans around the world, with ancient civilizations identifying the heart as the source of human emotions and intellect, and the seat of the soul itself.

How did this all-important organ evolve, why do some animals’ hearts pump natural antifreeze, and will scientists ever be able to grow hearts in the lab? Live Science will explore these and other heart-related questions tomorrow (Sept. 14) at 3:00 p.m. EDT, as we sit down for a live conversation with Schutt about his new book.

Join us to find out all about heart-pounding science, from bizarre (by today’s medical standards) antiquated approaches to diagnosing and treating perceived heart issues, to modern discoveries that inform state-of-the-art heart therapies, treatments, reconstructions and transplants.

Viewers will also have the chance to test their knowledge of heart history, in a Live Science giveaway.

At the beginning of the event, we’ll pose a trivia question from the pages of “Pump.” To enter to win a free copy of “Pump,” listen for our trivia question and then correctly answer it in the Facebook comments. We’ll randomly pick one winner (see the terms and conditions below).

Once the event begins, you’ll be able to find the livestream on our Facebook, Twitter or YouTube pages, where you can leave your answer for the giveaway — and ask Schutt your most heartfelt questions about heart science!

NO PURCHASE NECESSARY. Open to legal residents of 50 U.S & D.C., 18 or older. Employees, agents, officers & directors of Future US, Inc (“Sponsor”), its parent, subsidiaries, affiliates & advertising & promotion agencies (collectively with Facebook, Inc., “Released Parties”) & members of their immediate family (spouse, parent, children, siblings & their respective spouses, regardless of where they reside) & persons living in the same household, whether or not related, are not eligible. Void where prohibited. Subject to all applicable federal, state & local laws.

HOW TO ENTER: At any time between 3:00 p.m. ET on Tuesday, Sept. 14, 2021, and 3:00 p.m. ET on Wednesday, Sept. 15, 2021 (the “Entry Period”), visit the Live Science page on Facebook (“Event Page”), find the post about the giveaway and answer the trivia question posed during the interview with Bill Schutt, author of “Pump” (“Event”) via a comment to the post. If, for whatever reason, the Event is cancelled or postponed, this giveaway will not occur. Entries generated by script, macro or other automated means or by any means that subvert the entry process are void. Limit one (1) entry per person/Facebook ID. Multiple entries will be void. Entries become the sole property of Sponsor. Entry must not be offensive or inappropriate, as determined by Sponsor in its sole discretion. Sponsor reserves the right to disqualify any entry and remove any comment that it determines, in its sole discretion, is not in compliance with these Official Rules or is otherwise not in keeping with Sponsor’s image.

WINNER DETERMINATION: One winner will be randomly selected from the eligible individuals who posted correct answers to the trivia question, as determined by Sponsor in its sole discretion, during the Entry Period. If, by the end of the Entry Period, no eligible comments are provided, the prize will not be awarded. Odds of winning depend on the number of eligible entries received.

WINNER NOTIFICATION: Potential winners will be notified via a comment on his/her winning post and via Facebook Messenger & he/she will have 24 hours from notification to respond to Sponsor. The failure to respond to such notification or the potential winner’s noncompliance with these Official Rules may result in disqualification, & at Sponsor’s sole discretion, prize may be awarded to an alternate winner.

Prize: A copy of “Pump” (1 prize available). Approximate Retail Value: $26.95. Total Prize is awarded “as is” with no warranty or guarantee, either express or implied. Winner is responsible for all federal, state & local taxes. Winner may not substitute, assign or transfer prize, but Sponsor reserves the right, at its sole discretion, to substitute prize (or portion thereof) with one of comparable or greater value. Prize cannot be redeemed for cash. All prize details are at Sponsor’s sole discretion.

GRANT OF RIGHTS: By submitting an entry, each entrant grants to Sponsor and its licensees, successors and assigns an irrevocable, perpetual, unlimited, royalty-free, fully paid-up license to reproduce, distribute, display, exhibit, exploit, perform, edit, create derivatives of, & otherwise use the entry & all elements of such entry, together with any other material, and the name, user name, city & state of residence, voice, image and/or likeness of entrant, in any & all media now known or hereafter devised, in any manner, in whole or in part, worldwide, without compensation or notification to, or permission from, entrant or any third party, for any purpose whatsoever, including without limitation, for purposes of advertising or trade.

CONDITIONS: By participating, each entrant agrees: (a) to abide by these Official Rules & decisions of Sponsor & judges, which shall be final & binding in all respects relating to this giveaway; and (b) to release, discharge & hold harmless Released Parties from any & all injuries, liability, losses & damages of any kind to persons, including death, or property resulting, in whole or in part, directly or indirectly, from entrant’s participation in the Giveaway or the acceptance or use of prize. Released Parties are not responsible for (i) lost, late, incomplete, damaged, inaccurate, stolen, delayed, misdirected, undelivered or garbled entries; or (ii) errors or difficulties of any kind, whether human, mechanical, electronic, computer, network, typographical, printing or otherwise, relating to or in connection with the giveaway, including, without limitation, errors or difficulties which may occur in connection with the administration of the giveaway, the processing of entries, the announcement of the prize or in any giveaway-related materials. Persons who tamper with or abuse any aspect of the giveaway or the Event Page, who act in an unsportsmanlike or disruptive manner or who are in violation of these Official Rules, as solely determined by Sponsor, will be disqualified & all associated entries will be void. Should any portion of the giveaway be, in Sponsor’s sole opinion, compromised by virus, worms, bugs, nonauthorized human intervention or other causes which, in the sole opinion of the Sponsor, corrupt or impair the administration, security, fairness or proper play, or submission of entries, Sponsor reserves the right at its sole discretion to suspend, modify or terminate the giveaway & if terminated, at its discretion, select winner as deemed fair & appropriate by Sponsor. Information submitted in connection with this giveaway will be used in accordance with Sponsor’s Privacy Policy, available at https://www.futureplc.com/privacy-policy.

WINNERS’ NAME: The winner’s name will be posted on the Event Page following the end of the giveaway.

Sponsor: Future US, Inc., 555 11th Street Northwest Suite 600, Washington, DC 20004. This giveaway is in no way sponsored, endorsed or administered by, or associated with, Facebook. You understand that you are providing your information to Sponsor & not to Facebook.

Mindy Weisberger is a Live Science senior writer covering a general beat that includes climate change, paleontology, weird animal behavior, and space. Mindy holds an M.F.A. in Film from Columbia University; prior to Live Science she produced, wrote and directed media for the American Museum of Natural History in New York City. Her videos about dinosaurs, astrophysics, biodiversity and evolution appear in museums and science centers worldwide, earning awards such as the CINE Golden Eagle and the Communicator Award of Excellence. Her writing has also appeared in Scientific American, The Washington Post and How It Works Magazine.