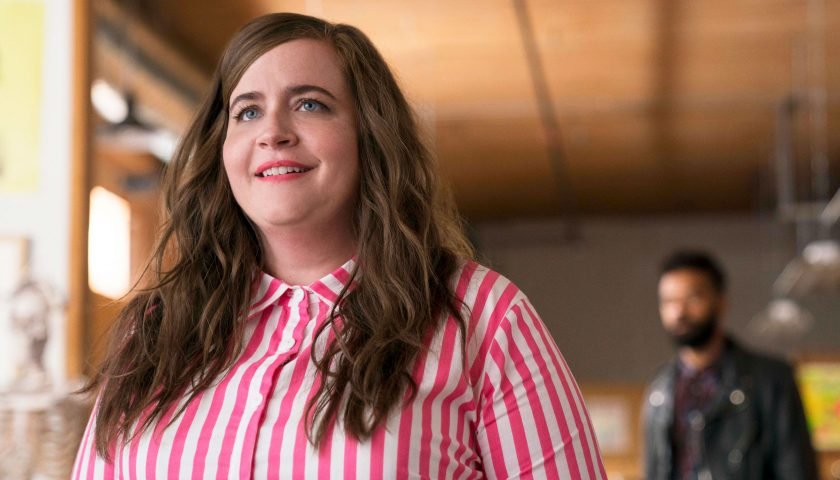 Hulu’s new show Shrill features Aidy Bryant, who plays Annie, a fat woman out to take control of her life—which, btw, doesn’t have anything to do with changing her weight. (FYI: The show is based on Lindy West’s memoir, Shrill: Notes from a Loud Woman.)

In the first episode, Annie takes the morning-after pill (a.k.a. Plan B), after a hook-up with a guy who is honestly the biggest jerk I’ve ever seen (he makes her exit his house through the back door when his roommates are home). But when she starts feeling weird and misses a period, Annie takes a pregnancy test and realizes she’s pregnant.

This isn’t supposed to happen—she took Plan B!—but when she takes it up with the pharmacist, the pharmacist bluntly asks, “Do you weigh over 175 pounds?” When Annie says yes, the pharmacist replies, “The morning-after pill is only dosed for women 175 pounds and under.”

I’ll spare you the rest of the story here because, spoilers (though def go watch it ASAP), but is this for real? Does the morning after pill really have a weight limit? And if so, WTF are plus-size women supposed to do about that?

How does Plan B work, again?

So, Plan B is an emergency contraceptive pill. It comes in the form of one tablet that contains 1.5 milligrams of levonorgestrel, a synthetic version of the hormone progesterone. You’re supposed to take it within 72 hours (three days) after having unprotected sex, according to the Plan B website, although the sooner you take it, the better.

The pill helps stop the release of an egg from your ovary. It may also help prevent the fertilization of an egg that’s already been released or by keeping a fertilized egg from implanting in your uterus (where it would then grow). But—and this is important—Plan B is not an abortion pill; again, it’s an emergency contraceptive.

So…does Plan B have a weight limit?

Let’s get this out of the way up front: The research on this isn’t totally clear, but there’s enough out there to suggest that Plan B is less effective in women who weigh more than 165 pounds (or 175 pounds, depending on what you’re looking at), and the effectiveness seems to be even less the more you weigh.

One 2011 study in the journal Contraception found that women who had a BMI greater than 25 (women who were, by BMI standards, overweight) were more likely to get pregnant after taking Plan B than their counterparts with lower BMIs.

This was followed by another study published in Contraception in 2015 that had similar results. Then, a meta-analysis published in 2016 in the same journal also suggested that “women with obesity experience an increased risk of pregnancy” after taking Plan B when compared to other women.

But here comes the conflicting data: A 2017 study published again in Contraception, didn’t find much of a difference in Plan B’s effectiveness, regardless of a woman’s BMI.

The FDA did address the data in 2016 in a “Consumer Questions and Answers” forum, but said that it was too limited and conflicted for them to add a warning label to Plan B. Still, this something doctors (and pharmacists) are aware of—and should still bring it up to patients who inquire about Plan B.

As far as a woman’s increased risk of pregnancy if she’s overweight and takes Plan B—the 2015 study found that women 176 pounds or more were six percent more likely than other women to get pregnant. “That’s similar to your risk of getting pregnant if you don’t use birth control,” says Christine Greves, MD, a board-certified ob/gyn at the Winnie Palmer Hospital for Women and Babies. Basically, Dr. Greves says there isn’t enough data to say that Plan B definitely will or won’t work for those with a higher BMI.

Well, should you still take Plan B if you’re over 165 pounds?

It’s generally recommended that you go ahead and take Plan B regardless of your weight or BMI, says Jessica Shepherd, MD, a minimally-invasive gynecologist in Dallas. Still, you’re probably not super comforted knowing that it might be less effective if your weight or BMI is higher.

That’s why Dr. Greves recommends calling your doctor and “having a heart to heart” about your options. One good treatment option is getting the copper IUD inserted, she says. This can help keep an egg from implanting in your uterus—and serve as birth control for you in the future, Dr. Greves says. (Just keep in mind that you’ll need to do this within five days after having unprotected sex for it to be helpful in this situation.)

You’ll specifically want to get the copper IUD, Dr. Greves says—its effectiveness doesn’t depend on your BMI or weight, while your weight-slash-BMI does matter with hormonal IUDs.

The bottom line: If you’ve had unprotected sex, weigh over 165 pounds, and want to take Plan B, have a conversation with your doctor, ASAP.