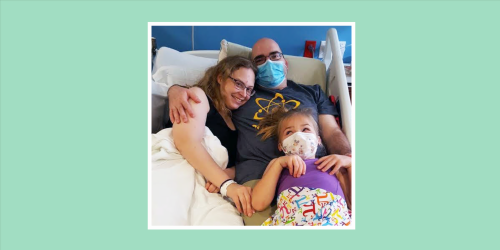 In early September 2017, my daughters came home from daycare with a stomach bug that made its way around the house. Everyone else got over it pretty quickly, but I didn’t. Instead, I became the sickest I’ve ever been in my life with a high fever, relentless cough, chills, and vomiting to the point where I couldn’t even keep down a few sips of water.

Before this, I’d been in relatively good health. At 32, I’d just returned to work as an attorney in the Dallas, Texas, area after maternity leave (I’m a mom of three) and I never took sick days. But for three days, I stayed home.

All I could really do was lay in bed under the blankets, hoping whatever illness I had would pass. After several days of not being able to keep any food or water down, I finally went to urgent care. There, a doctor ran blood work, gave me Zofran (an anti-nausea med), and sent me home.

Two days later, I received a call from the urgent care office.

As the days went on, I still couldn’t keep any food down and I started researching my symptoms to try to figure out what was wrong with me. I thought maybe I had a vitamin B12 deficiency and headed into urgent care again. There, the doctor advised me to go straight to the emergency room at the hospital down the street for fluids, a blood transfusion, and an appointment with a hematologist. At the ER, I did just that and was discharged with an appointment scheduled for two days later.

The next morning, a nurse from the hematologist’s office called and asked if I could come in that day. She told me there was a chance that the doctor might hospitalize me, so I might want to pack a bag.

I held out hope that it wasn’t a big deal, but I should have realized I was seriously ill.

I was too weak to drive, so my husband took me to my appointment. There, the hematologist told me that they needed to confirm my exact diagnosis with further testing, but based on my blood panels, I had a form of blood cancer, also known as leukemia.

Although Google had told me that this was a possibility when I’d begun researching my symptoms, it had seemed so imaginable. It felt surreal. People were talking around me and about me, but I don’t remember much of what they were saying. I was wheeled directly to the hospital across the street and immediately admitted. The first step was to get me into a stable condition.

Leukemia causes your body to produce an abundance of white blood cells, many of which are abnormal. And the white blood cells crowd out your red blood cells and platelets, which deprives your body of oxygen and prevents blood clotting. Because I was dehydrated and dangerously anemic, I received fluids and several units of blood. Afterwards, I felt better than I had in weeks. 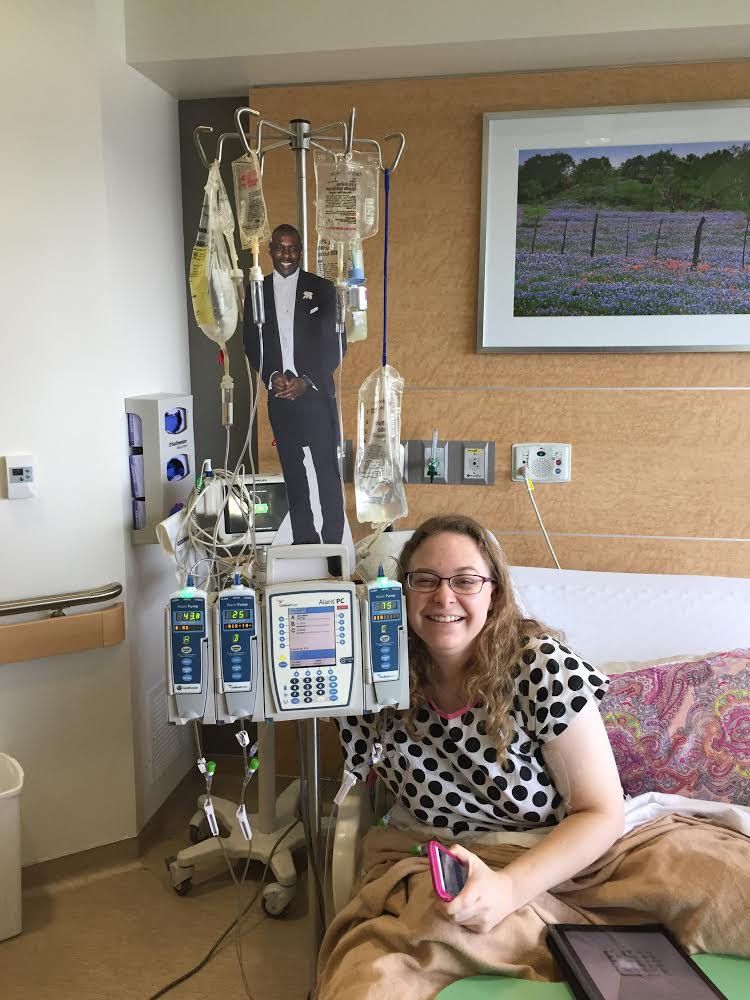 The doctor ran a whole host of tests to determine which type of blood cancer I had, how widespread it was, and if I had any chromosomal mutations, as those would inform the proper treatment for me.

About a week later, I was given an official diagnosis of acute myeloid leukemia.

It’s also called (AML), and it’s a rapidly progressive cancer of the blood and bone marrow that affects white blood cells known as myeloid cells. Within the United States, there are over 20,000 new cases every year, but the majority of those affected are older adults. When I asked how I ended up with this condition, my hematologist explained that my case wasn’t genetic but probably just random bad luck. 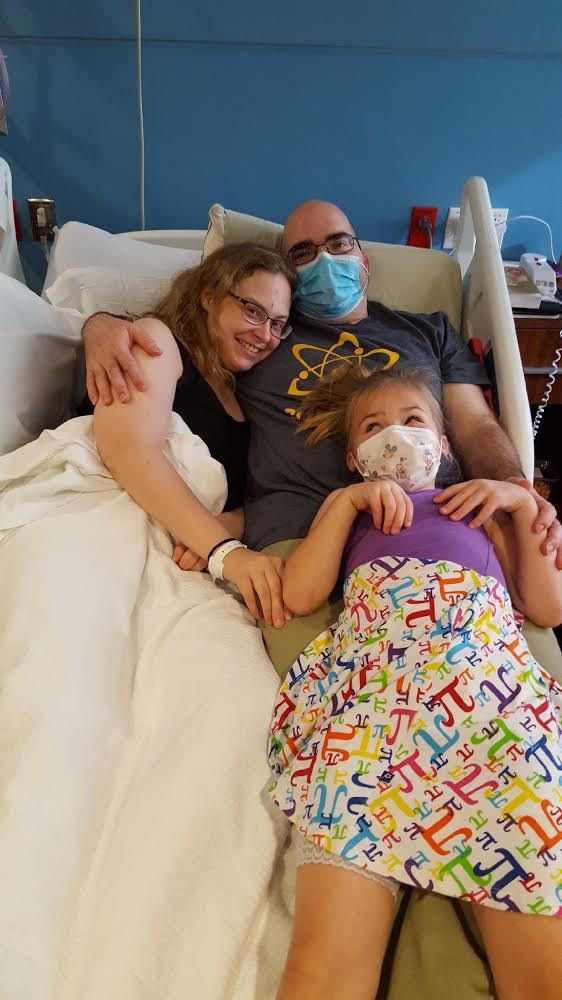 In most cases of AML, it’s not clear what exactly causes the DNA damage that in turn leads to the haywire production of abnormal white blood cells. Many people who end up with this type of blood cancer, like me, have no known risk factors (some of which include being a smoker, male, and over the age of 65). Early signs of AML, including fever, body aches, and fatigue, often seem like a case of the flu or bug.

In October 2017, a month after my “stomach bug” first appeared, I was readmitted to the hospital and began a round of intensive remission induction chemotherapy in order to kill the leukemia cells in my blood and bone marrow.

For my first round, I stayed in the hospital for about a month. I was not allowed to leave the “clean floor,” where filtered air was continuously pumped into the rooms and visitors were scanned for fever and illness before they were able to be near any patients. Staff and visitors wore face masks and plastic smocks as an additional layer of protection.

The hardest part of chemo was that my daughters were not allowed on my hospital floor.

Children under 12 weren’t allowed on the “clean floor,” so I wasn’t able to see my daughters for almost a month. We used FaceTime a few times, which was simultaneously great and excruciating because I just wanted to reach out and snuggle them but I knew I couldn’t.

Every morning, my medical team would check my blood cell counts to determine if I’d need a unit of blood or platelet infusion. I couldn’t be discharged from the hospital until my white blood cell count had recovered enough from the chemotherapy for it to be safe for me to leave the clean floor. 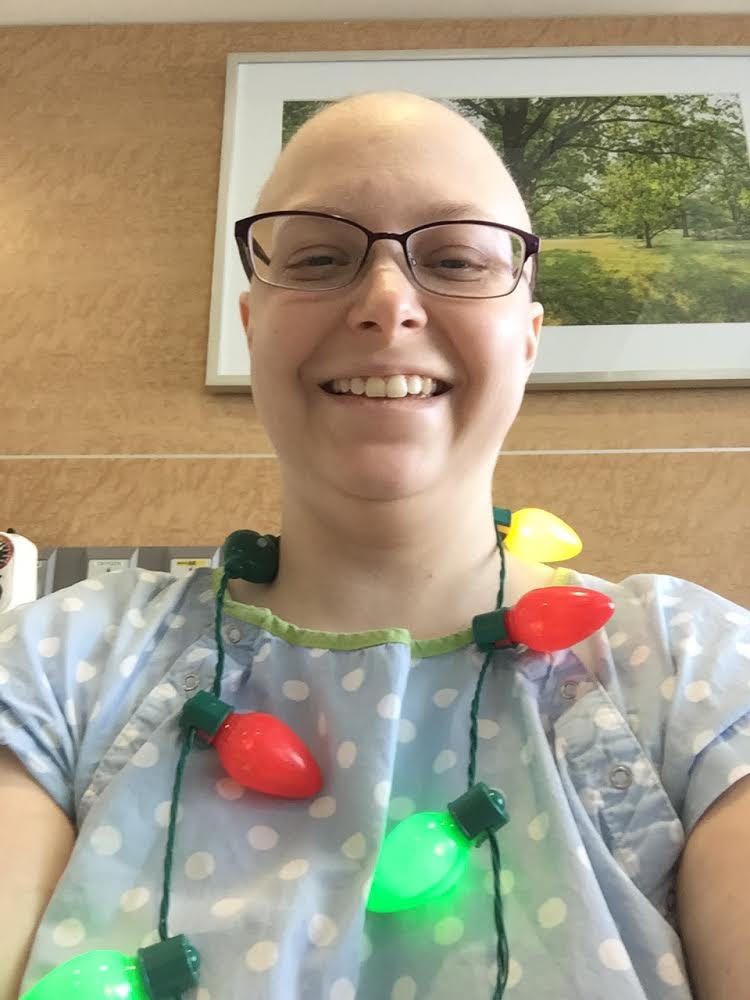 After the induction round, I was discharged. Another bone marrow biopsy showed that I was in complete remission, meaning that my blast count in my bone marrow was less than 5 percent. But I wasn’t totally in the clear just yet.

For my second half of treatment, I had to undergo four more rounds of consolidation chemotherapy to destroy any remaining cancer cells in order to lower my risk of relapse. While these rounds were “gentler,” I still struggled. Eight weeks in, my bone marrow was so severely damaged from chemotherapy it began to fail, and I had to get a transplant.

The transplant itself only took about an hour. But after that, it was a waiting game. Every day, my blood was tested, and we waited for the new stem cells to start producing new blood cells and immune system cells. I was also monitored carefully for any signs of infection, which is a huge risk after this type of procedure. My blood cell counts steadily rose, and I was discharged from the hospital after 28 days.

By August 2018, nearly a year into my journey, I went back to work and resumed my “normal” life.

A few months later, in October, I participated in Light the Night, a celebratory walk and fundraiser sponsored by the Leukemia & Lymphoma Society (LLS). At the event, I heard about another LLS fundraiser, The Big Climb Dallas, where participants climb the tallest building in the city: the Bank of America Tower. It’s 70 flights of stairs. and I had no idea if I could do that, but I’d caught the fundraising bug. I recruited about 30 friends, family members, and coworkers to climb with me, and I made it to the top. 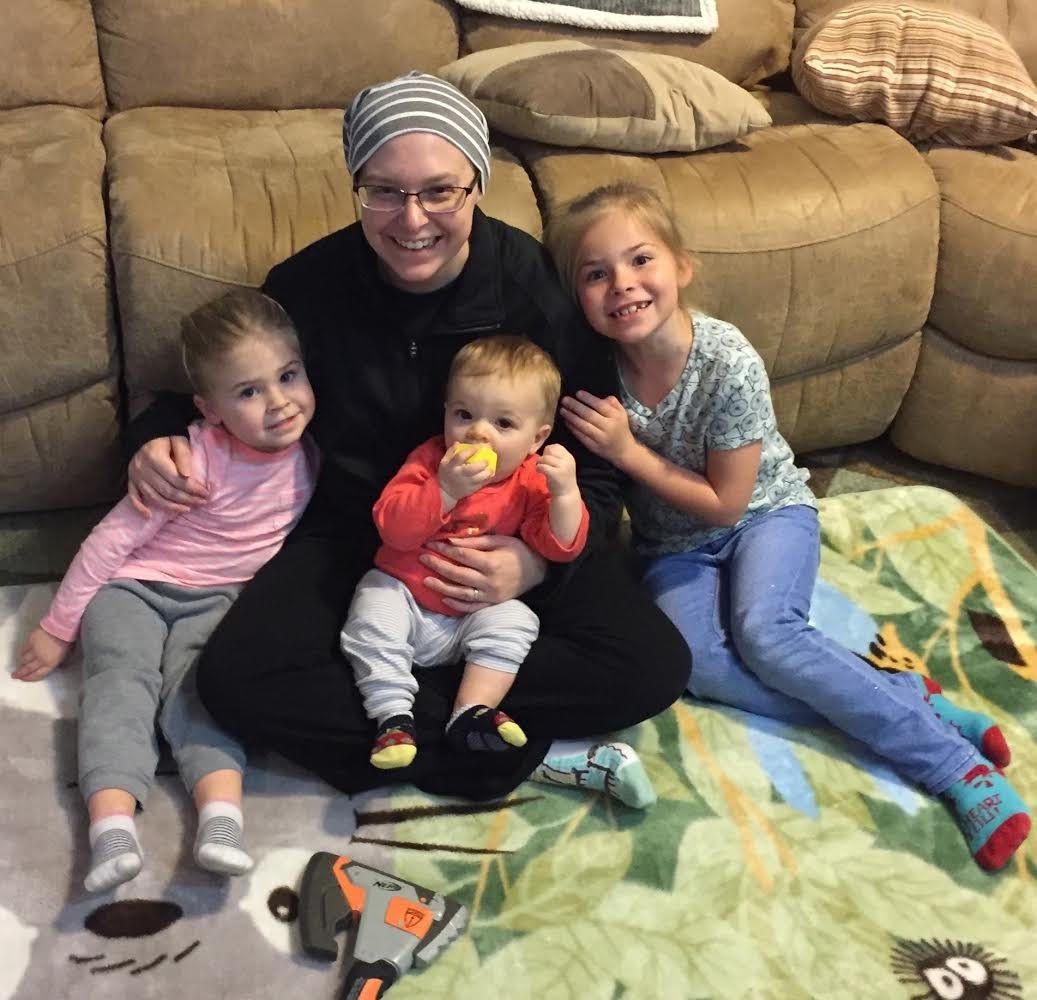 As the leader of one of the top fundraising teams, I was asked to join the planning committee for the Big Climb 2020, which I enthusiastically accepted. This year, I was extremely grateful to be named the Honored Hero of Big Climb Dallas 2020 and to represent survivors and supporters whose lives have been touched by blood cancer.

It was a long process to get diagnosed and treated, but two and a half years later, I’m in full remission.

Funny enough, I’m ultimately thankful that my daughters got sick at daycare (as strange as that might sound). If they hadn’t, I may have gone several more months before getting a diagnosis and treatment. Today, I’m happy to share my story in the hopes that it might help even one other person.