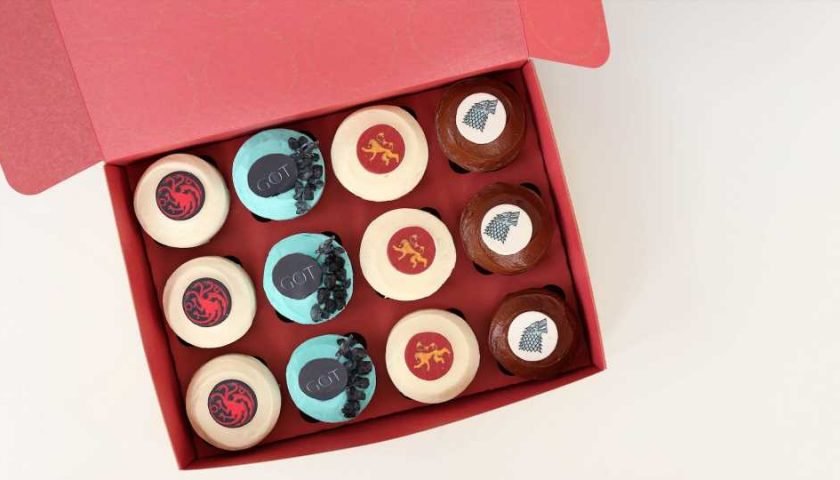 In three short days, the HBO hit that’s toyed with our emotions à la Jamie Lannister will sadly come to an end. And it’s all the more reason many, if not all of us are in the midst of planning of a Game of Thrones finale watch party. For those who are, Sprinkles has dessert covered with their limited-time Game of Thrones cupcakes.

And when we say “limited time,” we mean very limited.

The GoT cupcakes are only available from May 17 through 19, and they’re offering three options: a la carte cupcakes, a box of one dozen ‘cakes and a “bake box,” which we’ll explain in just a second.

Appropriately, the new cupcake is a dragon fruit lemon cake frosted with a thick layer of ice blueberry buttercream and topped off with a black cherry-flavored candy dragon glass adorned with the GoT logo.

If you’re planning for a larger party, it might be wise to fork up the extra cash for the dozen, which comes with three Game of Thrones cupcakes and three of Sprinkles’ classic flavors: red velvet, vanilla and dark chocolate. But these aren’t your average cupcakes; the red velvet cupcakes are adorned with the Targaryen sigil, the vanilla with the Lannister sigil and the dark chocolate with the Stark sigil.

Now, the bake box goes above and beyond offering everything you’ll find in the dozen, but Sprinkles also throws in four cookies, four brownies and two frosting shots, so you can ice the cookies either an ice blueberry buttercream and dark chocolate buttercream flavor.

Hey, carbs don’t count on Game of Thrones finale night, especially since we’ll all be burning calories screaming at the television and crying our faces off once the credits roll.

Sprinkles’ Game of Thrones cupcakes are available now for preorder.