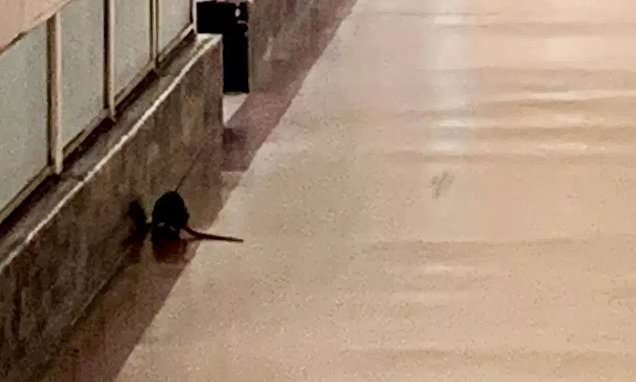 A huge rat was spotted scurrying around a corridor leading to an NHS maternity wing.

The rodent was pictured sniffing about on a basement corridor at Lincoln County Hospital on Saturday.

The hospital said it was investigating the sighting and claimed building works may have disturbed the rat’s ‘natural habitat’. 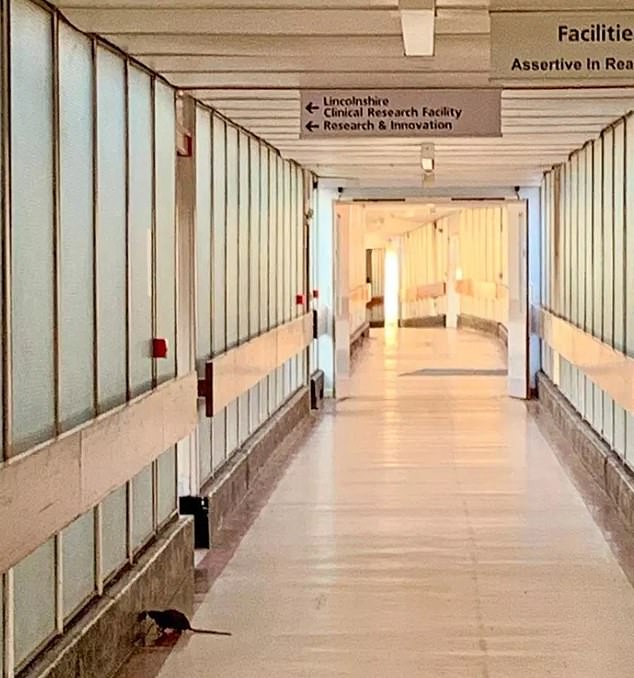 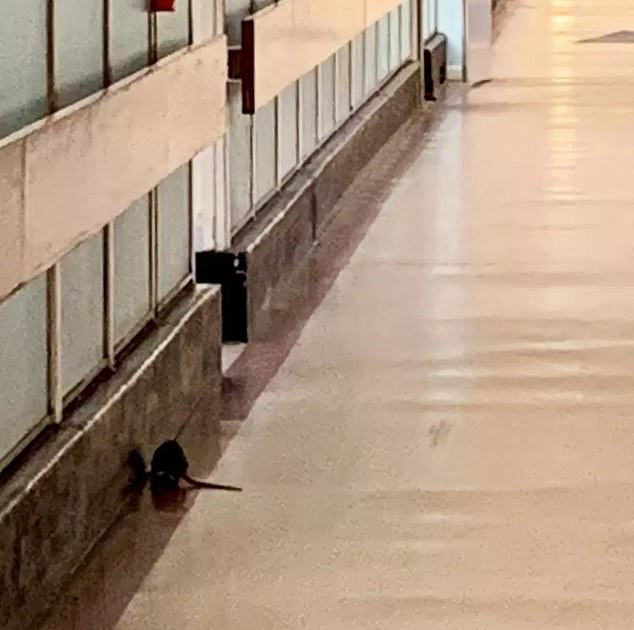 Paul Boocock from United Lincolnshire Hospitals Trust said: ‘We are currently carrying out some building works on site, which may have disturbed its natural habitat’

The shocking photo was taken by an anonymous man and then shared with The Lincolnite.

The man who took the photo said: ‘I was visiting a friend on the maternity ward and as I was walking there I noticed something moving on the corridor.

‘The rat was just walking the whole length. Someone else walked past but didn’t seem fazed at all.’

A pregnant woman told The Sun: ‘There were a dozen mothers and their partners crammed into a tiny room. Some of us had to stand.

‘The facilities are just not fit for purpose. Rats in the corridors is the final straw.’

Paul Boocock from United Lincolnshire Hospitals Trust said: ‘We are currently carrying out some building works on site, which may have disturbed its natural habitat.

‘This is the only reported sighting we are aware of and have already instructed pest control contractors to fully investigate.’

Rats can damage property and carry diseases such as leptospirosis, which causes kidney failure and death if passed on to humans.

The bug is thought to have killed at least four people in Britain since 2009, including a former Olympian, and left many more with life-changing issues.

WHAT IS WEIL’S DISEASE?

Leptospirosis, also known as Weil’s disease, is a rare infection spread by the urine of animals including rats, mice, cows, pigs and dogs.

The infection is more common in warmer, tropical climates.

Symptoms include fever, headache, feeling and being sick, aching muscles and joints, red eyes, and a loss of appetite.

Serious cases of the infection can cause yellow skin and eyes (jaundice), swollen ankles, feet or hands, chest pain, shortness of breath or coughing up blood.

Anyone who suspects they have Weil’s disease should see a doctor urgently.

It can be treated with antibiotics and may take between a few days and a few weeks to clear up.

Without treatment the infection could take months to recover from, and could cause life-threatening kidney and liver failure.

The infection is rare but people who do lots of outdoor activities or work with animals or animal parts can avoid catching it by washing their hands regularly, cleaning and covering wounds, wearing protective clothing, and getting their dog vaccinated.