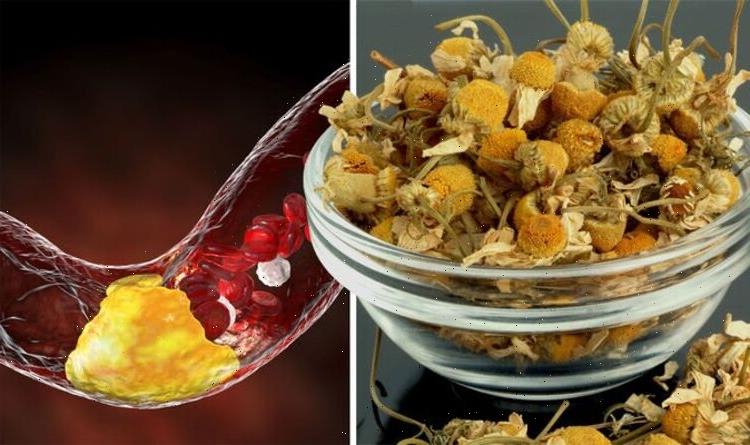 The prevalence of high cholesterol in the UK has long been a medical concern, particularly because the condition can pave the way to other deadly ailments like heart attack and stroke. This happens because “bad” cholesterol molecules are deposited on the arterial walls. Fortunately, measures exist to prevent this from happening. According to a new study, two herbal teas could slash lipid levels significantly enough to ward off health complications further down the line.

Low-density lipoprotein, also known as LDL cholesterol, is dubbed “bad” cholesterol because it pads the arteries, causing the passageways to narrow over time.

This prevents nutrient-rich blood from reaching vital organs such as the heart and brain, which then become susceptible to an attack.

Statins have come to play a key role in the fight against the disease, but some natural ingredients may be just as beneficial.

According to a recent study conducted by the Tea Advisory Panel, German chamomile tea and spearmint tea could alter lipid levels.

In addition to benefits for cholesterol, the study highlighted the positive effect of both beverages on glucose levels.

The results are consistent with those of an early study published in the Journal of Endocrinological Investigation in 2015, which found that chamomile tea could significantly lower blood sugar levels in weeks.

The study, which was performed on 64 diabetics, noted that patients had significantly lower blood sugar levels after eight weeks, compared to patients who drank water.

The researchers put the beneficial effects of both teas down to a range of plant compounds including flavonoids.

The study’s co-author Doctor Pam Mason, explained: “Spearmint has traditionally been used in herbal medicine for a plethora of digestive disorders including indigestion, IBS and diarrhoea.

“The evidence highlights that natural compounds such as these have anti-inflammatory and blood vessel dilating properties.”

“The tea has mildly sedative properties which helps the body to regulate sleep.”

There is evidence that spearmint tea contains levels of antioxidants high enough to prevent free radicals from damaging cells.

In fact, antioxidants provide many health benefits to humans, notably by protecting the body against multiple diseases.

Some of the antioxidants found in tea are flavonoids, which have historically been beneficial for both cholesterol management and blood pressure.

These dietary antioxidants could be beneficial in the development of cardiovascular disease, diabetes, cancer, and cognitive diseases such as Alzheimer’s and dementia.