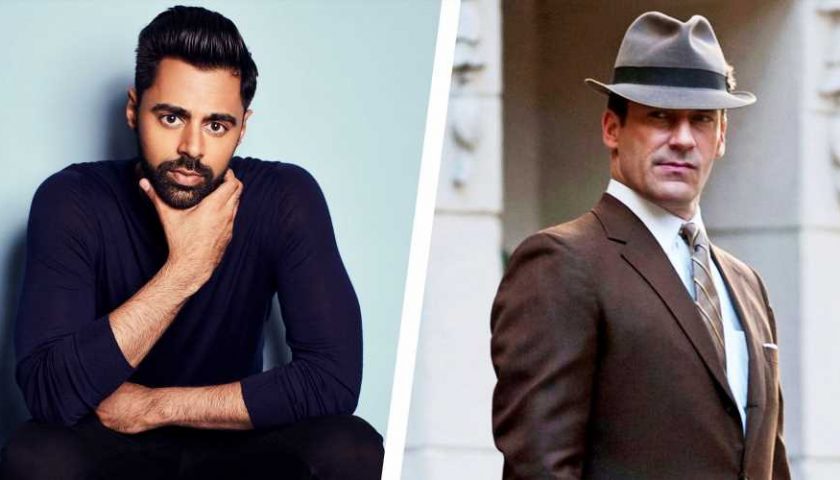 Hasan Minhaj is fired up. Since his show, Patriot Act with Hasan Minhaj debuted on Netflix in October of 2018, The Daily Show alum has brought an almost inextinguishable sense of energy to tearing through such meaty topics as drug pricing, student loans, and fentanyl.

His delivery—a mix of rapid-fire comedy and poignant political commentary—always comes with a sense of urgency. Yet on an episode that Netflix released at midnight on November 10th, his message felt more like a reckoning.

“The U.S. has a mental health crisis, and it’s about time we talk about it,” the show notes read.

Before that episode, Men’s Health talked to Minhaj about the show, why mental health matters to men, why it matters to him, and what men can do to start improving how they feel about themselves right now.

Men’s Health (MH): How do you have so much energy?

Hasan Minhaj (HM): Coffee. I drink a lot of coffee. But beyond the caffeine, I am genuinely excited to jump up on the stage and flail and talk about the things that I’ve been working on with our team of writers every week. But, yeah, I usually drink about three cups of coffee a day.

MH: Nine percent of men experience depression on a daily basis. More than 3 million men struggle with anxiety daily. What is it with men that they don’t want to seek help for mental illness?

HM: It’s interesting. We’ve been told to follow the Don Draper model: Carry our emotions deep down inside, which also often turns to substance abuse. I even felt as a dude growing up watching sports—watching guys dunk and score touchdowns—you don’t think about the mental aspects of your life. You think about the physical.

I think that, ultimately, this is a positive thing. The first barrier, as guys, is getting past that point of “can I talk about this?” There are over 43 million Americans that suffer from mental health that never get help. From my personal experience, it’s about finding someone you can talk to who legally can’t snitch on you.

MH: Do you feel comfortable talking more about your personal journey with mental health?

In my community we don’t talk about mental health. As far as my family is concerned, we made it to America, so there’s no reason to be sad. I would tell my father that I was sad and he would tell me to drink some water and pray some more.

MH: And that totally worked right?

HM: No! But I tried! I tried! Generationally, the people I am related to who were, or are, dealing with a mental health issue don’t know how to handle it. They couch it. They bury it. They don’t talk about.

MH: Does your wife working in the healthcare field influence how you feel about healthcare?

HM: Absolutely. My wife now works in health management and previously she worked with homeless veterans in the VA. Her stories and her experiences helped shaped a lot of the conversations I have in the newsroom—both in terms of this mental health episode and the one we ran on the third wave of the opioid crisis. She was one of the first people who told me about the fentanyl story.

MH: Healthcare has become political. Do you think that’s a good thing or a bad thing?

HM: Our lives are political. If you are trying to access mental healthcare, there are a lot of barriers put into your line. One of things I wanted to focus on in the episode was the 2008 Mental Health Parity and Addiction Equity Act. We, as Americans, are supposed to have access to physical health care and mental health care. We have had this for over a decade.

When I was trying to get help myself, I was having trouble getting my insurance providers to cover my costs. I thought, “Oh, this is normal.” But it shouldn’t be. Insurance companies have ways to deny you coverage even though the we have the Mental Health Parity and Addiction Equity Act.

MH: How do we make this fun?

HM: Are you trying to launch an app? Because if you found a way to make this fun, you could sell an app and people would love it. I think our episode shows people that there are rights that you have. I’m about pointing people toward tangible solutions. Let’s move people one step closer to better mental health. Let’s remove one other barrier. One of the resources we mention on the show is parityregistry.org where you can get the help you need to get reimbursed for mental health coverage.

MH: What do you say to the guy who, knowing all this, is still reluctant to get help?

HM: I think that the conversation we can have as men is to believe that having a mental health issue is not a weakness. Everyone is dealing with something in various capacities. Watch Dennis Rodman’s 30 for 30. Listen to Mike Tyson. Who was badder than these guys? There was no one more dominant for me as Rodman growing up. Yet you watch his 30 for 30 and you realize that he was crying out for help for decades.

The first step is talking about it and then getting the treatment that you need. You can perform a lot better. When you talk about re-branding, seeking help from a professional is a life hack for your health and your brain.

Ironically enough—and you know what’s also crazy—when thinking about being athlete, when you were playing sports, didn’t your coaches always say “It’s all mental”?

Maybe coach was right, it really is all mental.