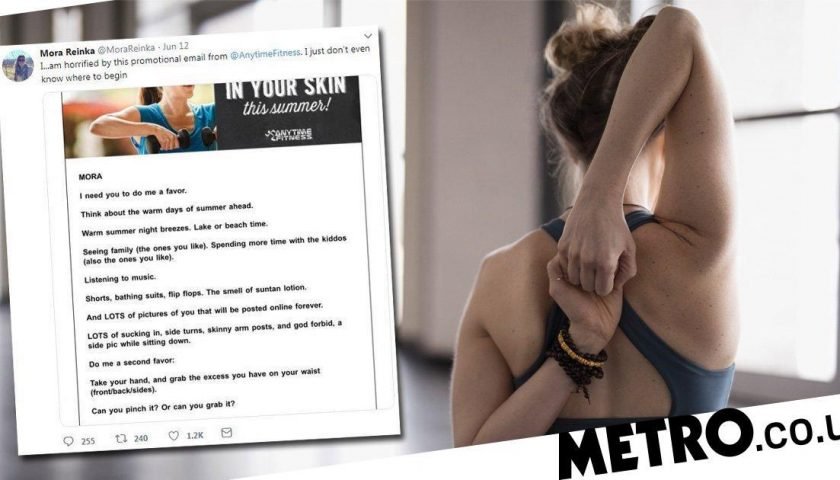 An American gym company has been slammed after a woman shared a promotional email that asked members if they were able to grab fat from certain parts of their bodies.

A franchise of Anytime Fitness, who’s headquarters is in Minnesota, sent out what appears to be a mass email to its members – with the aim to encourage them to get fit for summer.

But one recipient took to Twitter to share her outrage after reading the questionable wording of the message.

‘I need you to do me a favour,’ reads the email.

‘Think about the warm days of summer ahead.

About half way through, the email takes an unpleasant turn.

‘And LOTS of pictures of you that will be posted online forever.

‘LOTS of sucking in, side turns, skinny arm posts, and god forbid, a side pic while sitting down.

‘Do me a second favour:

‘Take your hand, and grab the excess you have on your waist (front/back/sides).

‘Can you pinch it? Or can you grab it?

Mora, who is a former Anytime Fitness member, tweeted that she was ‘horrified’ by the email, adding, ‘I just don’t even know where to begin.

Her tweet has been liked more then 1,000 times and hundreds have commented, with some calling the email ‘vile’.

‘The ad industry is often vile, but this is one of the more appalling and shameless ones I’ve seen,’ commented Lauren.

‘To cultivate [and] profit off of body shame, which too many of us are already made to feel.’

Loads of people also pointed out that the tagline in the email, ‘be comfortable in your skin this summer’, was completely incongruous with the rest of the message.

‘Holy Christ!!! It’s like they’re actively trying to have as detrimental effect as possible?! The irony of their tagline would be funny if it wasn’t so s***,’ said Kim.

‘Just what we need.. more body shaming. Good effort society, you’ve managed to alienate half of the population,’ added Becky.

It soon came to light that the email was sent from a specific franchise of the gym company – so not every member would have received it.

A representative from Anytime Fitness saw Mora’s tweet and responded directly: ‘This is not a message we support or encourage.

‘In fact, this language is the exact opposite of how we coach our franchisees to communicate.

‘We pride ourselves on being supportive and encouraging – never shaming. We are actively addressing this matter [and] we are deeply sorry.’

Mora then shared a screen shot of an official apology sent by the company’s media director, Mark Daly, who said that the email had been an ‘attempt at humor’.

‘Mora – I just spoke with the franchisee owner of the gym and expressed our disappointment,’ wrote Mark.

‘He apologized for his ill-advised attempt at humor and promised not to send similar messages to others. We will be re-training him to be supportive and encouraging.

‘On behalf of everyone at Anytime Fitness, please accept our apologies.’

It’s great news that action was taken, but being body-shamed by your own gym is never, ever cool.