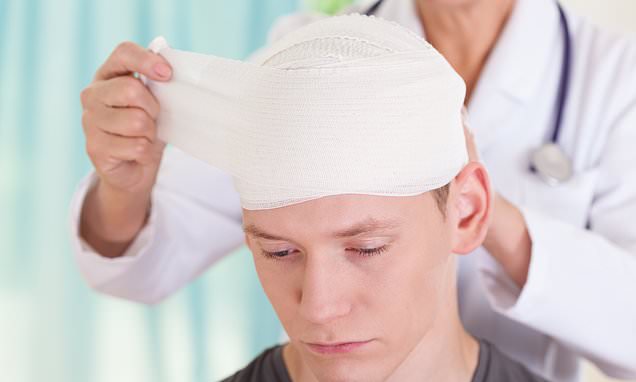 Giving mice the gas after they suffered blows to the head improved their survival rates, cognitive function and memories.

Xenon, which is already used as an anaesthetic, is thought to reduce the stimulation of neurotransmitters which peaks after a traumatic brain injury (TBI).

This can then damage nerve cells, which is known as a secondary injury and often occurs within minutes of the initial blow to the head. 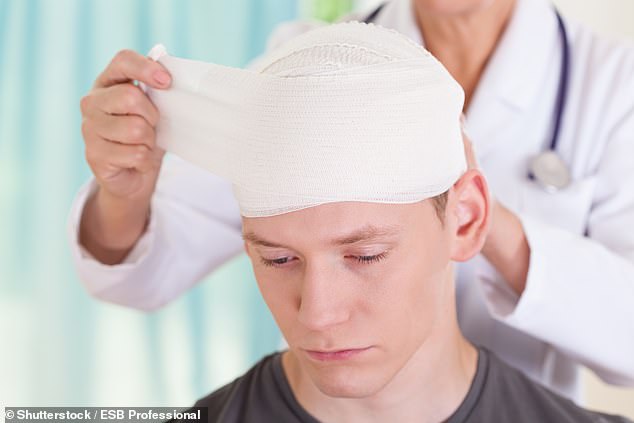 The research was carried out by Imperial College London and led by Dr Rita Campos-Pires, from the department of surgery and cancer.

Dr Campos-Pires said the findings add to evidence that suggests xenon could be used after head injuries to prevent secondary injuries developing.

She said: ‘Xenon appears to act in a variety of ways.

‘But one of the most likely mechanisms to explain its protective effects on brain tissue is by inhibiting receptors in the brain known as NMDA receptors, that become over-activated following a brain injury.’

TBI can occur from incidents such as falls or car accidents, and affect around 326 people in every 100,000 in Europe.

Those who survive often suffer from debilitating conditions that affect their ability to work or socialise.

The injuries also raise their risk of cognitive decline, Alzheimer’s and even an early death, studies have shown.

No drugs are proven to protect against brain damage following a TBI, with care currently focusing on rehabilitation.

Xenon is proven to be safe, and can be inhaled or administered via mechanical ventilation to numb patients in intensive care.

It has also been shown to prevent brain injury when blood supply is cut off to the vital organ. However, little is know about its effectiveness outside of the laboratory.

To put this to the test, the researchers analysed 72 adult mice, aged two-and-a-half months.

Some were inflicted with a TBI before receiving xenon or no treatment, while others were given the gas but no injury.

A day later, all the animals’ cognitive functions were assessed via a 15-point score that looked at their movement, balance and general behaviour.

WHAT IS A TRAUMATIC BRAIN INJURY?

A traumatic brain injury (TBI) typically occurs following a violent jolt to the head, such as during a car accident.

Objects penetrating the brain tissue, such as a bullet, can have the same effect.

TBI is the most common cause of death and disability in people aged one-to-40 in the UK.

Some 1.4million people attend A&E every year in England and Wales after suffering a blow to the head.

And in the US, an average of 155 people died every day of  2014 from injuries that included TBI.

In mild cases, brain cells may just be temporarily affected.

But in more serious incidents, the brain can be bruised, have torn tissues or bleed. This can lead to life-long consequences or even death.

In severe cases, patients may have seizures, dilated pupils, clear fluids draining from their nose or ears, or an inability to wake up.

Patients can go into a coma, a vegetative state or even brain death.

Mild causes are usually not treated aside from rest and over-the-counter painkillers.

In severe cases, anti-seizure drugs may be required.

Medication may also be given to reduce pressure inside the brain.

Some patients may be put into an induced coma to reduce the amount of oxygen the brain needs to function.

Patients may then undergo rehabilitation to relearn basic skills, like walking.

Their memories were then investigated nearly two years on, by which time the mice were approaching the average age of death for a healthy rodent.

Their brains were also dissected after they died, the researchers wrote in the British Journal of Anaesthesia.

This is thought to be due to the drug’s effect on different genes, as well as the process that causes excessive stimulation of the neurotransmitter glutamate.

Glutamate levels typically peak between 24 and 72 hours after a TBI.

The reduction in secondary injuries then led to a 67 per cent improvement in the mice’s cognitive test performances.

And the xenon-treated animals showed no signs of memory impairment.

When the researchers analysed the mice’s brain tissue, they found a 67 per cent reduction in white matter in those who had not received xenon.

White matter is involved in problem solving and focus, as well as mood and balance.

The xenon-treated animals also had less cell loss to the area of the brain known as the hippocampus, which regulates learning and memory.

And they had a larger contralateral corpus callosum. This is a thick nerve tract that consists of bundles that connect the brain’s two hemispheres.

Xenon also reduced the animal’s risk of death during the experiment, with them having the same life expectancy as the healthy controls.

None of those given Xenon died at six months or a year after their injury, compared to 20 per cent who were not given the gas.

At 20 months, 60 per cent of the untreated animals had died, compared to 45 per cent who were given xenon.

The researchers believe their study supports xenon’s effectiveness when given soon after a TBI.

The anaesthetic could therefore be administered within 20 minutes at the scene of an injury by first responders, they add.

Study author Dr Robert Dickinson added: ‘We have looked at very long-term outcomes, up to 20 months after TBI in mice.

‘This is very rarely done in animal studies and is equivalent to following up human TBI patients until their 80s.

‘The finding that only a short treatment with xenon can have beneficial effects on cognition, survival, and brain damage almost two years later suggests that xenon might prevent cognitive decline and improve survival in human TBI patients.’