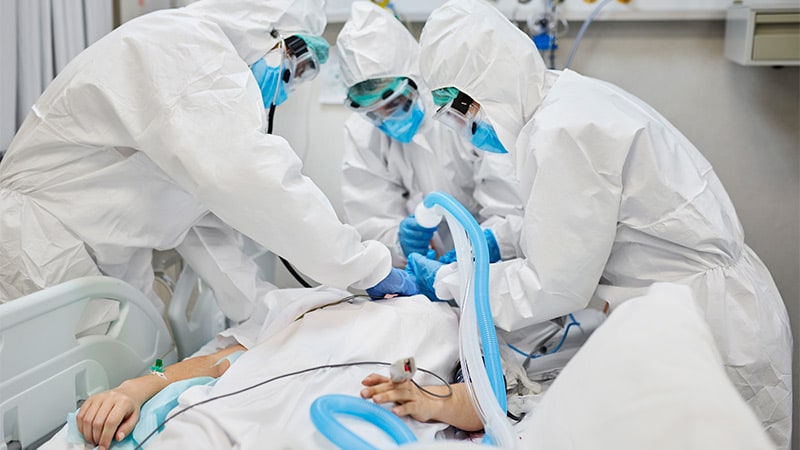 The first consensus guideline aimed at reducing the incidence of unrecognized esophageal intubation by recommending consideration of technical and human factors that contribute to the problem has been issued in an effort to lower rates of preventable mortality and serious morbidity.

Published in the journal Anaesthesia and produced by the Project for Universal Management of Airways and international airway societies, the guideline addresses the need to avoid cases of unrecognized esophageal intubation (as distinguished from tracheal intubation), which can result in profound hypoxemia, brain injury, and death.

Other international guidelines provide advice on techniques to confirm tracheal intubation, but the current guideline is the first to focus specifically on preventing unrecognized esophageal intubation. They authors emphasize that the trigger for tube removal should be identification of an unacceptable risk rather than a definitive diagnosis that the intubation was misplaced.

Tim Cook, MD, senior author, consultant in anesthesia and intensive care medicine, Royal United Hospital NHS Trust, Bath, and Royal College of Anaesthetists airway advisor in the UK, said that it was decided that existing guidance required a more structured approach “to try to make these tragic and avoidable events less common or even eliminated.”

The new guideline emphasizes that the consequences of unrecognized esophageal intubation — even for 3 or 4 minutes — are so significant that “it is a lower risk to remove the tube whenever there is suspicion than to delay removal until the suspicion is confirmed,” Cook said. Delay can be life-threatening or fatal.

“The consequences of removing the tube are usually minor, but we have seen, in many cases, reluctance to remove the tube,” he said. In several cases, he noted, the eventual removal of the tube was too late and brain damage had occurred. Brain damage often leads to death within a few days.

“We are emphasizing the importance of removing a suspicious tube immediately, as this is almost always less dangerous than delaying while trying to confirm it is in the wrong place,” he told Medscape Medical News.

Imran Ahmad, FRCA, clinical lead for airway management, Guy’s & St Thomas’ NHS Foundation Trust, London, UK, and president of the UK Difficult Airway Society, welcomed the guidance, saying it was relevant to all those involved in airway management and that it was written as a result of continued occurrence worldwide of unrecognized esophageal intubation.

“This consensus document gives clear and simple guidance on how to reduce, detect, and quickly manage esophageal intubation,” he said. “We hope that all airway practitioners implement these recommendations in their daily clinical practice and reduce preventable deaths and injury. We particularly welcome how technical skills, human factors, communication, and multidisciplinary team approaches are all addressed in these guidelines.”

According to the press release that accompanied the publication of the guidelines, “while a cardiac arrest is a frequent consequence of the lack of oxygen resulting from oesophageal intubation, when the breathing tube is correctly placed in the trachea, cardiac arrest due to other causes should still result in some carbon dioxide being able to be detected. The guidelines therefore re-emphasise earlier advice that cardiac arrests should not result in the complete absence of carbon dioxide unless the breathing tube is incorrectly placed.”

Cook stressed that exhaled carbon dioxide remains the first and most important factor in identifying correct placement of a tracheal tube and that traditional methods, such as “misting of the airway,” “auscultation,” and “chest rise,” are unreliable.

In unusual cases in which removal of the tube by default is regarded as placing the patient at risk, clear recommendations are provided on alternative ways to exclude esophageal intubation and to correct other causes of an absence of carbon dioxide.

Cook noted that carbon dioxide monitoring should be employed in every intubation and that everyone who is involved in care should be able to interpret such monitoring. “When the carbon dioxide trace is flat — ‘no trace: wrong place,’ it is relatively easy — esophageal intubation must be assumed or excluded before moving on.”

He went on to explain that cases are often more complex, and in a number of cases that resulted in tragedy, a carbon dioxide trace was observed, but it was abnormal or was not sustained.

“We therefore emphasise both that the carbon dioxide trace should be ‘good’ and meet four criteria, as described in the guidance,” he said. These criteria are an increase in amplitude during exhalation and a decrease during inspiration; consistent or increasing amplitude over at least seven breaths; peak amplitude >1 kPa (7.5 mm Hg) above baseline; and a clinically appropriate reading.

“When there is uncertainty about the correct positioning of the tube, and it is not being immediately removed, the options are to carefully check its position again,” advised Cook. This can be done with a videolaryngoscope, use of a flexible optical bronchoscope to look down the tube to confirm that the trachea can be seen, or use of an “oesophageal detector device.”

“We recommend two of these additional techniques are used before accepting the tube is in the right place,” he added.

The authors highlight the need for training regarding human factors (for example, understanding the problems and solutions involving rare events before they occur; individual fallibility; flattening hierarchies; and simulation training), as well as use of cognitive aids and decision tools to optimize individual and team performance in preventing unrecognized esophageal intubation.

“In cases of unrecognized esophageal intubation, it is typical that a clinical crisis develops quite rapidly. Clinicians may lose their ability to think clearly, see ‘the big picture,’ and act in a structured manner,” Cook pointed out. He noted that too many attending clinicians can compound the problem.

In Australasia, anesthetists are required to practice certain cases involving airway and other clinical crisis situations regularly to maintain registration, remarked Cook. “This is not a universal practice in other countries. There is a strong argument that it should be.”

Mike Nathanson, MBBS, president of the UK’s Association of Anaesthetists, welcomed the “important international initiative” and remarked, “Cases of unrecognized esophageal intubation still occur and may, sadly, lead to death or brain injury. Prevention of future incidents requires education, technological innovation, and a better understanding of the human factors involved.

“The suggestion of two-person confirmation of the presence of exhaled carbon dioxide is welcome, and we hope this can be introduced into clinical practice,” he said.

Cook’s department has received devices for evaluation or research, either free or at cost, from several manufacturers. Conflicts of interest of co-authors can be found in the original article . Ahmed has disclosed no relevant financial relationships.