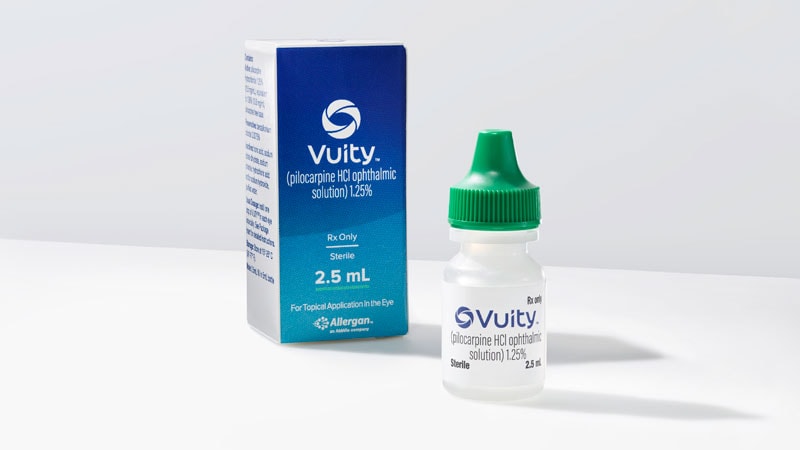 The US Food and Drug Administration for the first time has approved an eye drop to treat presbyopia, also known as age-related blurry near vision, in adults.

Pilocarpine HCl ophthalmic solution 1.25% (Vuity) works in part by contracting the pupil size in a pinhole-camera effect. It could allow people with good distance vision to forego their reading glasses in many situations, and might expand interest in refractive surgery such as LASIK.

“I am particularly encouraged by the rapid onset of action and duration of efficacy for Vuity to improve near and intermediate vision without impacting distance vision with one drop daily, particularly for those with mild to moderate presbyopia,” said George O. Waring IV, MD, medical director of the Waring Vision Institute in South Carolina, in a press release. Waring was principal investigator of the Gemini 1 and Gemini 2 phase 3 trials of the drug.

The drops must be administered daily, require at least 15 minutes to take effect, and last up to 6 hours.

Ophthalmologists have long known that miotics can improve near vision by contracting the iris sphincter, which reduces the pupil size and creates the pinhole-camera effect. Some drugs, including pilocarpine, may also increase accommodation through mild contraction of the ciliary muscle.

But, combined with preservatives, these eyedrops often cause side effects, including headaches, brow aches, and loss of mesopic vision. Pilocarpine, most commonly used to treat glaucoma, has largely been superseded by other glaucoma medications, partly because of these side effects. AbbVie credits its “proprietary pHast technology” for allowing pilocarpine to adjust to the pH of the tear film.

For the two phase 3 trials, the investigators recruited a total of 750 people with presbyopia and randomly assigned them to receive either pilocarpine or the vehicle as a placebo.

The patients took the drops in both eyes once a day for 30 days. The researchers tested the participants at day 30, hour 3 to see how many had gained three ETDRS lines or more in mesopic, high-contrast, binocular distance-corrected near visual acuity, a standard of success set by the FDA.

In both trials, more people in the pilocarpine group than in the placebo group met this standard, and the difference was statistically significant, the researchers say. In GEMINI 2, those who took pilocarpine met this standard without loss of greater than five letters in corrected distance visual acuity with the same refraction.

No serious adverse events were associated with the use of pilocarpine. More than 3% of those who took the drug suffered headache, conjunctival hyperemia, blurred vision, or eye pain.

Multiple other companies are working on drops that would work by a similar effect, including at least one compounding pharmacy whose product might be sold without needing FDA approval. Some, like AbbVie’s pilocarpine, may be administered in both eyes, whereas others are administered in only one eye to preserve vision in dim light.

Laird Harrison writes about science, health, and culture. His work has appeared in national magazines, in newspapers, on public radio, and on websites. He is at work on a novel about alternate realities in physics. Harrison teaches writing at the Writers Grotto. Visit him at lairdharrison.com or follow him on Twitter @LairdH