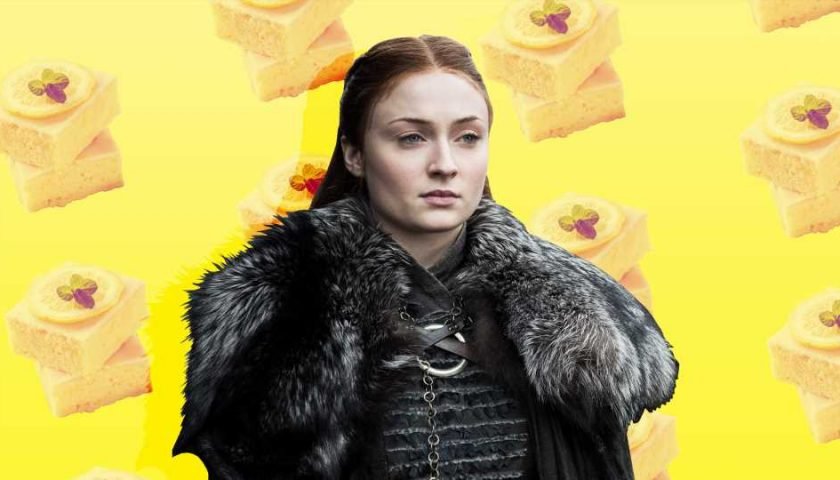 It’s just an empowering feeling when you find a fictional female hero who inspires you. Whether they’re from a popular TV show, a movie or a book you couldn’t put down, these fierce fictional characters bring you to life in a sense. So, it’s only natural to imagine what must make them tick. And since we love food so much, our natural inclination is to look to what our favorite imaginary ladies are using for fuel.

Granted, there are tons of amazing fictional female characters out there — and not all of them reference the things they like to eat. If you see some seriously kickass women missing from the list, just know that’s probably why. For the purpose of this article, we’ve homed in on characters who are associated with a specific food.

So, prepare to be both inspired and hungry in equal measure! Here are recipes inspired by 12 of our favorite female fictional heroes. 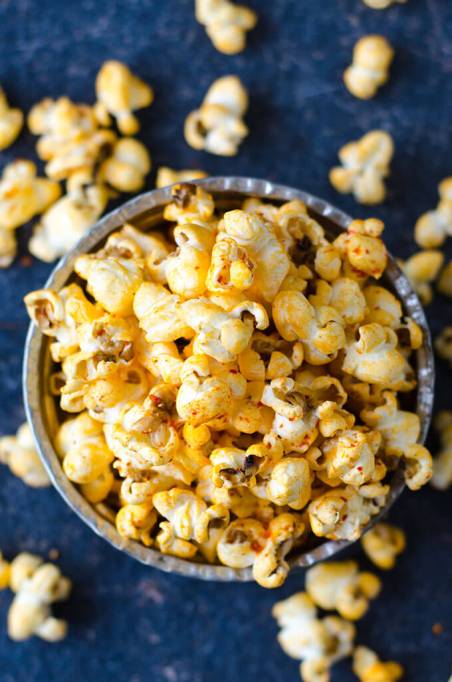 Where are all the Gladiators? When it comes to badass women on TV, few fiercer have come along than Scandal’s Olivia Pope. Sure, she’s morally questionable, at best — but there’s no denying she’s a total badass who rewrites salacious narratives and derails the nefarious plans of foreign dignitaries. For all her strengths, though, diet is not one of them. Olivia doesn’t eat the most well-balanced variety of foods.

We bypassed her standbys of bourbon and fictional Gettysburgers in favor of Olivia’s nightly treat: popcorn (and lots of it). Give Recipe’s salty, spicy version couldn’t be more perfect for Ms. Pope — because she is, in fact, both salty and spicy herself. 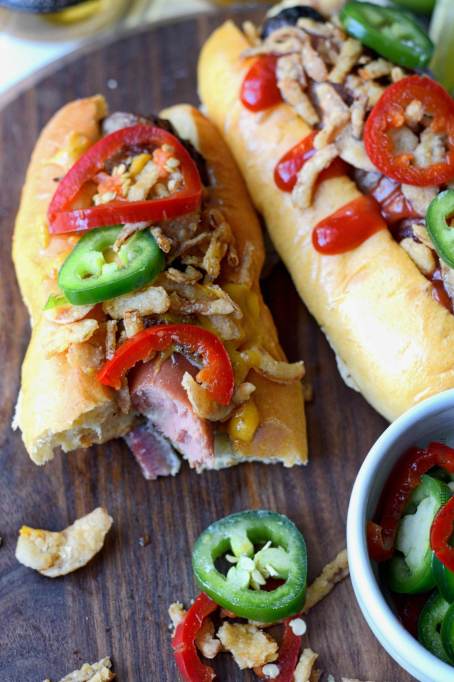 Liz Lemon, the hilarious fictional comedy sketch-show writer from 30 Rock, loves food. But she especially loves comfort food, and three of her favorites are hot dogs, cheese and pizza. So, it’s little wonder she created the infamous “Cheesy Blaster” — hot dogs, stuffed with Jack cheese and folded into a pizza.

We’re not quite nervy enough to make a regular habit out of that combo. But Butter Your Biscuit’s bacon-wrapped, cheese-stuffed hot dogs with crispy onions and jalapenos is like a gourmet version of Liz’s cheesy blaster creation. Thanks, Meat Cat! 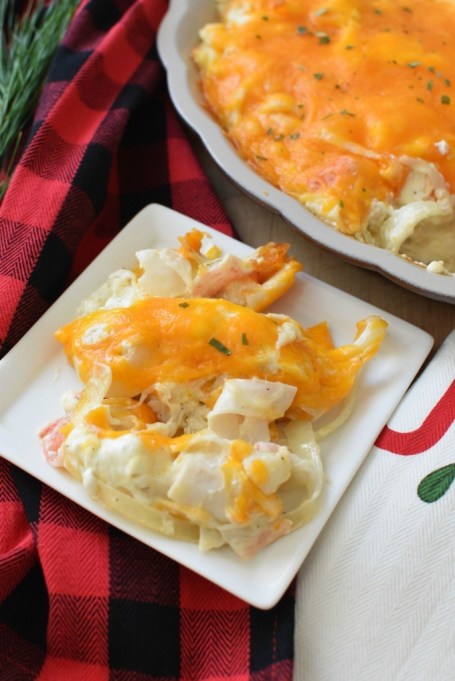 There’s no doubt that Clarissa Vaughn — the heroine of Michael Cunningham’s The Hours — is just as complex as the layered tale from which she comes. We know she has a beautiful capacity for emotion and finding joy, and we know that, in part, due to one particular dish. When her dear friend Richard (who affectionately refers to her as Mrs. Dalloway, like the Virginia Woolf character) grows increasingly ill from AIDS, Clarissa seeks to comfort him. “And there is, in its earthenware dish, the crab casserole Clarissa made herself, for Richard, because it was his favorite,” reads a line from the book in which the main character throws her dying friend a party.

So, in honor of Clarissa’s complexity and warmth, why not try Sizzling Eats’ comforting crab casserole. With sweet onion, imitation crab meat and tons of flavor, it’ll be just the pick-me-up you need after re-reading The Hours. 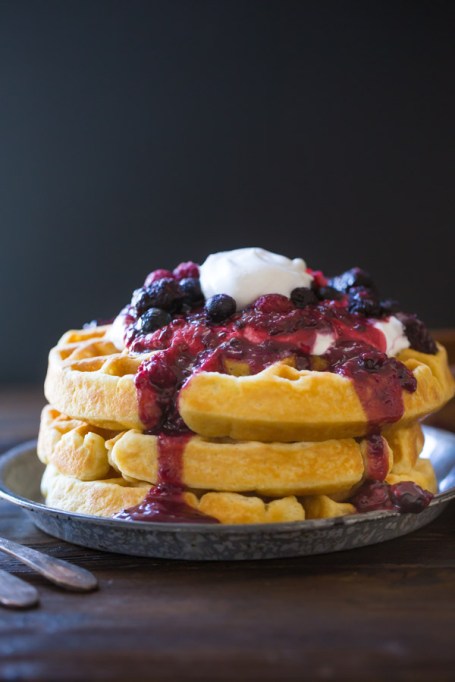 Parks & Recreation’s Leslie Knope obviously has her priorities straight. “We have to remember what’s important in life: friends, waffles, and work. Or waffles, friends, work. But work has to come third.”

Because waffles are life,  we recommend a stack of Lovely Little Kitchen’s best ever buttermilk waffles. Eat ‘em for breakfast, lunch and dinner — they’re that good. Plus, you’d make our girl Leslie proud. 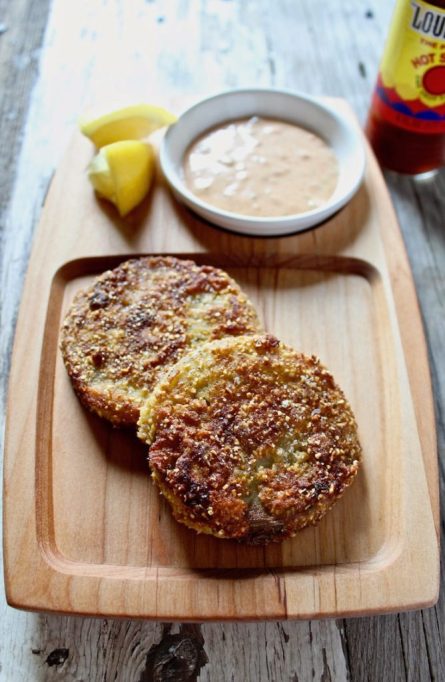 You can’t very well have a list of fictional female heroes and leave out Idgy Threadgoode, can you? The tough-as-nails, rough-around-the-edges character from Fried Green Tomatoes is a truly sass-pirational personality.

And while she may not have been the best at making fried green tomatoes at the Whistlestop Café (that was Ruth’s strength), she was good at eating them. If you’re feeling adventurous like Idgy, we recommend drizzling this recipe from The Hungry Bluebird with a tiny bit of her favorite topping: fresh honey. 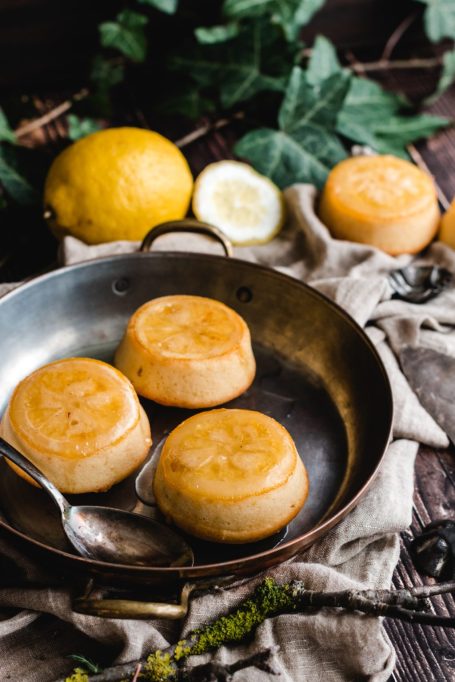 Unless you’re living in an alternate universe, you’ve likely caught a bit of the Game of Thrones fever. (Don’t worry; it’s contagious, but everyone else has it too so you aren’t a health hazard.) Although there are many — many, many, man — ladies of the seven kingdoms who kick ass and take names, we’re partial to Sansa Stark. And you know what Sansa Stark is partial to? As she revealed to Alerie and Olenna in one scene, “Lemon cakes are my favorite.”

Unfortunately, George R.R. Martin didn’t exactly include a recipe card in his novels. But Madame Dessert is here to save the day with what we can only imagine is a pretty accurate interpretation of Sansa’s beloved lemon dessert.

Chocolate Donuts Made With Sweet Potato 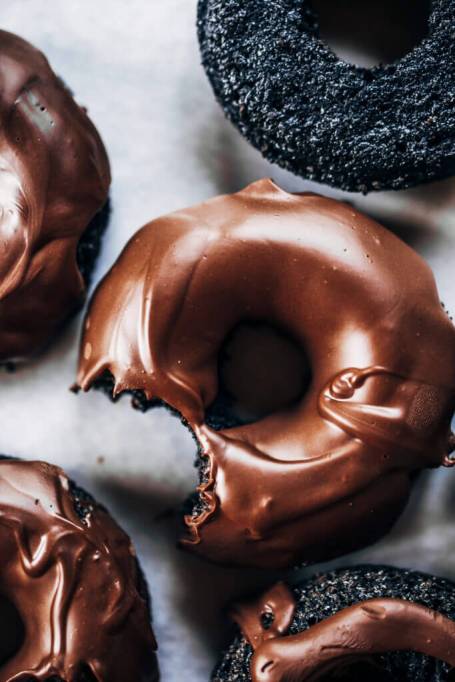 If for some inexplicable reason you haven’t been watching Grace and Frankie, dear god get on that. The series about unlikely best friends Frankie (Lily Tomlin) and Grace (Jane Fonda) is wickedly clever. It’s also filled with food, thanks to free-spirited Frankie’s relentless appetite. 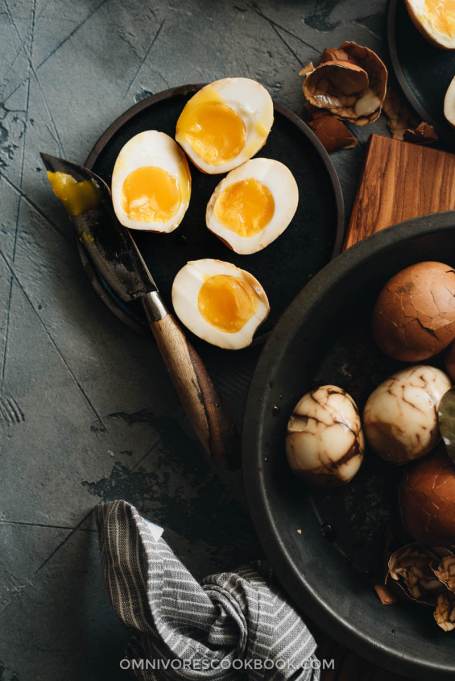 One of the most memorable female characters in recent movie history is The Shape of Water’s Elisa Esposito (played by Sally Hawkins). In the beginning, she is meek. Due to scars on her neck, she can’t speak. But in meeting “the asset,” she finds her figurative voice and risks everything to do the right thing.

One of the most endearing parts of the movie is watching her earn the Creature’s trust by bringing him boiled eggs every day. Channel your own inner Elisa by making a batch of this version by Omnivore’s Cookbook. Soft-boiled and marbled from simmering in savory tea, they’re endlessly interesting — just like our heroine. 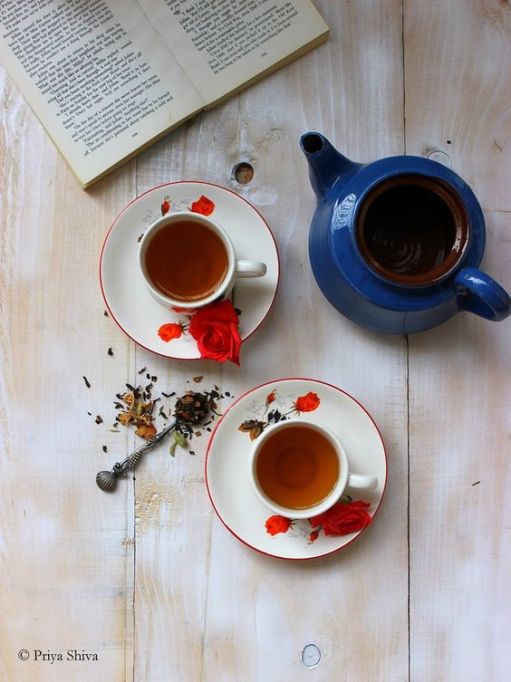 Don’t you just love Henrietta Lange on NCIS: Los Angeles? To anyone who has ever implied that women (a) over a certain age or (b) under a certain height are somehow less than, please take all the seats. Hetty, the operations manager for the Office of Special Projects, is here to educate you. The rest of us will sit back and watch, because everything this firecracker does is fascinating. Conveniently, we’ll be “sipping our tea” both literally and figuratively — it’s Hetty’s favorite beverage!

She loves it so much, in fact, that she would only greenlight a mission to Afghanistan if the team promised to bring her back a bag of tea leaves. So, Hetty, this one’s for you. Made with dried roses, green cardamom, cinnamon, cloves and saffron, Priya Kitchenette’s Kahwah green tea is a beverage traditionally served in the Middle East. 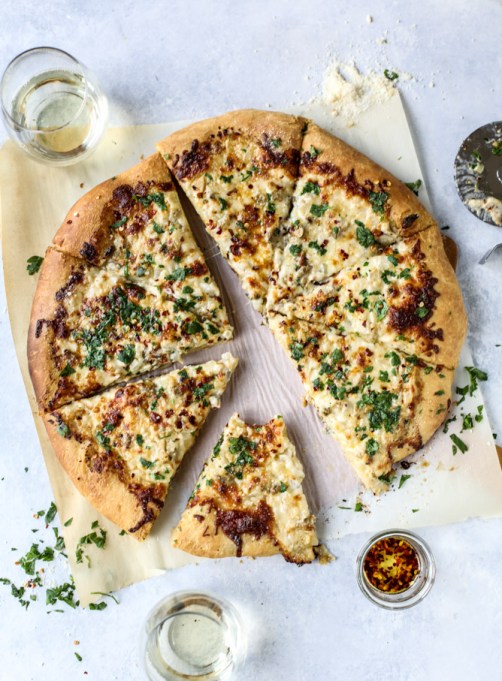 Food isn’t just food to Lorelai and Rory Gilmore — it is everything. The charismatic mother-daughter duo doesn’t just eat to live, they live to eat. And one of their all-time, hands-down favorite meals has to be pizza.

Because the Gilmore girls hail from Connecticut, we thought it would be fun to swerve slightly from their typical pepperoni in favor of an iconic style in their state: white clam sauce pizza. How Sweet Eats has the recipe, which includes a kick from chili oil that is to-die-for. You probably won’t see Luke serving this at the diner anytime soon. 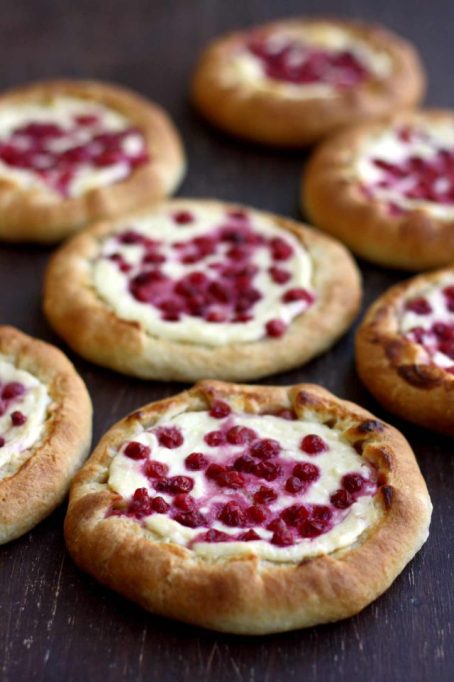 With Orange Is the New Black’s final season dropping sometime in the summer of 2019, there’s no time like the present to celebrate Litchfield’s favorite foodie: Galina Reznikov, aka “Red.” The queen of the kitchen, Red takes great pride in serving up food as palatable as possible to her fellow inmates (the ones who aren’t on her bad side, anyway).

But outside, in her life pre-prison, Red served up authentic Russian delicacies at her family’s food market in Queens. Her absolute favorite? Vatrushka, an open-faced pie with fruit. Happy Kitchen will walk you through preparing the sweet cheese buns with berries. But if you want to be more like red, you could always bake them with a peach puree during the summer months. 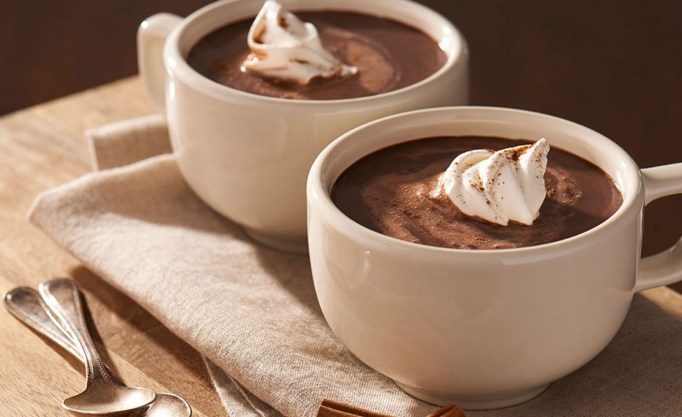 It’s been almost 20 years since Chocolat hit theaters, and we’re still dreaming about the creamy, dreamy spiced hot chocolate Juliette Binoche’s character Vianne serves to Judi Dench’s Armande. A single mother always on the move, Vianne had a certain magic for making people feel better. Perhaps the next time you’re having a down day, Hungry Forever’s hot chocolate recipe will do the same for you. Inspired by Vianne’s, it gets a kick from red chili peppers.