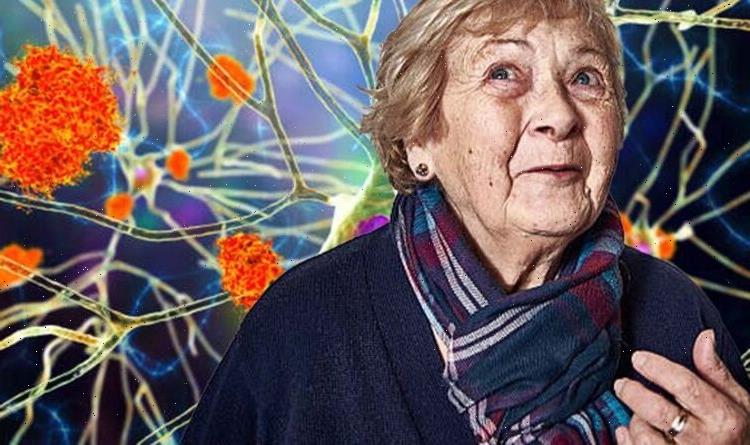 The health body notes: “These symptoms are often mild and may get worse only very gradually. It’s often termed ‘mild cognitive impairment’ (MCI) as the symptoms are not severe enough to be diagnosed as dementia.” Other early signs include memory loss, difficulty concentrating, finding it hard to carry out familiar daily tasks, such as getting confused over the correct change when shopping, being confused about time and place, and mood changes.

The NHS says: “You might not notice these symptoms if you have them, and family and friends may not notice or take them seriously for some time.

“In some people, these symptoms will remain the same and not worsen. But some people with MCI will go on to develop dementia.”

The National Institute on Ageing says symptoms of dementia can vary and may include:

The NHS notes that if you’re becoming increasingly forgetful, particularly if you’re over the age of 65, it’s a good idea to talk to a GP about the early signs of dementia.
Early diagnosis means its progression can be slowed down in some cases, so it is important to spot the signs early.

There are many different types of dementia, with Alzheimer’s disease being one of the most common.

The NHS suggests that risk factors such as hearing loss, untreated depression, loneliness or social isolation, or sitting for most of the day, may also be important.

Although there are some risk factors you can’t change, there are many that you can. This will not mean that you definitely do not develop the condition, but can make it less likely.

The Alzheimer’s Society notes that mid-life – from your 40s into your early 60s – is a good time to start taking steps to reduce your risk of developing dementia, though it is helpful to take steps at any age.

“The brain changes that cause dementia can start years or even decades before symptoms develop. If you live a healthy lifestyle now, you are reducing the chances that these brain changes will happen,” it adds.

The NHS Health Check can help find early signs and tell you if you’re at higher risk of certain health problems that can also increase your risk of dementia.

It is a free check-up of your overall health for people aged 40 to 74 who do not have heart disease, diabetes or kidney disease, and have not had a stroke, and is offered every five years.

There are five more common types of dementia and these are Alzheimer’s disease, vascular dementia, dementia with Lewy bodies, frontotemporal dementia and mixed dementia.

The number of people with dementia is increasing, perhaps because people are living longer.

By 2025, Dementia UK reports more than one million people will be living with dementia in the UK.

The NHS says: “See a GP if you think you have early symptoms of dementia, especially if you’re over 65 years of age.

“If you’re worried about someone else, encourage them to make an appointment with a GP and perhaps suggest that you go with them.”