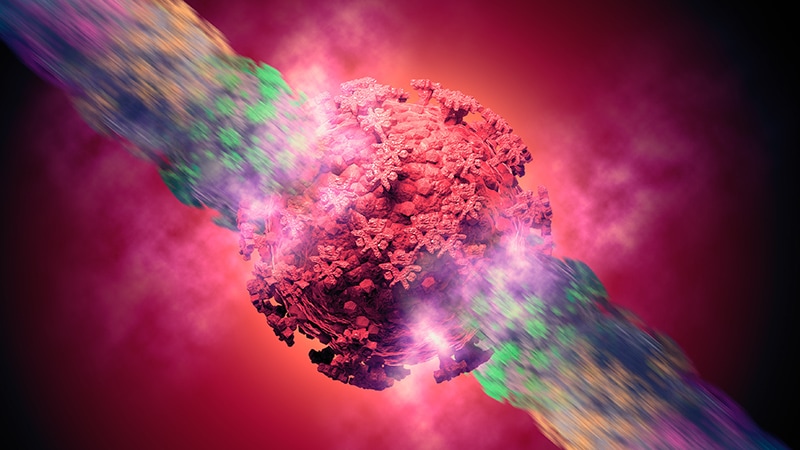 The nation’s top health officials said Tuesday that the Delta variant of the coronavirus is racing through the country and now is responsible for 83% of all U.S. cases.

That’s a massive increase from a week ago, when Delta was seen as responsible for just more than half of new cases, CDC Director Rochelle Walensky, MD, told a Senate committee.

Meanwhile, several states in the South are reporting a large increase in COVID-19 cases, particularly in areas with low vaccination rates, according to The Atlanta Journal-Constitution .

Arkansas, Florida, and Missouri are reporting full-fledged outbreaks, and neighboring states such as Alabama, Georgia, Louisiana, Mississippi, Tennessee, and Texas are following behind.

Dobbs posted a graph of hospitalizations in Mississippi, which showed numbers climbing dramatically in July after hitting a low in May and June.

Mississippi reported more than 2,300 new COVID-19 cases over the weekend, which is the state’s largest 3-day increase in cases since February, according to The Associated Press. Mississippi has one of the lowest COVID-19 vaccination rates in the country.

Florida has become one of the country’s biggest COVID-19 hot spots, now accounting for a fifth of new infections in the U.S., according to NBC News.

In Jacksonville, UF Health broke its record for hospitalized COVID-19 patients, jumping from 86 patients on Sunday to 126 on Monday.

“We’re gaining cases at such a rapid rate, we don’t really know where it’s going to stop,” Chad Neilsen, the director of infection prevention at UF Health, told NBC News.

“We aren’t even thinking a couple of months,” he said. “We’re thinking what’s going to immediately happen in the next week.”

Hospitals in Arkansas and Missouri are also preparing for a surge of patients that could strain staff and resources again, according to NBC News. If hospitalizations triple in the next 2 weeks, as projected by the University of Arkansas for Medical Sciences (UAMS), it could feel like the chaotic period at the end of 2020.

“We’re putting patients in physical locations where we weren’t putting them normally because of that demand,” he said.

At Houston Methodist Hospital in Texas, COIVD-19 hospitalizations have increased by 70% during the last week, according to the Houston Chronicle . On Monday, the hospital had 184 COVID-19 patients, which is double the number it had on July 1.

The Delta variant accounts for about 85% of the cases, and the hospital recorded its first hospitalization with the Lambda variant, the Chronicle reported. The Lambda variant, which was first identified in Peru, has been spreading throughout South America and is now reaching the U.S.

The Delta variant has been “running rampant” among unvaccinated people in Texas, Marc Boom, MD, the CEO of Houston Methodist, wrote in an email to hospital staff. The variant will account for nearly all COVID-19 cases in the area within the coming weeks, he said.

“It is the variant of concern in Houston,” he said. “What we’re seeing now is that Delta is far more infectious.”

Public health officials are grappling with the best way to move forward as cases and hospitalizations continue to rise. Increasing vaccinations is key, but mandating or guilting people into getting a shot would likely backfire, NBC News reported.

“People have heard our messages ad nauseam, but to see patients struggling to breathe and wishing they got vaccinated, that may make a difference,” Mette told the news outlet.

“Those are real people who are getting real sick,” he said.

“Southern surge: Hospitals brace for wave of Covid cases not seen in months.”