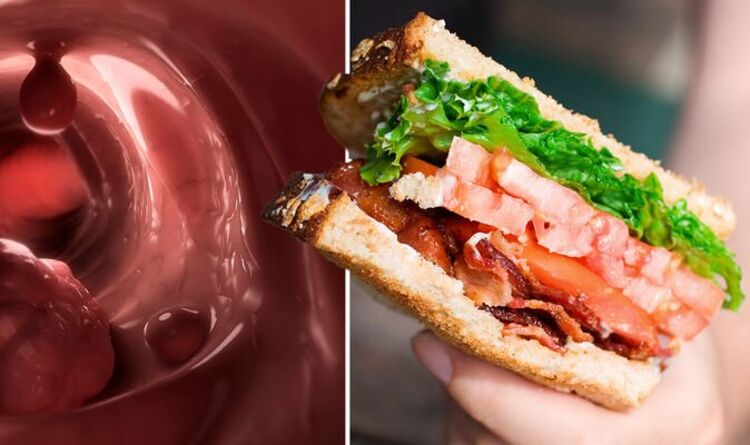 The growth of cancer can be attributed to many causes and teasing apart causation and correlation is a tall order. However, in 2015, the International Agency for Research on Cancer (IARC) – a group of experts that review and report on research evidence – classified processed meat as a “definite cause” of cancer (or Group 1 carcinogen) – the same group that includes smoking and alcohol. In 2019, Cancer Research UK scientists took a closer look at how much meat might be enough to increase bowel cancer risk.

“Processed” meat is meat that’s not sold fresh, but instead has been cured, salted, smoked, or otherwise preserved in some way (obvious examples include bacon, sausages, hot dogs, ham, salami, and pepperoni). But this doesn’t include fresh burgers or mince.

How much bacon puts me at risk?

A study, published in the International Journal of Epidemiology, looked at whether people who eat an average of 76 grams of processed and red meat a day – approximately three slices of ham – are still at increased risk of bowel cancer.

This is similar to the average amount people in the UK eat each day, and falls in a somewhat grey area within Government guidelines – which state anyone who eats more than 90 grams a day should cut this to no more than 70 grams a day.

The latest study analysed data from half a million UK adults over almost seven years and found that moderate processed and red meat eaters – those eating 79 grams per day on average – had a 32 percent increased risk of bowel cancer compared to people eating less than 11 grams of red and processed meat daily.

The main takeaway from the study was that even moderate meat-eating increases bowel cancer risk.

To put this in context, for every 10,000 people in the study who ate less than 11 grams of red and processed meat a day, 45 were diagnosed with bowel cancer.

These figures were just for the independent effect of meat consumption, as they took into account other differences between these groups of people, for example sex, deprivation, smoking, physical activity, alcohol intake, other aspects of diet, reproductive factors, and body mass index.

Professor Tim Key, who co-led the recent study and is deputy director at the University of Oxford’s cancer epidemiology unit, said at the time that while the impact of cutting back on processed meat might be smaller than quitting smoking, it’s still important.

“Everyone eats and everyone is at risk of colorectal cancer,” he said. “So any increase in risk makes a difference when we look at the whole population.”

And he saw the results as a reminder for those following government guidelines.

“Current government guidelines suggest if you eat more than 90 grams a day on average you should cut down to 70 grams a day. Our results suggest cutting down a bit more gives slightly lower risk, and are a reminder that there is still an increase in risk for modest intakes of meat.”

What if I eat my bacon on wholemeal bread?

Having a diet high in fibre, especially wholegrains, found in foods like wholemeal bread or brown rice, and doing lots of physical activity can be associated with a lower risk of bowel cancer – so could this mitigate cell damage from eating processed and red meat?

Cancer Research UK says: “Both fibre and lots of physical activity help us to poo more often, reducing the amount of time harmful chemicals, including those in processed and red meat, spend in the gut.

“But so far it’s not clear how much difference this could make to the amount of damage in our cells.”

“Studies take into account other things that might impact risk, so good studies that show the link between processed and red meat and bowel cancer will note fibre intake and many other factors which can be associated with both cancer risk and meat intake.”

The symptoms of bowel cancer can be subtle and do not necessarily make you feel ill. However, it’s worth trying simple treatments for a short time to see if they get better.

More than 90 percent of people with bowel cancer have one of the following combinations of symptoms: