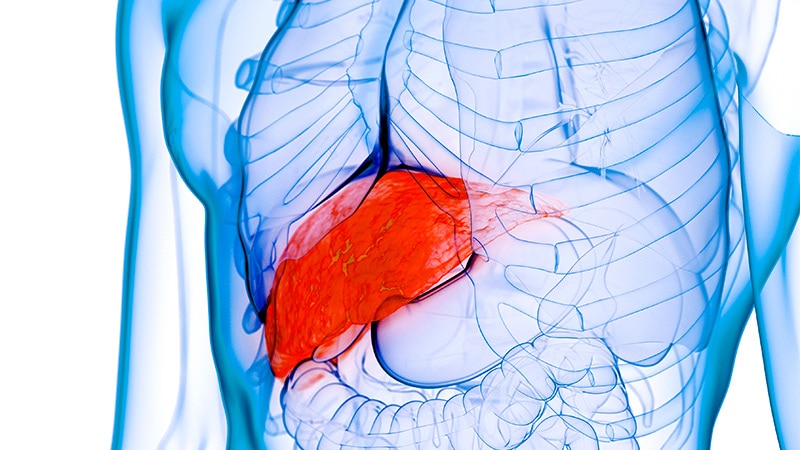 Past decompensation in alcohol-associated hepatitis may be linked with worse survival following liver transplantation, but it’s not all bad news, according to a retrospective study.

Traditionally, patients with alcoholic liver disease were asked to be alcohol free for 6 months before consideration for a liver transplantation. In recent years, there’s been a loosening of that policy, with physicians considering “early” liver transplantation (early LT) instead of waiting 6 months. “It became obvious that a lot of patients do resume alcohol use after transplant, and most of them don’t appear to suffer too much in the way of adverse consequences,” said Paul Martin, MD, chief of hepatology at the University of Miami, who was not involved in the current research.

In 2011, a study confirmed that suspicion, finding that 6-month survival was 77% among carefully selected patients with alcohol-associated hepatitis for whom the 6-month sobriety requirement was waived; 6-month survival in those who did not receive a transplant was 22%. The selection criteria included the presence of supportive family members, the absence of severe coexisting conditions, and a commitment to abstaining from alcohol.

However, authors of the current study, published in the American Journal of Gastroenterology sought nuance: The appropriateness of prior decompensation as exclusion criteria in published studies is unknown, so the researchers compared outcomes of patients with prior versus first-time liver decompensation in alcohol-associated hepatitis.

Not All Bad News

The study included 241 patients from six sites who consecutively received early LT between 2007 and 2020. Among these, 210 were identified as having a first-time liver decompensation event and 31 as having had a prior history of liver decompensation, defined as being diagnosed with ascites, hepatic encephalopathy, variceal bleeding, or jaundice.

However, the researchers noted that these patients, who had MELD scores of 39 and previous decompensation, were at exceptionally high risk of short-term mortality, but still had 1- and 3-year survival rates above 85% and 75%, respectively, with early LT. “While longer follow-up is desirable as graft failure related to alcohol is most apparent after 5-years post LT, these results suggest that prior decompensation alone should not be considered an absolute contraindication to early LT.”

Limitations of the study included its retrospective data and small sample size for patients with prior decompensation.

“These findings validate the value of the ‘first decompensation’ criteria in published experiences regarding early LT for [alcoholic hepatitis],” the investigators concluded. “Further larger and prospective studies with longer-term follow-up will be needed to assess ways to optimally select patients in this cohort who may benefit most from early LT, and ways to manage patients at highest risk for worse outcomes post LT.”

A Note of Caution for Early LT

About half of all liver mortality is attributable to alcoholic-associated liver disease. Corticosteroids can improve short-term survival, but there are no medications proven to increase long-term survival. That leaves liver transplant as the sole alternative for patients who don’t respond to corticosteroids.

“Programs in North America have liberalized their acceptance criteria for patients with alcoholic liver disease, and that’s resulted in large numbers of patients being transplanted who have less than 6 months abstinence. And overall, the results seem good, but I think this paper strikes an appropriate note of caution. In essence, if a patient had at least one prior episode of liver failure related to alcoholic excess and had recovered from that, and continued to drink and got into trouble again, [and then] presented for consideration for liver transplantation, the fact that they resumed alcohol use after prior episodes of decompensation suggests that they may be less-than-ideal candidates [for liver transplantation],” said Martin.

He pointed out important caveats to the study, including its retrospective nature and its inclusion of a relatively small number of patients with a history of liver decompensation. But it reinforces what physicians generally know, which is that some patients with severe alcohol use disorder also have liver failure, and they tend to fare worse than others after a liver transplant.

Still, physicians also face a conundrum because there are increasing numbers of younger patients who won’t survive if they don’t get a liver transplant. “The challenge is picking out patients who are going to be good candidates from a purely medical point of view, but have a low likelihood of resuming alcohol use after transplantation [which could injure] the new liver,” said Martin. The new study has the potential to provide some additional guidance in patient selection.

The study authors disclosed no relevant conflicts of interest. Martin has no relevant financial disclosures.