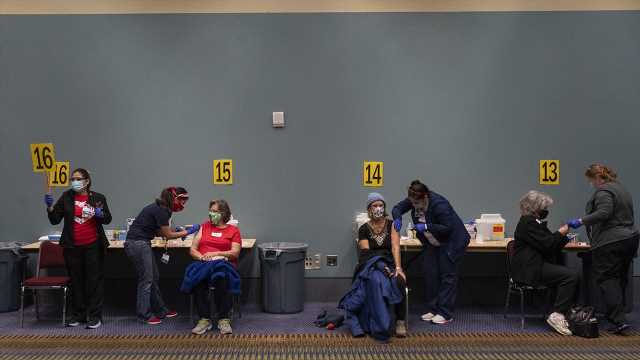 Monday marked President Biden’s deadline for states to make COVID-19 vaccine supply available for all U.S. adults. The deadline came as health authorities reported that over half of adults had received at least one dose of the jab thus far.

The Centers for Disease Control and Prevention (CDC) now reports that 50.4%, or 129.9 million, had received at least one dose of vaccine. For those ages 65 and older the percentage had climbed to over 81%.

The milestone comes as federal authorities have sought to reassure the public that there is ample supply to vaccinate eligible adults despite a pause in the Johnson & Johnson COVID-19 vaccine rollout. The Advisory Committee on Immunization Practices (ACIP) is scheduled to meet again to discuss safety and possible new guidance regarding the one-dose jab on Friday.

Dr. Anthony Fauci, the nation’s top infectious disease expert, and U.S. Surgeon General Dr. Vivek Murthy said the pause shouldn’t cause Americans to turn away from vaccines, and should instead serve as a sign that safety protocols are working. The ACIP had previously been tasked with meeting over concerns about clotting among six recipients of the 7 million Johnson & Johnson recipients just one day after the CDC and FDA recommended a pause.

Several committee members expressed concern that there wasn’t enough time to issue any kind of recommendation or guidance, and that more data was needed to make a decision.

Last week, Andy Slavitt, the White House senior advisor on COVID-19 response, said federal officials were working with states to reschedule Johnson & Johnson appointments with either Moderna or Pfizer shots. He emphasized that mobile units that have been deployed as part of vaccine outreach are equipped to travel and distribute all three products.

Initially, Biden had set the date for all adults to become eligible for May 1, but as the pace of vaccinations quickened and supply became more readily available, he moved the deadline up by several weeks to April 19. A majority of states had acted to open eligiblity ahead of the deadline. Biden also doubled his administration’s goal to administer 100 million shots within in his first 100 days, to 200 million. According to CDC data, the U.S. has already administered over 209 million doses ahead of the April 28 marker.