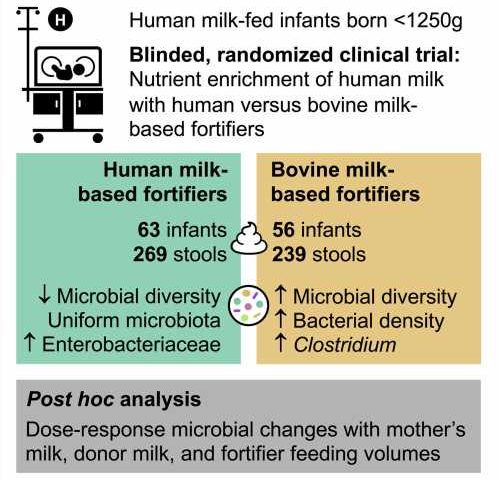 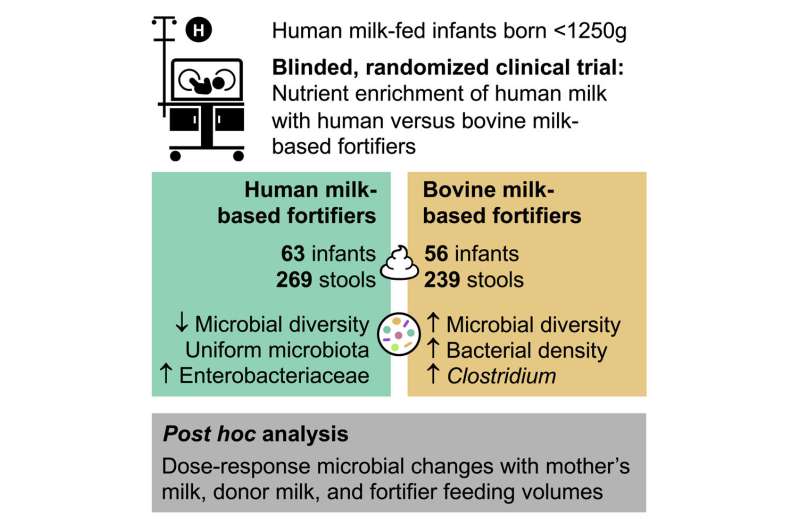 A team of researchers affiliated with a host of institutions in Canada has found differences in gut microbiota in prematurely delivered babies given human-derived milk fortifiers versus cow-derived milk fortifiers. In their paper published online in Cell Host & Microbe, the group describes the triple-blind randomized clinical trial they ran to learn more about the benefits of giving preemies milk fortifiers.

Over the past several decades, medical scientists and doctors have found that giving prematurely delivered babies milk fortifiers helps them gain weight and become healthier than when given milk alone. More recently, a debate has arisen regarding whether using milk fortifiers made using bovine-milk-based fortifiers (BMBFs) is better for preemies than human-milk–based fortifiers (HMBFs). In this new effort, the researchers conducted a clinical trial for the purpose of learning more about the impact on the gut biome of preemies fed one or the other milk fortifier.

The trial involved feeding some of the preemies in a hospital setting BMBFs and others HMBFs and then testing stool samples from the preemies to learn more about the impact of the two kinds of fortifiers on biome diversity. The researchers found that the babies receiving the HMBFs had on average a lower amount of microbial diversity. They also found differences in the structure of the microbial community and microbial function. They note that because the BMBFs were procured in powder form while the HMBFs were procured in liquid form there could have been some differences in microbial changes due to dose differences. They note also that it is still not known if differences in microbiome communities in preemies is related to their overall health.