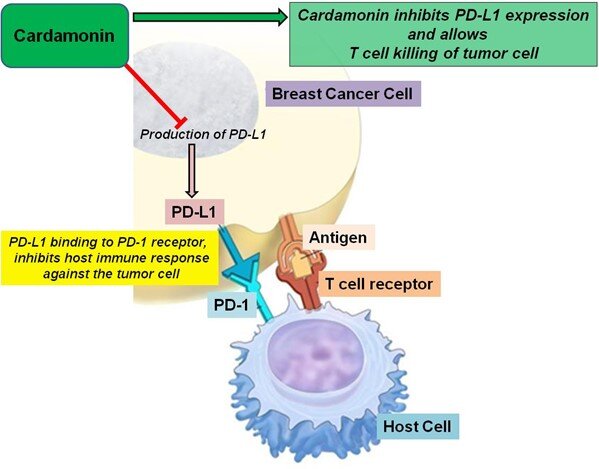 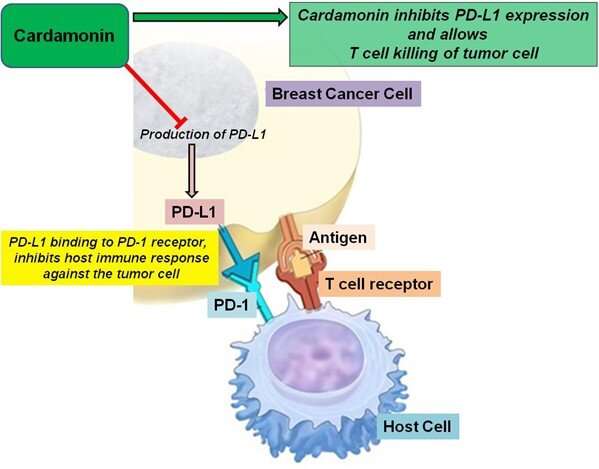 Cardamonin—a natural compound found in the spice cardamom and other plants—could have therapeutic potential for triple-negative breast cancer, according to a new study using human cancer cells. The findings also show that the compound targets a gene that helps cancer cells elude the immune system.

About 10-15% of breast cancers are triple-negative, which means they don’t have receptors for estrogen or progesterone and don’t make excess amounts of a protein called HER2. These tumors are difficult to treat because they don’t respond to the hormone-based therapies used for other types of breast cancer. They also tend to be more aggressive and have a higher mortality rate than other breast cancers.

“It has been challenging to develop a targeted therapy for triple-negative breast cancer that is safe and effective at the same time,” said Patricia Mendonca, Ph.D., assistant professor and research analyst at Florida A&M University in Tallahassee. “Because of this, there is a critical need to investigate medicinal plants as a new way to combat this cancer.”

Mendonca will present the new research at the American Society for Investigative Pathology annual meeting during the Experimental Biology (EB) 2022 meeting, to be held April 2–5 in Philadelphia.

“The fact that cardamonin has been used for centuries as a spice and, more recently, as a supplement shows that its intake is safe and may bring health benefits,” said Mendonca. “Our research shows that cardamonin holds potential for improving cancer therapy without as many side effects as other chemotherapeutic agents.”

For the new study, the researchers investigated how cardamonin affected the expression of the programmed cell death ligand 1 (PD-L1) gene, which is found in tumor cells. PD-L1 is overexpressed during breast cancer progression and plays a critical role in helping breast cancer cells evade the body’s immune system.

The researchers used two genetically different triple-negative breast cancer cell lines—one derived from women with African American ancestry and the other from women of European origin (Caucasian). They found that cardamonin treatment caused a dose-dependent decrease in cell viability in both cell lines. It also reduced PD-L1 expression in the Caucasian cell line but not the African American cell line, indicating that cells from different races may respond differently to cardamonin because of genetic variations among races.

“This is the first study to describe cardamonin’s inhibitory effect on the expression of PD-L1, which is relevant for the treatment of triple-negative breast cancer,” said Mendonca. “These findings add support to other research that has shown differences in the tumor microenvironment between African and non-African Americans.”