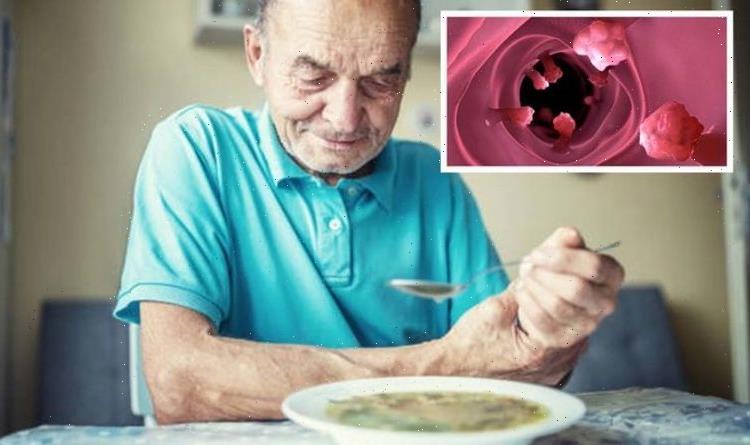 Bowel cancer is also called colorectal cancer. It affects the large bowel, which is made up of the colon and rectum, and is the fourth most common cancer in the UK. The number of people dying of bowel cancer has been falling since the 1970s, so early diagnosis and getting treatment is key. There are a number of lifestyle factors that may increase your risk, such as eating too much red and processed meat or too little fibre.

It is very important to get cancer spotted early, as this can help immensely.

Sadly, survival rates drop as the disease develops, so the charity says “early diagnosis really does save lives”.

Dr Angela Rai, GP at The London General Practice, said that abdominal pain, discomfort or bloating brought on by eating – sometimes resulting in a reduction in the amount of food eaten and weight – is a sign of bowel cancer.

The GP says bleeding from the back passage and blood in your stool are both signs.

Symptoms also include a persistent and unexplained change in bowel habit, and the feeling of needing to pass stool, even after opening your bowels.

You may also notice unexplained weight loss, extreme tiredness for no obvious reason, or pain or lump in your abdomen.

Nonetheless, Dr Rai noted: “Most people with these symptoms actually do not have bowel cancer, but if you are concerned, please speak to your GP.”

Risk factors include being over the age of 50, having a strong family history of bowel cancer, or having a longstanding inflammatory bowel disease such as Crohn’s disease or ulcerative colitis.

Dr Rai said: “Screening is a way of testing healthy people to see if they show early signs of cancer, when there is a good chance of successful treatment.

“Screening can also find non-cancerous growths (polyps) in the bowel that may develop into cancer in the future. Removing these polyps can reduce your risk of getting bowel cancer.”

Bowel Cancer UK notes that over 42,000 people are diagnosed with bowel cancer every year in the UK.

It says that one in 15 men and one in 18 women will be diagnosed with bowel cancer during their lifetime.

The exact cause of bowel cancer is not known, but there are a number of things that can increase your risk.

The NHS says that smoking may increase your chances of getting bowel cancer, and that bowel cancer is more common in overweight or obese people.

To detect cases of bowel cancer, everyone aged 60 to 74 who is registered with a GP and lives in England should automatically be sent a bowel cancer screening home test kit every two years.

Each of the bowel cancer screening programmes in the UK use home tests called the Faecal Immunochemical Test, which looks for blood in poo.

Surgery is usually the main treatment for bowel cancer, and may be combined with chemotherapy or radiotherapy, according to the NHS.

It adds: “When deciding what treatment is best for you, your care team will consider the type and size of the cancer, your general health, whether the cancer has spread to other parts of your body, and how aggressive the cancer is.”