You’ve made it through nearly three years of a global pandemic with almost all of your marbles.

There’s just one tiny problem. You can’t seem to shake the weighty feeling that your mind has been contorted by what you’ve survived. When you think about the new year, you wince and feel like you’re looking out at the world through a grimy lens with nothing but Sisyphean tasks stretched out on the road ahead. 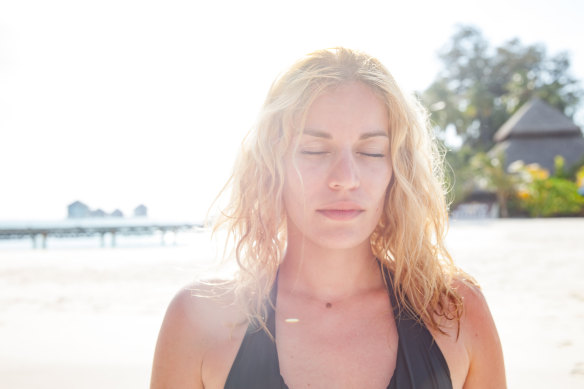 “Humans need an integrative narrative, for [their] story to come together in a way… to come to terms with what has been an incredibly disruptive and chronically stressful period,” says Professor Ian Hickie.Credit:iStock

Is there a way to think about the last few years that can help you move forward with a lightness of spirit?

There is. The first step is to create a cohesive narrative that reflects what you’ve actually experienced, says Professor Ian Hickie, a co-director at The University of Sydney’s Brain and Mind Centre.

”Because we’re stuck with these conflicting ideas: good, bad,” says Hickie about the way in which many think about the changes they’ve experienced over the last few years, whether that’s to do with work, home life, family or friends. “Humans need an integrative narrative, for [their] story to come together in a way. To both learn. But also, emotionally, to come to terms with what has been an incredibly disruptive and chronically stressful period.“

Oscillating between thinking about your last few years as traumatic or challenging and joyous – “it was good, but bad, but good, but bad” – creates both physical and psychological stress, he says.

“We call that cognitive dissonance,” says Hickie, who co-authored Minding Your Mind, which examines the causes of burn-out and was published in October. “[And] it actually creates physiological stress. It puts up your cortisone,” he says referring to the so-called “stress hormone” that elevates our blood pressure and heart rate.

“When these [thoughts are] unreconciled, we don’t sit easy. We’re stuck between two alternatives. Humans are good when we’re doing things, and [this] creates a freeze response. ‘Should I go left, should I go right?’ Well for God ‘s sake just go one way.’”

So, how to create a cohesive narrative about what you’ve been through?

“You can’t deny the last three years, that would be stupid,” says Hickie. “[So ask yourself], ‘What out of the whole mess was genuinely bad? Really bad. What did I not do? What did I really miss as a consequence [of the pandemic]? What did I realise that I really missed? What did I actually really benefit from [as a result of the enforced changes]?’”

This helps us to come to terms with our experience and move forward in a positive way.

“It reconstructs [how we think of the past] to be, ‘Of course, on balance, we would never choose such a thing, but we’ve learned, and we have opportunities now,’” he says. “It creates an imagined future.”

Hickie has learned, for instance, that instead of having to retire once inflexible work becomes too onerous – the only previous alternative, pre-pandemic, to working in his role – now he can imagine a future that is more flexible. “Because, guess what, I’ve been doing that for three years. The world changed me.”

“Actually prioritise them [now],” he says of whatever small joys the pandemic made you newly appreciate, whether that was being able to spend more time with your family, or swapping niceties with your local barista.

Another key is to recognise that you need to carve out time to recover from the chronic stress of the last few years.

“You can only respond to a [metaphorical] sabre tooth tiger jumping at you physically for so long,” says Professor Lyndall Strazdins, a clinical psychologist at The Australian National University, referring to the fact that we’re all still coping with the physical threat of COVID and the various challenges it has added to our lives, with no pandemic end date in sight.

”What happens for people when they have a threat that’s quite chronic and keeps going, it starts to alter how the body can cope. No one species is biologically programmed for that.

“[But] our society has not given full respect to [the need for] recovery [from stress]. We’ve slipped into imagining kind of almost like a machine-like world where we just keep going, and it’s unsustainable.”

Just recognising this, says Strazdins, is validating and therefore cathartic. “We’ve been in a bit of a slow boil,” she says.”If you can’t say something or can’t articulate something, you’re effectively silenced … [So] it’s not going, ‘Oh what’s wrong with me that I feel this bad?’ That’s a downward spiral.’

“So, make sure you treat it seriously,” she says. “[Realise] ‘I need to recover. I’m feeling this way [burnt out] and it’s telling me something.’”

Recovering, slowly but surely, doesn’t require much time or money. It could be as simple as a daily cup of tea in the backyard with your partner and a little time to smell the night air. A walk with your pet. Anything that “puts the positives on your balance sheet” and gives you a sense of recovery, pleasure or joy, says Strazdins. ”It’s nearly always things that involve being with nature or with people you love.

“In the olden days we used to call that leisure,” says Strazdins. “It’s sort of a dirty word now. The role of leisure as a kind of fundamental right has really slipped away from our public thinking, yet mentally and physically it’s so important.”

Others might want to think about doing some “resetting”, to feel more “vitality”. Like, for instance, putting more boundaries around work, and what they are and are not prepared to do – and when, she says.

What about parents who are stressed out from worry about how negatively impacted their children have been by the last few years?

Quit molly-coddling them, says Dr Judith Locke, a Brisbane clinical psychologist and author of the bestselling book, The Bonsai Child.

“The thing that concerns me is that we are writing off a generation [of children and teenagers] as being significantly impaired in an ongoing manner, that they will never be able to catch up from having lived through COVID, sort of tricky times,” she says.

She sees many parents who, instead of empathising with their children and then pushing back at their reluctance to move on – to go back to school, pick a university course or get a job – end up capitulating and catering to their children’s protestations that they’re incapable of more.

“School refusal is huge right now,” says Locke. “Now, I think, again, it’s very easy to kind of explain it as being COVID … but then to sit and go, ‘There’s nothing you can do, let’s home school them’ … It’s kind of like, where is the chance of growth here? Of moving them beyond [the challenge]?

“We’re failing to see that research shows us that more than half of people have post-traumatic growth out of negative experiences,” she says, referring to people’s boosted resilience and sense of their capabilities after traumatic experiences like wars and natural disasters.

“We really have to look forward with optimism and get what we need to get everybody back on track.”

The trick, says Locke, is to teach a child resourcefulness by letting them face age-appropriate challenges, like not getting class captain or being chosen by their sport team, and then slowly allowing them to face more challenges over time so that they learn that they can cope.

Dr Danielle Einstein, a clinical psychologist in Sydney who has researched the impact of uncertainty on people, agrees.

“We have to look at how to move on, what are the systems that we’ve put into place to put less pressure on people [that is now holding them back],” she says, like adults who are now working remotely, and are resistant to returning to the workplace. “Actually, that’s stopped us from returning to normal and from seeing that we’re OK.

“It’s about empathy, but then moving them on.”

So, let your child, or partner, vent about whatever difficulty they’re having – but only three times, says Locke. Then you must move on to problem-solving.

“It’s still respectful,” she says. “It’s even more respectful to encourage somebody to improve themselves. It’s not caring to hold them back [by just empathising] … And we are ultimately too often putting our effort into holding them [our loved ones] in the space and making them feel understood, rather than making them feel understood and then gently moving them on.”

She likens it to what you think when a good friend is still talking about the ex they broke up with a year ago.

“There’s a point that good friends go, ‘Hey, you need to move on from this.’”