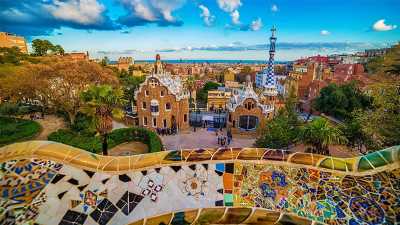 After 2 years of virtual gatherings, the annual European Society of Cardiology (ESC) Congress 2022 is back and celebrating its 70th birthday live in the raucously beautiful city of Barcelona, Spain.

Much of the upcoming event, scheduled for August 26 to 29, however, will also be broadcast online, and the full program will be available on-demand after the meeting.

“It enables a lot of people who, for some reason, cannot travel to still connect, and it also provides what we’ve done in the past, but I think in a more natural way of doing it,” he said. “You can connect later on again, read, digest, look at sessions that you may have missed, and that’s a nice experience to take advantage of.”

Thus far, early registrations are favoring the sunny climes, with about 14,000 onsite and 4,200 online attendees.

This year’s spotlight theme is cardiac imaging, with programming throughout the Congress devoted to its role in diagnosis, treatment, follow-up, and, increasingly, guidance of interventions.

“Particularly as it relates to the transcatheter heart valves, it’s really a new discipline, and I think you can’t overemphasize that enough because the interventional result directly depends on the quality of imaging,” Windecker said. “This will certainly logarithmically increase during the next few years.”

“Especially during the COVID pandemic, many investigators and trialists experienced difficulties in recruitment, difficulties in terms of also personnel shortages, and so on. So really, we feel very privileged at the large number of submissions,” he said. “I think there are really very interesting ones, which we tried to spread throughout the 4 days.”

Among the studies Windecker highlighted is TIME, which kicks off Hot Line 1 on Friday, August 26, and aimed to establish whether antihypertensive medications taken at night are truly more cardioprotective than those taken in the morning.

The topic has been hotly debated, with proponents pointing to a near halving of mortality and cardiovascular events with bedtime dosing in the Hygia Chronotherapy trial. Skeptics question the validity and conduct of the trial, however, prompting an investigation by the European Heart Journal, which found no evidence of misconduct, but has many looking for more definitive data.

Also in this session is SECURE, pitting a cardiovascular polypill that contains aspirin, ramipril, and atorvastatin against usual care in secondary prevention, and PERSPECTIVE, comparing the effects of sacubitril/valsartan with valsartan on cognitive function in patients with chronic heart failure and preserved ejection fraction (HFpEF).

“It addresses an understudied patient population, and the second element is that sometimes things you do out of ordinary application — so, the application of oxygen — may have beneficial but also adverse impact,” Windecker said. “So, to study this in a randomized clinical trial is really important.”

Additionally, he highlighted REVIVED, which will be presented in Hot Line 3 and is the first trial to examine percutaneous coronary intervention (PCI) with optimal medical therapy (OMT) vs OMT alone in the setting of severe ischemic cardiomyopathy.

“We have data from the STICH trial, where surgical revascularization was investigated in ischemic cardiomyopathy, but the open question is: What about PCI as revascularization?” Windecker said. “The other reason it’s interesting is that we have these evidence-based drugs that have dramatically improved outcomes in patients with heart failure, and REVIVED certainly has been conducted now in an era where at least some of these drugs are more systematically implemented.”

Rounding out this session are the Scottish ALL-HEART study of allopurinol in ischemic heart disease and EchoNet-RCT, looking at whether artificial intelligence (AI) can improve the accuracy of echocardiograms.

Hot Line 4 features DELIVER, a phase 3 trial of the SGLT2 inhibitor dapagliflozin (Farxiga) in HF with preserved or mildly reduced ejection fraction. Topline results, released in May, showed that the study has met its primary endpoint of cardiovascular death or worsening HF.

Windecker said DELIVER will be a “highlight” of the meeting, particularly because EMPEROR-Preserved, presented at ESC 2021, showed a benefit for another SGLT2 inhibitor, empagliflozin, in this very specific setting. Two prespecified analyses will also be presented, pooling data from EMPEROR-Preserved and from the DAPA-HF study of dapagliflozin in patients with reduced EF. “This will be a session very rich in terms of information.”

Another not-to-be-missed session is Hot Line 5, which will focus on antithrombotic therapy, according to Windecker, who will cochair the Sunday, August 28 session.

First up is the investigator-initiated INVICTUS-VKA, testing rivaroxaban noninferiority vs standard vitamin K antagonists in patients with atrial fibrillation (AF) and rheumatic heart disease, a setting in which non-vitamin K antagonists have not been sufficiently tested.

This is followed by three phase 2 trials — PACIFIC-AMI, PACIFIC-STROKE, and AXIOMATIC-SSP — investigating the novel factor XIa inhibitors BAY 2433334 and BMS-986177 in patients with myocardial infarction or stroke.

Sunday’s Hot Line 6 takes another look at smartphone-based AF screening in eBRAVE-HF, use of causal AI to improve the validity of cardiovascular risk prediction, and AI-enhanced detection of aortic stenosis.

Hot Line 7 rounds out the day, putting coronary imaging center stage. It includes perfusion scanning with MR or PET after a positive angiogram in DanNICAD-2, the PET tracer 18F-sodium fluoride as a marker of high-risk coronary plaques in patients with recent MIs in PREFFIR, and fractional flow reserve- vs angiography-guided PCI in acute MI with multivessel disease in FRAME-AMI.

After a weekend of top-notch science and, no doubt, a spot of revelry, the focus returns on Monday, August 29 to three Hot Line sessions. The first of these, Hot Line 8, updates five clinical trials, including 5-year outcomes from ISCHEMIA-CKD EXTEND, 15-month results from MASTER DAPT, and primary results from FOURIER-OLE, the open-label extension study of evolocumab out to 5 years in approximately 1600 study participants.

The session closes out with causes of mortality in the FIDELTY trial of finerenone and a win-ratio analysis of PARADISE-MI.

Also featured is evidence on radial vs femoral access for coronary procedures, and PANTHER, a patient-level meta-analysis of aspirin or P2Y12 inhibitor monotherapy as secondary prevention in patients with established coronary artery disease.

COVID-19, deeply rooted in the minds of attendees and considered in 52 separate sessions, takes over the final Hot Line session of the Congress. Hot Line 10 will report on antithrombotic therapy in critically ill patients in COVID-PACT and on anti-inflammatory therapy with colchicine and antithrombotic therapy with aspirin alone or in combination with rivaroxaban in the ACT inpatient and outpatient trials. Although such early trials have been largely negative, the latest details will be interesting to see, Windecker suggested.

In terms of COVID-19 protocols, ESC will recommend but not mandate masks, and will have test kits available should attendees wish to have a test or if they become symptomatic, he noted.

Four new ESC guidelines will be released during the Congress on cardio-oncology, ventricular arrhythmias and sudden cardiac death, pulmonary hypertension, and cardiovascular assessment and management of patients undergoing noncardiac surgery.

In addition to a guideline overview on Friday, one guideline will be featured each day in a 1-hour session, with additional time for discussions with guideline task force members, and six sessions devoted to the implementation of existing guidelines in clinical practice.

The ESC already has a position paper on cardio-oncology, but now, for the first time, has a full guideline with formal laws and level-of-evidence recommendations, Windecker pointed out.

“I think what will be the great asset, not only of the guideline but out of this emerging field, is that people in the future will probably not only be treated when it’s too late or suffer from toxicity, but that there will be screening and people will be aware before the implementation of therapy,” he added.