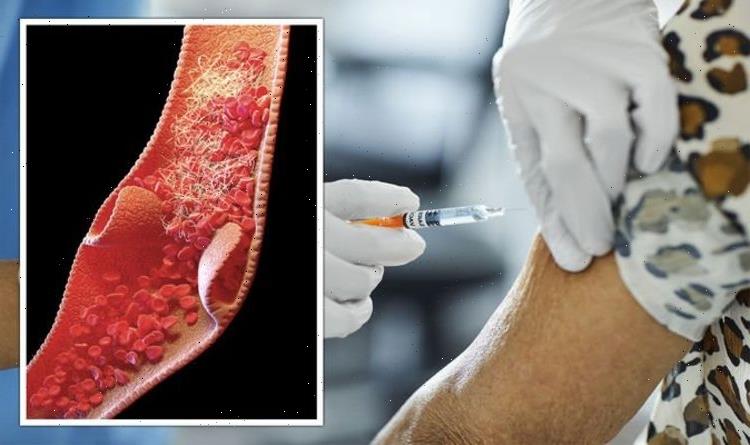 In May, the Joint Committee on Vaccination and Immunisation (JCVI) recommended people under the age of 40 be offered an alternative to the Oxford/AstraZeneca vaccines where possible, following reports of rare blood clots after first shots of the vaccine. Now, researchers have identified why such incidences may have occurred.

A team, led by Sue Pavord of Oxford University Hospital NHS Foundation Trust, were able to identify the markers associated with rare blood clots linked to the Oxford/AstraZeneca COVID-19 vaccine.

Thrombocytopenia, is a condition where the patient has a low count of blood cells that help the blood clot, known as platelets.

Thrombosis, on the other hand, occurs when blood clots block veins or arteries, and can lead to life-threatening conditions such as a stroke or heart-attack.

The team’s findings showed that the overall mortality rate of those presenting to hospitals with definite or probable vaccine-induced Thrombocytopenia or Thrombosis (VITT) was 23 percent.

READ MORE: AstraZeneca covid vaccine: The symptoms of coronavirus showing up in those jabbed

The odds of death, however, increased threefold among patients with platelet counts below 30,000 per cubic millimetre and bleeding in the brain following blood clots, also known as cerebral venous sinus thrombosis (CVST).

The team conducted the study by evaluating a total of 294 patients aged between 18 and 79.

Of the study subjects, 220 were classed as either definite or probable cases of VITT, and all patients had received the first dose of AstraZeneca vaccine, with symptoms appearing five to 48 days after the jab.

The team observed that 85 percent of the patients studied were under the age of 60, many of whom had no underlying conditions.

One of the study authors, Michael Makris, professor of haemostasis and thrombosis at University of Sheffield, said that despite the findings, the team remained “strong pro-vaccination advocates”.

He added: “I believe the whole world should be vaccinated against COVID-19. We are not here to say anything bad about AstraZeneca, it is a matter of targeting it.”

Doctor Pavord said: “Our study shows that for those who develop VITT, it can be devastating.

“It is particularly dangerous when the patient has a low platelet count and bleeding in the brain.”

The Medicines and Healthcare products Regulatory Agency (MHRA) received reports of 411 cases of major blood clots with concurrent low platelet counts in the UK following administration of the AstraZeneca vaccine up to July 28, 2021.

The fatality rate among these patients was 18 percent, with 73 deaths, six of which occurred after the second dose, according to the MHRA.

Doctor Pavord added: “VITT is a very new syndrome, and we are still working out what the most effective treatment is, but identifying prognostic markers has helped to determine what is the more effective way to manage the condition.”

“It’s very important to stress that this kind of reaction to the Oxford-AstraZeneca vaccine is very rare.

“In those aged under 50, incidence is around one in 50,000 people have received the vaccine.”

The team has not seen any further cases of VITT in the last three-to-four weeks, suggesting that the decision to offer an alternative vaccine has made a difference, added Doctor Pavord.