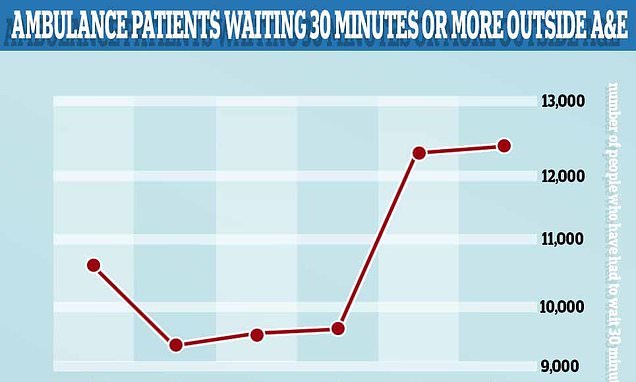 NHS crisis: 11 hospitals turned away AMBULANCES because they were too busy last week as 12,000 patients waited at least 30 minutes to be handed over by paramedics into A&E

The number of times hospitals turned ambulances away from their A&E departments soared last week to its highest level this winter.

Accident and emergency performance figures this week show the NHS is feeling the strain, as snow falls across Britain and temperatures plunge to -4C.

One in eight people taken to A&E in an ambulance were forced to wait at least half an hour before being handed over because hospitals were too busy.

And 19 out of 20 overnight hospital beds in the entire country are full – higher than the ‘safe operating level’ and the busiest they have been all winter.

Growing numbers of beds are being closed because of norovirus or diarrhoea and vomiting bugs, with beds closed more than 4,000 times in a week. 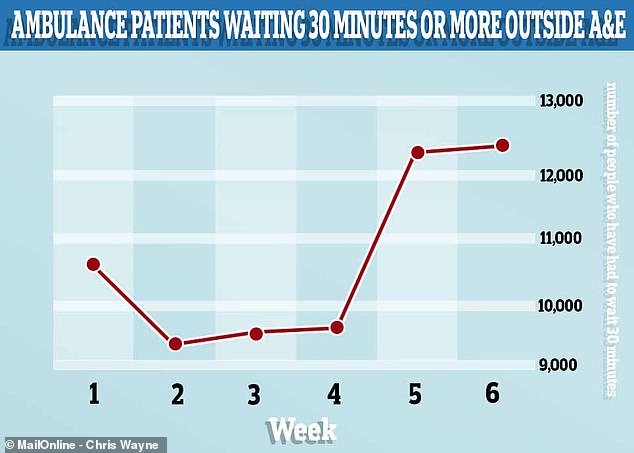 Weekly statistics for January 7 to January 13 show that, despite hospitals managing the crisis better than last year, they are still cracking under the pressures of winter.

Hospitals set up diverts to send ambulances away 38 times last week – up from 17 the week before and a 500 per cent increase from just six in the same week last year.

An NHS spokesperson said ambulance crews wait with their patients in a room off the A&E rather than in the back of an ambulance, but patients have been known to spend the time in an ambulance while waiting for space to become available.

The percentage of people waiting for half an hour or more is at its highest since figures began in early December – 12.5 per cent.

Waiting times rising as the total number of patients arriving by ambulances falls – last week was the lowest since December 16 – suggests hospitals are clogged up.

‘These figures show we’re right back to where we started after a brief lull over Christmas,’ said the Royal College of Nursing’s chief executive, Dame Donna Kinnair.

Higher numbers of people visit doctors and hospitals in the winter, making staff busier, but too few staff and funding gaps make it even more difficult for hospitals to run smoothly.

There were more than 100,000 empty job posts in September 2018 and analysts feared the situation would only get worse.

NHS trusts across England were also £814 million in deficit at the end of June, a shocking quarterly report also revealed.

Chris Hopson, chief executive of NHS Providers, said trusts – which run local services and spend money – ‘are doing all they can’.

Commenting on the figures, he added: ‘However hard they run, they don’t seem able to outpace the increase in demand.

‘Trusts tell us they are most worried about the workforce shortages they face, and it’s a real concern that these figures have shown such a big increase in vacancy levels.

‘It’s worrying this problem is getting worse rather than better.’

‘Hospitals are only just keeping their heads above water, and we have not yet faced a serious cold snap or outbreak of flu that could send the system into meltdown.

‘The public is right to wonder if the NHS has got through this winter on good fortune.

‘The only way to insulate the health service from seasonal demands is to address once and for all the chronic workforce crisis which leaves the NHS with almost 41,000 nursing vacancies.’

The Labour Party’s Shadow Health Secretary, Jonathan Ashworth added: ‘This is an NHS which remains under considerable strain this winter after years of Tory underfunding, chronic staff shortages and wider health and social care cuts.

‘While the Tory Government is left reeling and distracted from its Brexit shambles, patients are paying the price.’

The Royal College of Surgeons recommends 85 per cent of beds are kept available to maintain safe standards, whereas the NHS’s official target is 92 per cent.

But last week’s figure is nearing the highs of 95.2 per cent seen in last year’s crisis.

And just five hospital trusts last week managed to keep their occupancy level below the 85 per cent target.

One trust – Weston Area Health Trust, which runs the General Hospital in Weston-super-Mare – was 100 per cent full all week. 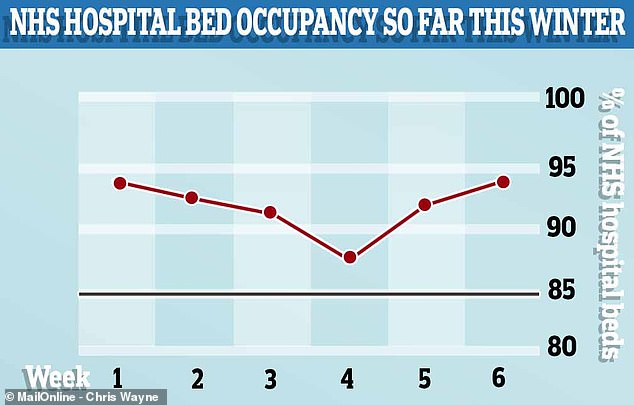 Inpatient cases of norovirus and vomiting bugs were last week at their highest so far this winter.

A total of 4,318 hospital beds were closed because of the highly contagious illnesses, with 915 of those beds empty and going to waste.

An NHS spokesperson said: ‘NHS staff continue to pull out all the stops with flu and norovirus cases continuing to rise as expected in January.

‘Thanks to closer working between hospitals, local health groups and councils, fewer people are spending long periods in hospital compared with this time last year.

‘With temperatures set to drop, it’s more important than ever that people help doctors, nurses, paramedics and other frontline staff provide care to the most seriously ill, by getting the free flu jab if you’re eligible, and by using the NHS 111 service as the first port of call for non-emergencies.’