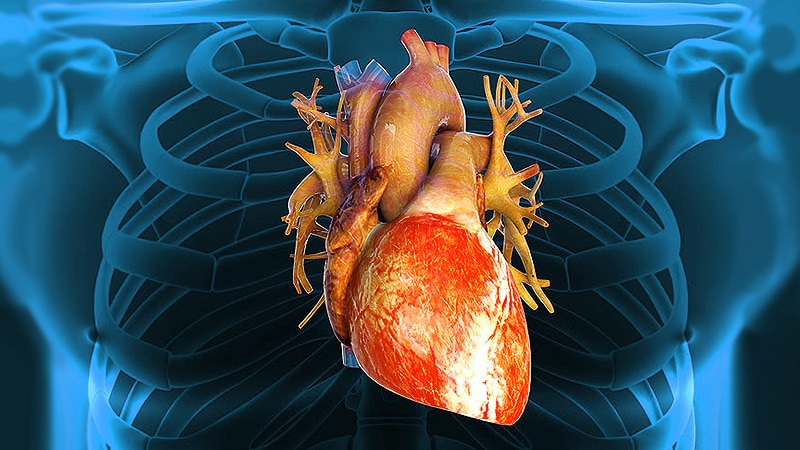 Treatment of these patients without gout with 600 mg of allopurinol daily had no effect on composite primary endpoint outcomes, including nonfatal myocardial infarction (MI), nonfatal stroke, or CV death.

“ALL-HEART is the first large, prospective, randomized trial of the effect of allopurinol on major cardiovascular outcomes in patients with ischemic heart disease and provides robust evidence on the role of allopurinol in these patients,” principal investigator Isla Shelagh Mackenzie, MBChB (Honors), PhD, University of Dundee, Scotland, concluded at a press conference here.

Their results suggest allopurinol should not be recommended for secondary prevention of events in this group, Mackenzie said. Although it remains an important treatment for gout, she added, “other avenues for treatment of ischemic heart disease should be explored in future.”

Results of the ALL-HEART (Allopurinol and Cardiovascular Outcomes in Ischemic Heart Disease) trial were presented August 27 at the European Society of Cardiology (ESC) Congress 2022.

Allopurinol is a xanthine oxidase inhibitor and acts by reducing serum uric acid levels and oxidative stress. Treatment is generally well tolerated, Mackenzie noted in her presentation, but some patients develop a rash, which can in some cases be serious or even fatal, progressing to Stevens-Johnson syndrome or toxic epidermal necrolysis, “particularly in certain ethnicities.” If rash develops, the advice is to stop treatment immediately.

“The importance of serum uric acid levels in cardiovascular disease is controversial, and there have been different reports over the years of how important they may be,” Mackenzie explained.

Observational studies have shown variable results, whereas intervention trials, most with fewer than 100 participants, have suggested potential improvements in factors such as blood pressure, endothelial function, left ventricular hypertrophy, or carotid intima-media thickness. Some have reported benefits in acute coronary syndrome and coronary artery bypass grafting, but others have not, she said. A previous study by their own group suggested an improvement in chest pain and exercise time in patients with chronic stable angina and documented coronary artery disease (CAD).

“So, until now, there have been no large prospective randomized trials of the effects of allopurinol on major cardiovascular outcomes in patients with ischemic heart disease,” Mackenzie said, and this was the aim of ALL-HEART.

ALL-HEART was a prospective, randomized, open-label, blinded-endpoint, multicenter trial. Patients with ischemia heart disease but no history of gout were recruited from 424 general practices across the United Kingdom, starting in February 2014 and with follow-up ending in September 2021. Participants were randomly assigned 1:1 to receive 600 mg of allopurinol daily or usual care.

“It was a decentralized trial, so the follow-up was largely remote after the first 6 weeks, and that included using record linkage data collected from centralized NHS [National Health Service] databases for hospitalizations and deaths in Scotland and England,” she said. The average follow-up was 4.8 years.

Mean serum uric acid levels dropped from 0.34 mmol/L at baseline to 0.18 mmol/L at 6 weeks of treatment, “so we can see that the treatment was effective at lowering uric acid,” she noted.

In total, there were 5721 patients in the final intention-to-treat analysis, and 639 patients had a first primary event.

For the primary outcome of nonfatal MI, nonfatal stroke, and cardiovascular death, there was no difference between the groups, the researchers reported, with a hazard ratio of 1.04. Similarly, in secondary analyses, there were no differences in any of the component endpoints making up the primary outcome, or in all-cause mortality, between the two groups, Mackenzie noted, “so a definitively neutral trial all round.”

Table. ALL-HEART: Primary and Component Endpoints for Allopurinol vs Placebo

There were also no significant effects on quality-of-life outcomes. Cost-effectiveness analyses are ongoing, although no differences are expected there, Mackenzie noted.

Invited discussant for the presentation, Leslie Cho, MD, Cleveland Clinic, Ohio, said that ALL-HEART, while an excellent trial with a pragmatic design, constitutes yet another negative antioxidant trial.

“Moreover, 57% of the patients stopped taking allopurinol, and rightfully so,” she said. Patients were receiving optimal medical therapies, many of which are also antioxidants, including statins, angiotensin-converting enzyme inhibitors, angiotensin receptor blockers, and β-blockers.

Second, the patient population was older, with an average age of 72 years. “This makes the ALL-HEART study a chronic angina study, chronic CAD study, one of the oldest modern day CAD trials. If you look at LoDoCo or ISCHEMIA trials, the average age is 63.” Patients also had established disease, many with previous revascularization.

“Currently, there is no reliable measurement of global level of oxidative stress,” Cho noted. “Moreover, dose response was not tested, and if we cannot test the baseline antioxidant stress level of patients, we also cannot measure the effect of treatment on the global oxidative stress.”

So, “is there no hope for antioxidant trials?” she asked. Three factors will be required for future success, she said. “Number one, selecting the right patient at the right time. Number two, a reliable biomarker to measure oxidative stress to guide who should get therapy, and if the therapy is working. And lastly, targeted therapies that work on major triggers of oxidative stress.”

Also commenting on the results, B. Hadley Wilson, MD, executive vice chair of the Sanger Heart & Vascular Institute/Atrium Health, clinical professor of medicine at University of North Carolina School of Medicine and vice president of the American College of Cardiology, called ALL-HEART “an important and interesting study.”

“For years, cardiologists and others have been interested in allopurinol as an anti-inflammatory, xanthine oxidase inhibitor … to prevent coronary ischemic events,” he told theheart.org | Medscape Cardiology.

But this was a well-designed, well-conducted study, and “unfortunately there was no improvement in the primary outcome, no reduction in major cardiovascular events like myocardial infarction or stroke or cardiovascular death,” Wilson said. “So, it’s a bit of a disappointment that it’s not there as an important medication to help us with these patients with ischemic heart disease, but it’s also an important question answered — that we need to look at treatments for ischemic heart disease other than allopurinol.”

The trial was supported by the National Institute for Health and Care Research (NIHR) Health Technology Assessment (HTA) Program in the United Kingdom. Mackenzie reports research contracts to her institution from NIHR HTA for this work, and other disclosures related to other work. Cho and Wilson report no relevant disclosures.