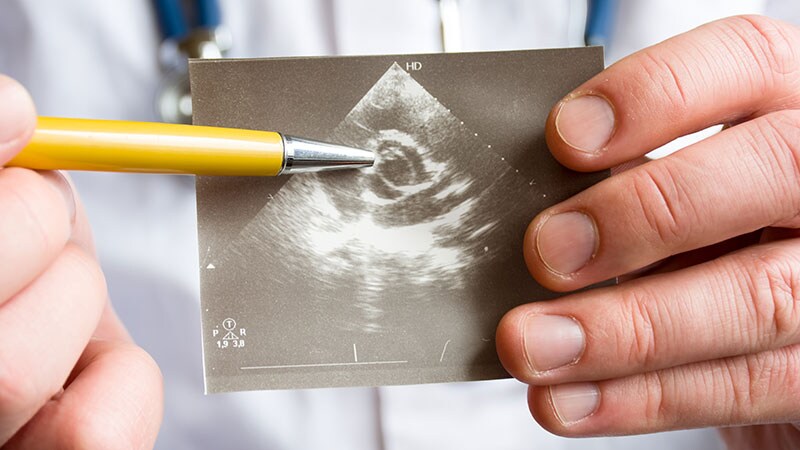 Patients with aortic stenosis (AS) of sufficient severity to portend a high likelihood of early mortality can be detected by an artificial intelligence (AI) algorithm employed in the reading of routine echocardiograms, according to a study that tested this tool in a large national database.

The AS-DSA was trained not only to recognize adverse changes in aortic valve morphology but to evaluate indices of impaired valve function, including those related to the left ventricle, the left atrium, and pulmonary circulation, according to Strange.

AI Algorithm Based On More Than 800k Echos

The training was performed on more than 1 million echocardiograms obtained from 630,000 patients in the National Echo Database (NEDA) of Australia. The testing phase of the study, called AI ENHANCED AS, was carried out on 179,054 individuals from the same database.

In the testing phase, mortality was compared for those determined by AI to have a low probability of clinically significant AS, a moderate to severe AS, or severe AS.

In the nearly 200,000 patients evaluated from the database, the AI-DSA classified 2.5% as having moderate to severe AS and 1.4% as having severe AS. Relative to a 22.9% mortality at 5 years in the low-risk reference group, the rates were 56.2% and 67.9% in the moderate to severe and severe groups, respectively.

All Severe AS by Guidelines AI Identified

The algorithm picked up all patients identified with severe AS in current guidelines, but it also identified patients “missed by conventional definitions,” Strange reported.

The findings support the idea “that the AI algorithm could be used in clinical practice to alert physicians to patients who should undergo further investigations to determine if they qualify for aortic valve replacement,” he added.

Missing clinically significant AS is an important clinical problem, according to Catherine Otto, MD, director of the heart valve clinic and a professor of cardiology at the University of Washington Medical Center, Seattle.

“We focus on the patients who already have a diagnosis of AS,” she said. “The bigger issue is identification of patients with unknown AS.”

She praised the effort to develop AI that improves detection of AS, but also said that there are immediate steps to improve detection of AS even in the absence of AI support. In addition to the variability in the quality of how echocardiograms are read, she said a substantial proportion of echo reports omit key variables.

“We do not need AI to measure the aortic valve. It is simple to do in clinical practice,” she said. However, studies have repeatedly shown that values, such as maximal aortic jet velocity (Vmax) and the pressure difference across the ventricular septal defect (delta P), are not included. When AS is present, some reports do not include a characterization of the severity.

The AI-DSA described by Strange takes into account all of these variables along with additional information, but he acknowledged that it does have limitations. For example, the presence of cardiac impairments other than AS will not be included, and these can be relevant to prognostication and treatment.

AI Does Not Eliminate Clinical Decision-Making

“This algorithm is definitely not meant to take away from clinical decision-making,” Strange said, but he argued that there is an unmet need to do better in the detection of AS. He presented data to show that “even moderate AS is not benign” in regard to 5-year outcomes, and he believes AI-DSA can allow clinicians to detect significant disease earlier and intervene in a timelier manner.

“It is time to revisit the practice of watchful waiting and consider more proactive attempts to identify those at risk,” he said.

The next step is to determine if AI-DSA makes a clinical difference,

“Research is now needed to determine if aortic valve replacement in patients identified as being at risk by AI-DSA improves survival and quality of life, particularly in those who do not meet current guideline definitions of clinically significant disease,” he said.

Strange reports financial relationships with Edwards, Medtronic, Novartis, Pfizer, and Echo IQ, which is developing the artificial algorithm studied in this trial. Otto reports no relevant conflicts of interest.