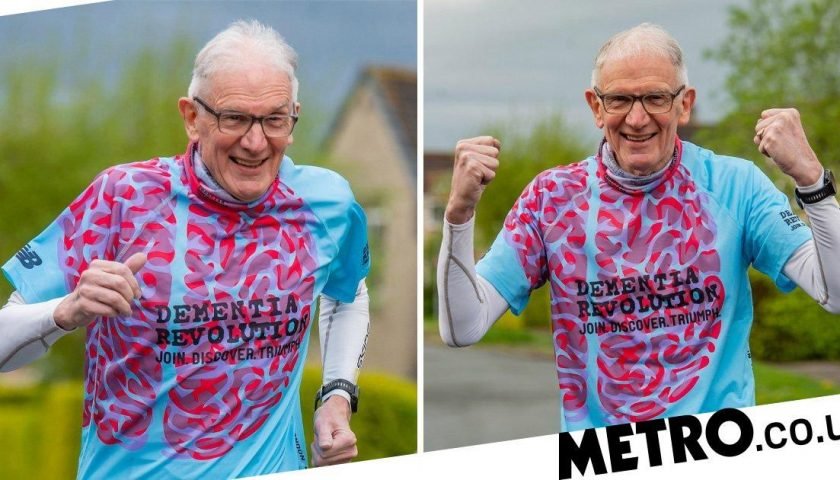 ‘Much to my amazement I was only about seven minutes slower than my 1986 effort. I was panting like a steam engine.

‘I now have a resting heart rate of 39 beats per minute and have the metabolic age of a 42-year-old. I am in the top 15 per cent for performance by runners of my age.

After Malcolm’s diagnosis, doctors encouraged the pensioner to keep running regularly. They said oxygen is good for the brain and that it could help his symptoms.

‘In most cases people would be devastated to be given a diagnosis of dementia,’ explains Malcolm.

‘Strangely, for me because I had been so mystified about my symptoms, it was a relief to be given a diagnosis.

Malcolm, who has three grown-up children and seven grandchildren, now relies on his wife Mary, 77, to help him plan his races.

‘Eventually, I will disappear down the plughole and I will be quite a different person from what I was,’ he says.

‘I find it very difficult at times to find words. I make up words. I can only focus on one thing at a time. I can’t multi-task at all.

‘I sometimes get very angry. I don’t know why I am being angry. It’s frustration that I can’t live a life that I used to live.

‘I might shout at my wife and I don’t want to be shouting at her.

Malcolm’s marathon career started while working as a minister in Jersey when he spotted an advert for the island’s marathon.

He even signed up for the 7x7x7 Challenge – seven marathons in seven locations in seven months, saying simply that it was, ‘really tough.’

‘I just enjoy running and I will do it as long as I am able to do it.’

MORE: Asda launches £2 donut burgers that are perfect for bagels

MORE: Could Socially be the app introverts and citydwellers have been waiting for?

MORE: Four-year-old obsessed with collecting rubbish fulfills dream of being a binman for a day