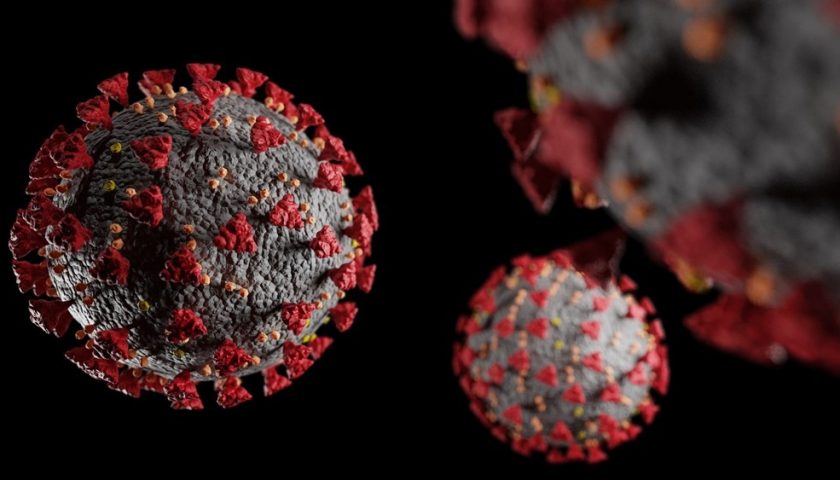 The widespread transmission of the causal virus of coronavirus disease 2019 (COVID-19), SARS-CoV-2, has necessitated the development of specific and potent antiviral agents against SARS-CoV-2. An enzyme called 3CLpro is essential for SARS-CoV-2 replication and was deemed a potential target for discovering effective drug therapies.

In the present study, researchers explored the development of non-covalent and specific inhibitors of SARS-CoV-2 3CLpro.

The team screened deoxyribonucleic acid (DNA) encoded libraries (DELs) of over 49 million compounds with hexahistidine (His6)-tagged purified recombinant SARS-CoV-2 3CLpro, which was bound to nickel (Ni2+)-nitrilotriacetic acid (NTA) magnetic beads. Additionally, His6-tag was engineered into 3CLpro without impacting the protease activity. Furthermore, the 3CLpro-mHis was immobilized on the magnetic beads and incubated with DEL.

The bound DNA-encoded compounds were processed by quantitative polymerase chain reaction (qPCR) before performing DNA sequencing. DEL hits were further categorized according to chemotypes and ranked based on docking calculations. Compounds comprising a bromophenyl ring and an isoquinoline ring were recognized as potential candidates for SARS-CoV-2 3CLpro binders. The off-DNA version of five detected compounds was then synthesized, and their inhibitory activity against viral 3CLpro was assessed.

The inhibitory ability of WU-04 against SARS-CoV-2 Omicron 3CLpro was assessed. Additionally, the activity of WU-02 and WU-04 to bind and inhibit 3CLpro was estimated by crystallizing 3CLpro with WU-02 and WU-04 and determining the structures via molecular replacement. The team also compared the binding modes associated with WU-04 and three non-covalent and six covalent inhibitors, including PF-00835231, of SARS-CoV-2 3CLpro.

The study results showed that SARS-CoV-2 3CLpro crystal structures displayed Thr225 and Gly215 in the loop located at the far end of the dimer interface and catalytic site. A fluorescence-based assay revealed that the protease activity of the His6-tagged 3CLpro, called 3CLpro-mHis, was compared to that observed in the wild-type (WT) 3CLpro. Four of the potential 3CLpro binders inhibited 3CLpro with a half-maximal inhibitory concentration (IC50) of less than 1µM. The team noted that the most potent compounds were WU-02 with IC50 of 71 nM and WU-04 with IC50 of 72 nM. Furthermore, the isothermal titration calorimetry (ITC) data displayed a high binding affinity between 3CLpro and WU-04.

The team observed that the crystal structure of WU-04 showed significant binding to the 3CLpro catalytic pocket, which suggested that WU-04 blocked the 3CLpro substrates from interacting with the catalytic dyad. Hence, WU-04 was a competitive inhibitor of SARS-CoV-2 3CLpro. As per the interactions observed between 3CLpro and its corresponding peptide substrates, the 3CLpro catalytic pocket could be stratified into S1, S1’, S2, and S4. Additionally, the isoquinoline ring from WU-04 docked into the S1 site, while the 6-nitro and 4-bromo groups from the bromophenyl ring docked into the S2 and S4 sites, respectively. Notably, the amino-π interaction found between the Gln189 side chain and the phenyl ring improved WU-04 potency.

The covalent 3CLpro inhibitor called PF-00835231 had a γ-lactam moiety that interacted with the S1 site, similar to the glutamine sidechain at the P1 positions of the 3CLpro substrates. Furthermore, the γ-lactam moiety had carbonyl oxygen that formed a hydrogen bond with 3CLpro His163. This implied that a moiety with the ability to form a hydrogen bond with His163 was essential for 3CLpro inhibitory action.

Other reported structures had either a γ-lactam, a cyclobutyl, a pyridine, a benzotriazole, or a 1-methyl-1H-1,2,4- triazole moiety that docked into the 3CLpro S1 site. The team noted that the key distinction between the reported inhibitors and WU-04 was the presence of a bromophenyl ring in WU-04 that docked well into the S2 and S4 sites.

Notably, aligning the 3CLpro sequences of SARS-CoV-2 to those of SARS-CoV, Middle East respiratory syndrome coronavirus (MERS-CoV), and four other human CoVs showed that the important residues that interacted directly with WU-04 were conserved. Moreover, other residues that were within 5 Å of the WU-04 structures in the SARS-CoV-2 3CLpro structure were also conserved, implying that WU-04 was an efficient pan-inhibitor of the CoV 3CLpro.

Overall, the study findings showed that the WU-04 was a potent and non-covalent SARS-CoV-2 3CLpro inhibitor. WU-04 also inhibited the enzyme activity of SARS-CoV and MERS-CoV with remarkable 3CLpro-binding affinity.

bioRxiv publishes preliminary scientific reports that are not peer-reviewed and, therefore, should not be regarded as conclusive, guide clinical practice/health-related behavior, or treated as established information.

Bhavana Kunkalikar is a medical writer based in Goa, India. Her academic background is in Pharmaceutical sciences and she holds a Bachelor's degree in Pharmacy. Her educational background allowed her to foster an interest in anatomical and physiological sciences. Her college project work based on ‘The manifestations and causes of sickle cell anemia’ formed the stepping stone to a life-long fascination with human pathophysiology.