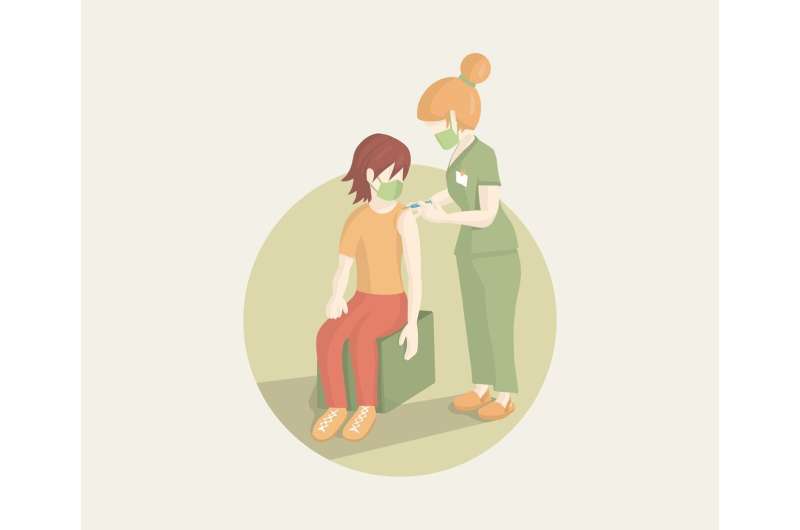 Faux green vines intertwined with fairy lights trailed down the wall opposite her bed. Below the greenery, pictures of the teenager’s family, friends and two dogs had been taped to a wardrobe. Flowers sat in vases on the window sill.

The 18-year-old lay on her bed, wanting to go home.

For the second year in a row, Lilly’s friends headed off to school in late August—this time to college—without her. She was still sick nearly two years after her first bout of COVID-19 and her symptoms weren’t just persisting, they were getting worse.

The coronavirus has left millions of Americans, like Lilly, with unexplained symptoms that have lingered for months—and now years—after their initial infections. But three years into the pandemic, there are still few treatments for the condition that’s become known as long COVID.

“I’d try anything, when it comes to a (clinical) trial or whatever, if it gave me the possibility of having a better quality of life, but there’s no options for that,” Lilly said. “There’s nothing for me to even try.”

There was a period last year when Lilly seemed to be improving, when she felt well enough to return to the soccer pitch and to school. The Denver Post followed her as she returned to those activities, publishing a story in October 2021 about Lilly’s search for both normalcy and for answers on why her symptoms—a soaring heart rate, fatigue, brain fog and more—have persisted.

Since then, Lilly’s doctors have discovered her stomach wasn’t working properly and she has spent most of the year in and out of the hospital, fighting what one of her physicians said are life-threatening infections. Late last summer, Lilly already was struggling to keep food or water down, getting stomach pains anytime she tried to eat or drink. She vomited blood.

So doctors placed a central line in Lilly’s body to give her nutrients, but it has repeatedly become infected, making her so sick that she’s been in the intensive-care unit at the Rocky Mountain Hospital for Children at least three times.

“The thing that’s keeping me alive is killing me at the same time,” Lilly said.

Lilly first tested positive for COVID-19 in November 2020, when cases were surging across the state in what became one of Colorado’s deadliest waves of the virus. Her hospitalization that autumn came as more children and teens became sick with the virus than they did earlier in the pandemic.

Younger people are at a significantly lower risk of being hospitalized or dying from COVID-19. But even as recently as a year ago, researchers and physicians didn’t know how prevalent long COVID, first described in adults, was in adolescents.

Most of the research on long COVID has focused on those 18 and older, said Dr. Alexandra Yonts, a pediatric infectious disease physician at Children’s National Hospital in Washington, D.C.

Adolescents appear less likely to contract long COVID than adults. But more children have the condition than those who were hospitalized with the virus, according to a study published in JAMA Pediatrics last month by a doctor at Children’s Hospital Colorado.

“While it is still rare, it’s still definitely a large problem,” Yonts said, adding that hundreds of thousands of children could have long COVID.

It’s only within the past four or five months that the medical community has really started to define what long COVID is. However, two major health agencies—the World Health Organization and the U.S. Centers for Disease Control and Prevention—don’t agree on the same definition, Yonts said.

For her part, Yonts agrees with the WHO’s definition of long COVID, which says people have the condition when their symptoms last at least three months after their initial infection. The symptoms also majorly disrupt a person’s daily life.

The WHO’s definition of post-COVID conditions is “becoming the mainstay for research and clinically defining long COVID as a syndrome,” Yonts said.

The CDC differs from the WHO on the timeline, saying that long COVID occurs when symptoms last four or more weeks.

Lilly, her family and doctors spent most of last summer searching for answers to why she was still sick months after her first infection in 2020. (She was infected with the virus a second time in February 2021.)

Lilly knew she had symptoms from long COVID that weren’t going to quickly go away. Her heart rate can rapidly soar because of postural orthostatic tachycardia syndrome, also known as POTS. She has fatigue, muscle aches and asthma.

She began having more gastrointestinal issues, such as trouble swallowing, vomiting and struggling to eat. Doctors diagnosed Lilly with gastroparesis late last year.

Lilly’s stomach and intestines don’t work as they should. This means when she eats something, it sits there and doesn’t move through her body, said Dr. Kristine Appel, one of Lilly’s physicians at Rocky Mountain Hospital for Children.

Looking back, Lilly said, she thinks the gastroparesis began earlier than anyone knew.

“My mom had a hard time getting me to eat real food” after she became sick from COVID-19, Lilly said, adding that she relied on protein shakes for nutrition and would eat plain frozen yogurt before her more severe symptoms flared.

Lilly also has ulcers in her stomach that sometimes appear, although it’s unclear if they are directly related to the ulcers that covered Lilly’s body within days of her infection in 2020. She’s also had multiple episodes of gastrointestinal bleeding in the past eight or nine months—one was so bad Lilly needed a blood transfusion, Appel said.

Lilly is unable to eat because of her symptoms so she has to get nutrients—such as protein and fats— intravenously through a central line that goes in a vein above her heart, Appel said.

But Lilly keeps getting infections from that central line and has become septic at least three times. Sepsis is the body’s response to severe infection and can quickly lead to organ failure and death, according to the CDC.

“She’s in kind of a dangerous situation because she is having these life-threatening complications,” Appel said.

For now, Lilly’s doctors are doing what they can do to manage various symptoms, such as her muscle pain.

“Long COVID still remains a very big medical mystery,” Appel said. “This population of patients really needs help but right now there’s really no guidance on what we can do to make these issues better.”

Newer research on long COVID has looked at potential biomarkers and possible ways doctors can treat the condition. But there are no clinical trials taking place that look at possible treatments for children and teens, Yonts said.

Funding for long COVID clinical trials has lagged because the lack of a defined condition has made it difficult to narrow down which patients should participate in the research, she said. Clinical trials typically start in adults because of concerns about how vulnerable pediatric patients are.

“There are many potential (treatment) options but they’re not proven,” Yonts said.

And insurance companies aren’t going to pay for treatments that aren’t proven, meaning patients have to pay out-of-pocket to try therapies that could cost thousands of dollars without knowing if they will work, Yonts said.

Lilly, her family and doctors wanted to try treating her with Regeneron’s monoclonal antibody therapy.

She responded well to a monoclonal antibody treatment previously and each time Lilly has gotten a COVID-19 vaccination she has a period where her condition improves for a couple of weeks, said Elisa Downs, Lilly’s mother.

The medical team treating Lilly doesn’t know if monoclonal antibodies would even help.

“(H)owever, subjectively, given there are no other good options, wouldn’t it be wonderful if it helped even a little bit?” Appel said. “And we do not feel it would be harmful to her at this point compared to all of the serious complications she has had.”

But it’s very difficult to access the therapy, which targeted an earlier variant of the virus, because the emergency use authorization issued by the U.S. Food and Drug Administration has expired.

The treatment is not authorized in the U.S. because it’s not as effective against the virus’s omicron variants, according to Regeneron’s website.

Lilly’s medical team made two compassionate-use requests to the company for the therapy, but both were denied.

“It feels like people who get COVID and are sick for two weeks get more treatment and get more attention than the people who have been living with COVID for two years,” Lilly said.

Now that Lilly is 18, the hope is that there will be more opportunities for her to become part of a long COVID clinical trial for adults, Appel said.

But for that to happen, Lilly needed to be well enough to leave the hospital.

‘Each time it seems to be getting worse’

Lilly had spent a total of five weeks at home since early April.

On the night of Lilly’s senior prom, she was in the ICU.

When Lilly turned 18 in July, she was in the ICU—again.

Earlier this year, she had to relearn how to walk after she lost the ability to do so without assistance.

“Each time it seems to be getting worse,” Lilly said. “I just get sicker every time I get an infection. It’s just hard because every single decision I make has to do around my health.”

Lilly and her family had plans to travel. The teen had plans, now on hold, to go to college.

Now, in those rare moments when Lilly is home, she keeps a bag packed in case she needs to rush to the hospital.

“You don’t want to lose hope because that’s what keeps us going, but the longer this goes on the harder it is,” her mother Elisa Downs said, adding, “We live—it used to be day to day, but I kind of feel like lately it’s hour by hour.”

During an interview at the hospital late last month, Lilly was nervous about returning home.

She has learned how her body feels when she is getting an infection. Her brain fog gets worse. She becomes so tired she sleeps most of the day. Then the fever comes.

“Which scares me about going home,” Lilly said.