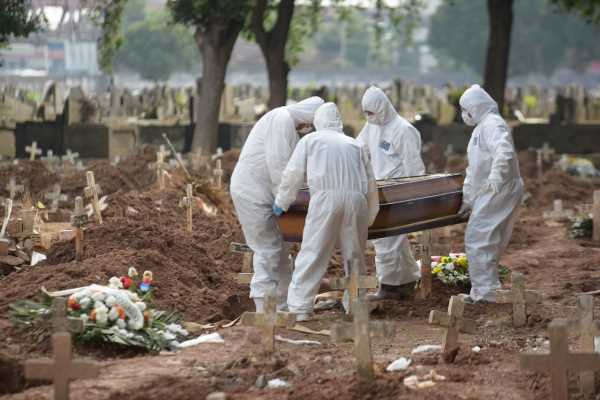 At least 1 million people have now died from COVID-19. This grim milestone comes eight months after the public first learned that a mysterious respiratory virus was infecting people in China.

The novel coronavirus swept quickly across the globe and overwhelmed hospitals from Italy to New York City.  The virus has caused a larger death toll in some places than in others; the toll is highest in the U.S. with more than 204,900 deaths, followed by more than 141,700 deaths in Brazil and more than 95,500 deaths in India, according to the Johns Hopkins dashboard.

But the official tally is likely lower than the actual death toll of the virus, Dr. Mike Ryan, the executive director of the World Health Organization’s health emergencies program said on Monday (Sept. 28). “When you count anything, you can’t count it perfectly but I can assure you that the current numbers are likely an underestimate of the true toll of COVID,” he said.

—The 12 deadliest viruses on Earth

—20 of the worst epidemics and pandemics in history

On Friday (Sept. 25), Ryan said it’s possible the death toll could double to 2 million before vaccines become available, at least if countries don’t work to stop the spread.

“It’s certainly unimaginable, but it’s not impossible, because if we look at losing 1 million people in nine months and then we just look at the realities of getting vaccines out there in the next nine months, it’s a big task for everyone involved,” he said, according to CNBC. “The real question is: Are we prepared, collectively, to do what it takes to avoid that number?”

Still,  fatality rates have slowly declined over time because experts have started to understand how best to treat severe patients, for instance figuring out how to best deliver oxygen and giving the steroid dexamethasone, Ryan said, according to CNBC.

In the U.S., COVID-19 is on track to become the third-leading cause of death in 2020, after heart disease and cancer, Live Science previously reported. The Institute for Health Metrics and Evaluation (IHME) model predicts that nearly 167,000 more people will die in the U.S. by January 2021. Worldwide, at least 33.2 million people have contracted the novel coronavirus, and more than 7.1 million of those cases come from the U.S., according to the Johns Hopkins dashboard.