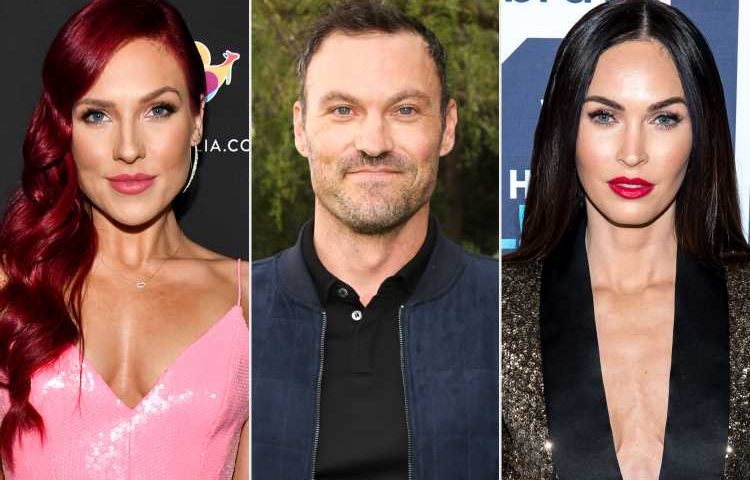 On Friday, the Dancing with the Stars pro appeared on the Australian daytime program The Morning Show and praised the former couple's parenting skills in raising their kids Journey River, 4½, Bodhi Ransom, 7, and Noah Shannon, 8.

Burgess, 35, said the exes are "doing a great job with managing their situation" and she feels "grateful that [she's] been able to fit into it — into their world."

"He's a wonderful dad, and he and his wife — uh, ex-wife — have raised three beautiful children," she continued. "And they are so wonderful and sweet and kind and considerate, and they've done such an amazing job."

Green, who became Instagram official with Burgess last month, is still in the process of finalizing his divorce from Fox, who is currently dating Machine Gun Kelly.

Following Green's split from Fox, 34, a source told PEOPLE in December that he had been seeing Burgess "for a few weeks" when they were seen at Los Angeles International Airport departing for a trip together.

The actor, 47, and professional dancer recently celebrated Valentine's Day together, opening up about their relationship on Instagram. During a 12-minute Instagram Live session, the pair discussed how grateful they are to have found each other, with Green saying, "Everyone knows this has been kind of a weird year for me, so what an amazing Valentine's Day this has been."

The dad of four went on to praise Burgess, calling her an "amazing, considerate, loving, kind person."

"And it's funny — I kinda feel like when you put yourself in a space where you, on some level, decide that you're going to surround yourself with people that help you move forward on a path instead of pulling you back, that they do that," he said.

"Sharna's been amazing in my life — not only for that reason, but that's been a big thing for me. She's been so invaluable, she really has," continued the Beverly Hills, 90210 alum. "And what a great way to start 2021 — to find an amazing person and go into it with a positive feeling and outlook and really a sense of, 'This could be the year that starts something. This could be the start of something amazing.' " Burgess then shared her thoughts about Green, admitting that he took her "completely by surprise" and that she has "never known a man like him."

The couple also recalled recently traveling to California's Big Bear Lake with Green's sons. In addition to the kids he shares with Fox, the actor is also dad to 18-year-old son Kassius Lijah, with ex Vanessa Marcil.

"The kids were super happy," he said. "They had mac and cheese and fish sticks. We had some fried rice with chicken from the night before and liquor-store steaks. It was a good run for us."