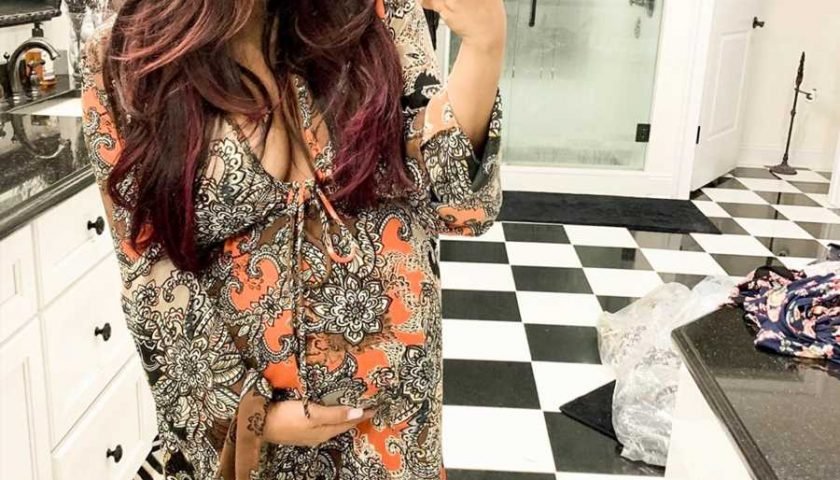 Your mama is ready to meet you, baby Angelo!

Nicole “Snooki” Polizzi is admittedly growing impatient as she waits for her third child to make his debut, taking to her Instagram story to vent her frustrations on Sunday.

Atop a Boomerang clip of her baby bump, captured from above, the 31-year-old Jersey Shore star wrote, “Come out you little s—” as she gently shook her belly back and forth.

A second video saw her “bouncing on a ball” and trying to induce labor with “fresh lemons,” while a third featured her 4½-year-old daughter Giovanna Marie singing to her mom’s belly.

“Let’s sing the baby out,” Polizzi wrote to accompany the latter clip.

Polizzi hasn’t held back about how ready she is to give Giovanna and son Lorenzo Dominic, 6½, their new sibling. Earlier this month, the reality star said she was “annoyed” that she had to wait two more weeks for Angelo’s arrival.

“So I just got back from the doctor’s office. I’m so annoyed because I’ve been feeling cramps and I swear the baby’s coming out, and then I went today and he said like another two weeks or so,” she told her podcast co-host on the May 16 episode of It’s Happening with Snooki and Joey.

Polizzi said that she and her husband Jionni LaValle were hoping their baby boy would be born May 26. She added that they might have to “switch things around” to make sure the father is there for the birth if he comes later.

“I’m annoyed that I have to spend another couple weeks feeling this miserable,” she said. “You have no idea.”

In addition to hosting the podcast, Polizzi also runs The Snooki Shop and hosts How Far is Tattoo Far on MTV with Nico Tortorella — and, of course, is starring on Jersey Shore: Family Vacation, the third season of which is expected to drop this year.

The hard-working mom told PEOPLE in March that she won’t be taking maternity leave after baby Angelo is born, explaining, “I’m probably gonna take a couple of days off but my mental state is always thinking about work and my brand, and expanding it and improving it and making it better. So taking a day off … that stresses me out, actually.”

“They tell my belly how their day was. They kiss the belly,” Polizzi added in her March interview with PEOPLE. “My daughter, [when] she has food, she’ll put it by my belly [to] ‘feed’ the baby. It’s so cute.”