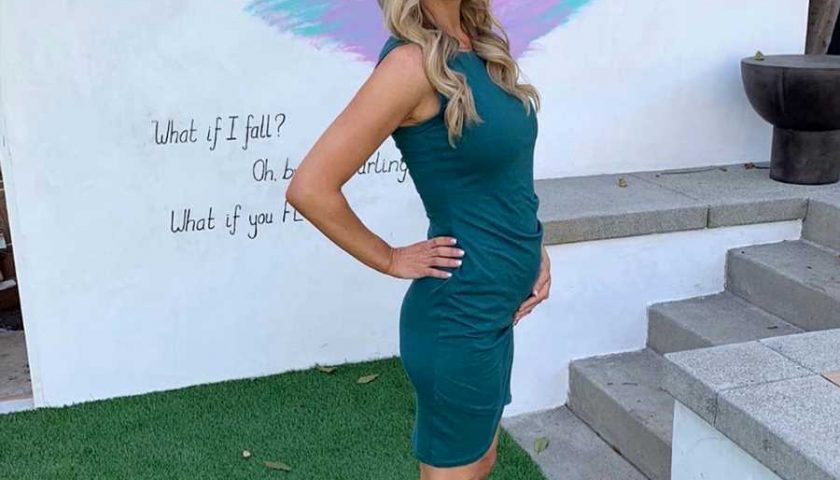 Twenty weeks down and 20 to go!

Christina Anstead, who is pregnant with baby No. 3, revealed to her fans and followers on Thursday that she is officially halfway through her pregnancy.

In an adorable Instagram photo, the expecting Flip or Flop star, 35, cradled her growing baby bump as she posed barefoot in front of an angel wing mural, which was gifted to her by her husband Ant Anstead and his daughter, Amelie.

“Officially half way done with this pregnancy ?? ?. First trimester went by sooo slow but now time is flying by!” Christina, who donned a fitted, knee-length green dress, captioned the smiling shot.

“And how cute are these angel wings @ant_anstead and @amelieanstead surprised me with?! ? #20weeks,” she wrote.

The multi-colored piece of art also featured a phrase, which appeared to read, “What if I fall? Oh, but darling, What if you fly?”

Late last month, Christina announced that she and Ant, who married in December, are expecting their first baby together in September.

“@ant_anstead and I are so excited to announce #babyanstead coming this September!! The kids are all so excited to meet their new sibling,” she posted alongside a snapshot of herself holding out a sonogram photo while hugging her husband.

And earlier this month, days after her ex-husband Tarek El Moussa accidentally announced she was expecting a baby boy, Christina revealed the sex of her baby on the way with Ant.

The Christina on the Coast star shared a happy photo from their sex reveal celebration on Instagram, which featured her two children with 37-year-old El Moussa — son Brayden James, 3½, and daughter Taylor Reese, 8 — and Anstead’s son Archie, 12, and daughter Amelie, 15.

“It’s a boy ?!! @ant_anstead, the kids and I are so excited! This blended family cannot wait to add our 5th child to the mix,” she captioned the group photo.

The sex reveal came after El Moussa sat down for an interview with TMZ Live, during which he let slip the sex of the Ansteads’ baby on the way.

“Things are good today. She’s remarried, she’s actually pregnant — everybody knows that,” he said. “She’s having a son. My kids are super excited. I’m excited for her new chapter in life. They’re a great couple and I really do hope the best for them.”

Shortly after, Christina’s publicist Cassie Zebisch confirmed to PEOPLE exclusively that the pair is indeed expecting a boy.

“While Christina and Ant wished they could have shared the news themselves,” Zebisch said, “they are very excited to welcome a baby boy in the fall.”