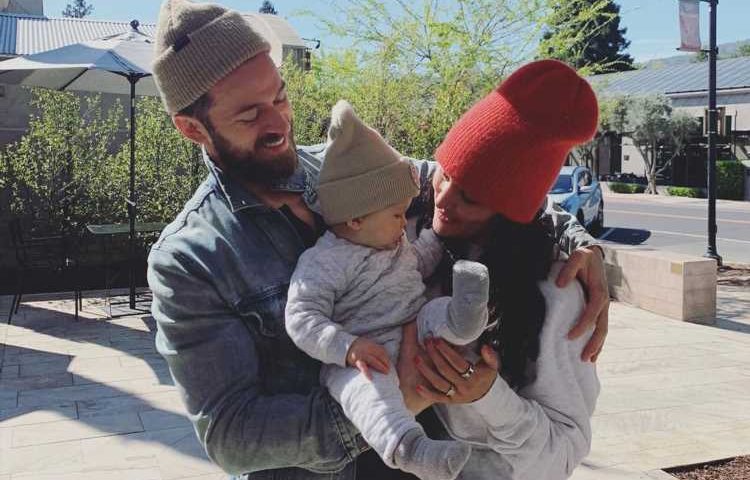 Nikki Bella is enjoying some quality time with her family.

On Wednesday, the Total Bellas star, 37, posted several photos of herself cuddling with fiancé Artem Chigvintsev and their 8-month-old son Matteo Artemovich on her Instagram, dubbing the trio her "little fam."

"I love my little fam so much 🥺😅🥰," she wrote alongside a slideshow of pictures, which showed Chigvintsev, 38, holding their child as Bella gave the little boy a kiss.

In another post, Bella shared four selfies of herself with the toddler.

"Me + Teo : May be the most tired I have felt in my life but it's definitely the happiest and most blissful I have ever been," she captioned the shots. "I love you my sweet Matteo, SO much! ❤️."

The mother of one also showed some love to Chigvintsev in a third post, in which the couple can be seen hugging after Bella's workout.

"How my sweat sessions are after @coachscottthom kicks my ass lol I need the full body love!!" she wrote.

RELATED: Nikki and Brie Bella Open Up About the Best Parts of Raising Newborn Sons: 'I'm Just So in Love'

Bella has been open about her life as a mom since Matteo's arrival in July, documenting everything from her baby boy's milestones to her postpartum body transformation on social media.

The former professional wrestler has also been candid about how she and Chigvintsev have evolved since becoming parents.

In November, Bella revealed during an appearance on The Tamron Hall Show that the couple experienced issues in their relationship when Chigvintsev left to film Dancing with the Stars just months after they had welcomed their son.

"I was so supportive and pushing him out the door to go do Dancing and then I realized once he left, I was like, 'Oh my gosh, what did I do? Like I need him.' And so it was really hard," Bella recalled.

When host Tamron Hall asked Bella if they were in therapy, she responded, "We're going to start after the season and it's mainly just to be amazing parents and knowing how to balance parent life out and also our own relationship. Because Artem and I don't ever want to have a struggle. You know, we plan on being married."

In January, Bella shared on Kaitlyn Bristowe's Off the Vine podcast that they had entered couple's therapy.

According to Bella, one of the things the couple are working on is communication because when Chigvintsev "gets really stressed, he doesn't realize his tone."

"We're actually in therapy for this," she explained.

Bella, who was partnered with Chigvintsev on season 25 of DWTS prior to their romantic relationship, also said that he was "super strict" during their time together on the dancing competition.

"I remember during dress rehearsals sometimes I'd be like, 'Is he mad at me?' " Bella remembered. "It would make me feel really off. It would just be his tone. It was hard, it was hard on me a lot."

Bella reconnected with Chigvintsev after her breakup with John Cena and the two made their relationship official in July 2019. They got engaged during a romantic trip to France that November.

The pair plan to get married on Thanksgiving weekend later this year.