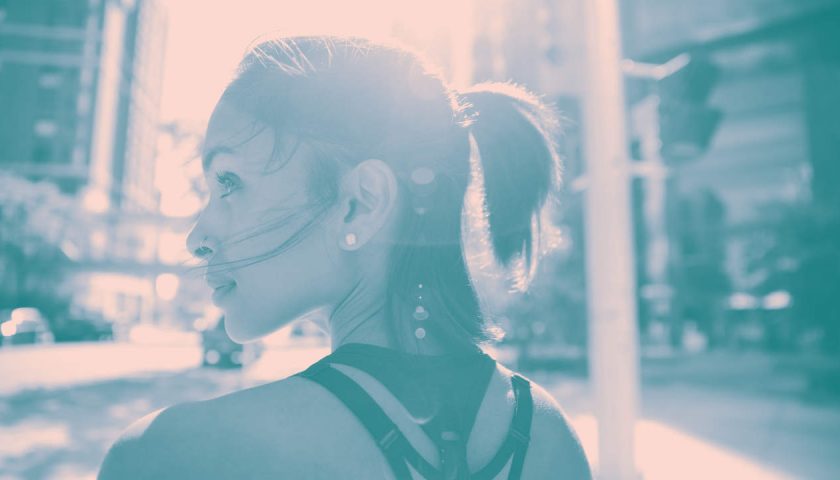 I used to be one of those people who loves the treadmill—I’d hop on every day for over an hour, listening to my favorite playlists and just zoning out. It allowed me to be alone with my thoughts, and that was what I wanted…until my thoughts would end up leaving me in tears instead.

This was back in grad school, when I ended a tumultuous two-year relationship with a guy who was all sorts of unstable. I didn’t realize it at the time, but almost all of our interactions were examples of emotional abuse. He worshipped the ground I walked on when I did what he wanted, but he screamed at me when I didn’t. He played on my fears and criticized me during fights, and he’d blackmail and threaten me if I didn’t agree with him. Once, he even left me waiting for an hour outside his dorm building, refusing to sign me in because I came back from a party later than I had promised… after which he started punching walls in front of me to scare me.

The final straw, however, came during an altercation at my gym when I was using the treadmill. He showed up to run on the track, which faced the row of treadmills I was in. Earlier we’d had an argument, and I was hoping we could ignore each other and deal with it at a later time. Instead, he started screaming at me in front of everybody at the gym. When I tried to get away, he took my arm and twisted it behind my back so I couldn’t leave. It was the first time he’d ever physically harmed me, and I ran crying to my apartment. We never spoke again.

After that, I was lost. Not only had I ended a relationship that, despite all of its flaws, meant something to me, but I also no longer had my source of solace, since I was so terrified to go to the gym again. This took its toll on me in several ways. I barely ate, I burst into tears without provocation several times a day, and I slept all the time. It was so hard to get me out of bed that my roommates used to have to force me to go to class. One time I woke up, heard a song that made me cry, and physically couldn’t leave my bed the entire day. This wasn’t at all a healthy way to live, and even though I knew that, I couldn’t bring myself to do anything about it.

Thankfully, a close friend invited me to go with her to a class at SoulCycle, the fitness program where participants cycle in unison in a darkly lit room to high-energy beats. She hoped it would get my mind off things, so I forced myself out of bed and trekked down to the studio with her. Instantly, I was hooked. The instructor, Lori, was a kind and bubbly personality. Despite not knowing what I was doing, I found myself laughing at her silly jokes and singing along to the music, a mix of bubblegum pop and hip-hop.

The one thing that struck me the most, however, was that, for 45 minutes, I wasn’t thinking about the end of my relationship, my sadness, my future, or my fear—I was only thinking about the choreography, the music, and the instructor. This was liberating. For so long, all I was doing was moping, and I couldn’t get my emotionally abusive relationship off my mind: How had I read the signs so wrong?

During class, my mind was 100% clear for the first time since my breakup. It was the complete opposite of the way I used to feel on the treadmill, but I needed the change. The soreness felt so good, and I could sense myself getting stronger both physically and mentally.

After that, I was a woman possessed—I booked a class every day with a different instructor, even fitting classes in at 6 a.m. if I had a full day of school ahead of me. I liked some instructors, and I didn’t like some instructors. But when I found Danny, it was love at first sight. He had bleached blonde hair shaved to one side, black eyeliner, and an explosive personality. Class was a wild mix of silly jokes, acrobatics, dance music, and motivational phrases. How could I not be distracted?

Up until that point, I had considered myself more of an outsider, just flitting through classes like a fly on the wall. But at that class, not only did the instructor introduce himself and start chatting with me, but the other riders asked for my name, too. I even opened up to some of them about my abusive relationship over time, since I became a regular fixture at Danny’s classes.

In turn, they opened up about their lives: One woman was going through a divorce, and another was worrying about getting a job after graduation. It’s strange, but being there with a group made me feel less alone. People were open about sharing what they were going through. After all, sweating in that dark room, who were we to judge?

It also helped me that I had to actually show up—not only would I be wasting $32 a class (which, especially on my graduate school budget, was ridiculous), but my friends at the front desk would know I didn’t attend and ask me why next time I saw them. There were so many days I honestly just didn’t want to leave my room because I’d be crying too hard, but the accountability and promise of feeling better after the classes kept me going.

Slowly, my confidence increased. I had never lifted any weights or pushed through resistance before, and I could see myself getting stronger. This also led me to fuel myself better. I noticed that when I barely ate, I couldn’t keep up with the rest of the class, and this encouraged me to make healthier food choices and get my appetite back.

Apparently, a group workout can do this to you. According to clinical psychologist Kevin Gilliland, PhD, it’s common for women who are or were in stressful situations to turn to group fitness, and it’s something he recommends to his patients.

“We need to have places and interactions that are about ‘normal’ life, where we feel the freedom to laugh, to be challenged in an activity, and to talk about everyday things,” he explains. “A group fitness class is a great place to do that. Push yourself physically and mentally, and have other people encourage you and challenge what you can do: Those are valuable beyond the class. Group exercise also helps with issues of isolation, which we often have when going through difficult times.”

These days, I attend different kinds of group workouts, from Pilates to boxing to, yep, spin class. I no longer need a workout to get out of bed, but it still helps me handle a stressful situation, makes me feel like I’m part of a community, and has connected me to people who became some of my nearest and dearest friends.

I’ll always remember my biggest post-relationship breakthrough: I was cycling in the second row, trying to keep up with everyone, when a friend next to me touched my hand. In that moment, I somehow found the strength to keep going—and I realized I had the strength to keep healing in real life, too.