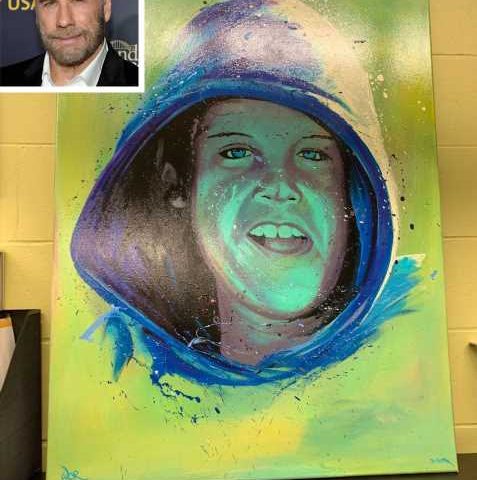 John Travolta is honoring his late son Jett, who unexpectedly died at age 16.

On Saturday, which would’ve been Jett’s 27th birthday, the actor shared a photo of a portrait that was gifted to him by a fan.

“A painting a fan made of my son Jett! Happy birthday my son I love you!” Travolta, 65, captioned his Instagram post.

In January 2009, Jett died while on vacation with his family in the Bahamas. He had suffered a seizure at his family’s vacation home at the Old Bahama Bay Hotel on Grand Bahama Island. The teen had hit his head in a bathtub and was declared dead at Rand Memorial Hospital.

One week ago, the actress shared an emotional Instagram post along with a black-and-white photo of Jett smiling between his two parents in a big bed as they both kiss him on the cheek.

“To my sweet love, Jett… you are in our hearts forever,” Preston lovingly wrote.

“I send love to all of the beautiful autistic children and the wonderful people who love them. May we all shine and grant love and respect to children with special needs,” Preston added, along with hashtag acknowledging April is Autism Awareness Month.

In 2003, Preston revealed that Jett had Kawasaki Syndrome — a condition typically associated with inflammation of the arteries — when he was 2 years old.

The couple is also parents to 19-year-old daughter Ella Bleu. Over a year after Jett’s death,  Travolta and Preston welcomed son Benjamin, now 7.

Throughout Jett’s life, Travolta and Preston always spoke highly of their child, referring to him as “the most wonderful son two parents could ever ask for.”

In 1994, Travolta told PEOPLE how much he loved fatherhood. “I can’t imagine what life would be like without Jett,” he heartbreakingly said, 15 years before his son’s untimely death.

“After he was born and cleaned up, I held him for hours while Kelly slept,” the actor explained. “When they came to take him away for various tests, I said, ‘No, you can’t see him today. You’ll have to do it another day.’ I went a little nutsy.”