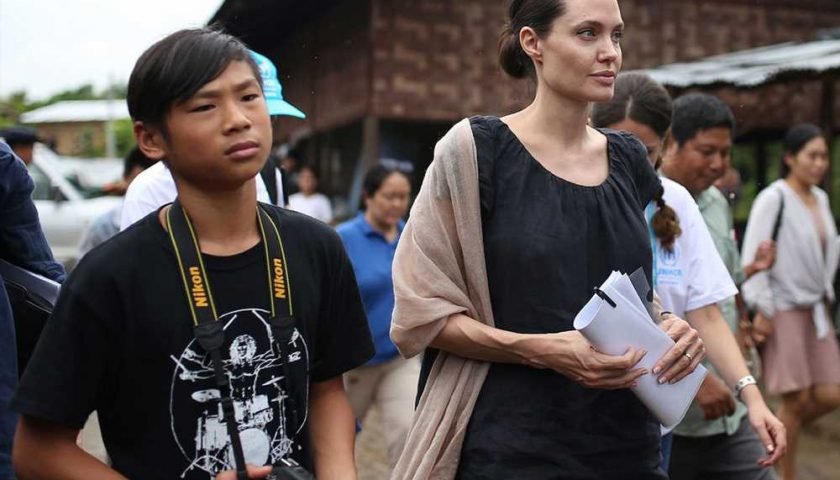 Angelina Jolie‘s career-long commitment to charity, continued role as a UNHCR Special Envoy and her love of traveling the globe are passions she’s passed onto her children.

In July 2017, Jolie and Shiloh traveled to Namibia to open the latter’s namesake Shiloh Wildlife Sanctuary. The sanctuary, which cares for elephants and rhinos that have fallen victim to poaching or abuse, is located at the N/a’an ku sê Foundation in the African country. The 13-year-old was actually born in the country.

“Her face lit up when she saw the sanctuary for the first time,” a source told PEOPLE of Shiloh’s special visit in 2017. “The name was a surprise to her and she was beaming. She and her brothers and sisters moved around very quietly as the newly rescued elephants were still settling in.”

During their five-day stay, Jolie and Shiloh met with N/a’an ku sê founder Rudie and Marlice van Vuuren (whom the actress has known for nearly two decades) and got hands-on experience working with the wild animals, including some cheetahs.

During Jolie’s trip to Cambodia in February 2017, her entire brood attended the world premiere of First They Killed My Father in Siem Reap.

The country’s King Norodom Sihamoni and Queen Mother Norodom Monineath Sihanouk were in attendance at the premiere, along with a host of other senior government officials. Jolie and the children posed for a photo with the royal family at the premiere.

Her sons Maddox — who was born in Cambodia — and Pax were both involved in the production of the film, which included only local actors.

During the screening, Maddox even stepped up to the mic, telling the crowd of Hollywood stars and local dignitaries, “Thank you everyone for attending tonight. We finally made it. It’s a great honor to present this film to all of you, and to stand by my mother and my family.”

While in Cambodia in February 2017 for Jolie’s project First They Killed My Father, the actress introduced her children — and the BBC’s Yalda Hakim — to some interesting local cuisine: bugs.

The family dined on spiders and scorpions, with Jolie telling twins Knox and Vivienne Jolie-Pitt, “See the hard part where you have the teeth? Take the fangs out.”

After throwing the insects in a skillet, Jolie revealed that she’d previously eaten crickets while in Cambodia.

“You start with crickets. Crickets and a beer, and then you kind of move up to tarantulas.”

In the summer of 2015, Jolie and son Pax toured the Jan Mai Kaung refugee facility in Myanmar with UNHCR.

The four-day trip helped Jolie learn more about the country’s situation in her capacity as both the co-founder of the Preventing Sexual Violence Initiative, and as a special envoy.

The mother-daughter pair visited a Syrian and Iraqi refugee camp in the town of Midyat, in the Mardin province of the country.

Jolie told PEOPLE at the time that Shiloh had many questions after meeting refugee families and children, and said, “It is of course hard to explain all of the harsh realities of war and displacement. She said she felt sad, but was happy that she went and is looking forward to the next visit.”

As Jolie’s children grew older, she included them more publicly on trips, including a 2015 visit with daughter Shiloh to meet with Syrian refugees in a tented settlement in Lebanon’s Bekka Valley.

While in Lebanon, Shiloh spent time with a 12-year-old Syrian girl named Hala, whom Jolie met during a previous trip for the UNHCR.

“Shiloh is very aware that I hold refugee families in high regard and has been asking to come on missions and meet them for many years,” Jolie told PEOPLE at the time. “She had heard about Hala since my last visit to Lebanon, and has been wanting to meet her and her brothers and sisters.”

As far back as 2004, Jolie has been bringing her children on goodwill trips. That year, Jolie brought her first child, son Maddox, along during a visit to Barcelona, Spain, for World Refugee Day. Maddox was adopted from Cambodia just two years prior.

While in Barcelona, Jolie spoke about refugees’ hopes and aspirations ahead of a policy conference, UNHCR said at the time.