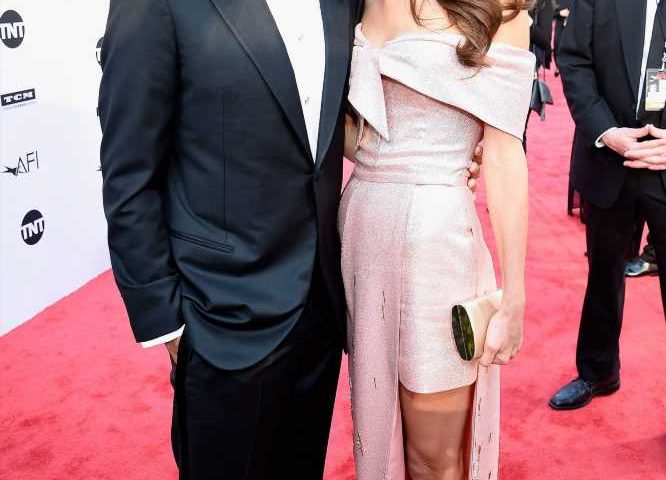 Although the news of the twins had Clooney thrown for a loop — “What? Two?” — the actor told CBS Sunday Morning in November that he is now “so glad” his twins have each other to grow up with. “How that goes in as a carrot and how that comes out the way it comes out is shocking. I don’t know what’s going from here to here. What happens?”

On His Kids’ Distinct Personality Traits “Ella is very elegant and dainty … [Alexander] laughs louder than anyone in the room, it’s the funniest thing.” On Waking Up With Amal Every Three Hours On the Bond He Shares With His Kids “Right now with my kids, because I have no breasts, I don’t exist. I pick them up, I give them a bottle and I hand them back to my wife and they’re happier.”

On the Fact that His Kids Were Born Privileged “Just because you happen to have been born into a sort of lucky situation in many ways, certainly not into poverty and into some place of luxury, you want to make sure they’re empathetic and compassionate. That they learn all the things I was taught as a young man about how we’re only successful as a country as the people who are least successful. I think that’s going to be a challenge, to constantly remind our kids that being born in one place doesn’t give you the right to just ignore everyone else’s difficulties.”

On His Friends’ Reactions to Him Becoming a Dad “It’s something I never thought I would be doing. All my friends are laughing at me and they think it’s funny — I get it. Fair enough, I gave them a hard enough time.”

On Deciding to Have Children Together “We just felt we’d gotten very lucky, both of us, and we should share whatever good luck we’ve got. It would seem self-centered to just have that belong to us.”

On How Amal Was Doing as a New Mom “She’s like an Olympic athlete. She’s doing so beautifully.”

On Learning They Were Expecting “[The doctor] goes, ‘Well, there’s one.’ And I said, ‘Great.’ And then he goes, ‘And there’s the second one.’ And I was like, ‘What?’ We just sat there, staring at that piece of paper they give you, and I kept thinking there was a mistake.”

On the Ritual the Kids Are Continuing for Their Dad “I just have to clean the barf off of my tux. It used to be my barf but now it’s the twins’ barf. So it all works out.”

On Becoming a Dad On How His Life Has Changed On His Role as a Dad “I’m a very good diaper guy, which I didn’t expect.”

On His Son Alexander “They start out with a personality right off the bat. [Alexander] is a thug already … He’s a moose! Literally, he just sits and he eats.” “She’s very elegant, and all eyes. She looks like Amal, thank god.”

On How They Decided on Their Baby Names “We figured these kids are going to be looked at a lot and watched and [have their] every move sort of judged, and we wanted them to at least have a break with the names. So we looked for some sort of normal names. We didn’t have any great inspiration. It wasn’t Alexander the Great and Ella Fitzgerald.”

On His Advice to Other Couples “I really didn’t think at 56 that I would be the parent of twins. Don’t make plans. You always have to just enjoy the ride.”