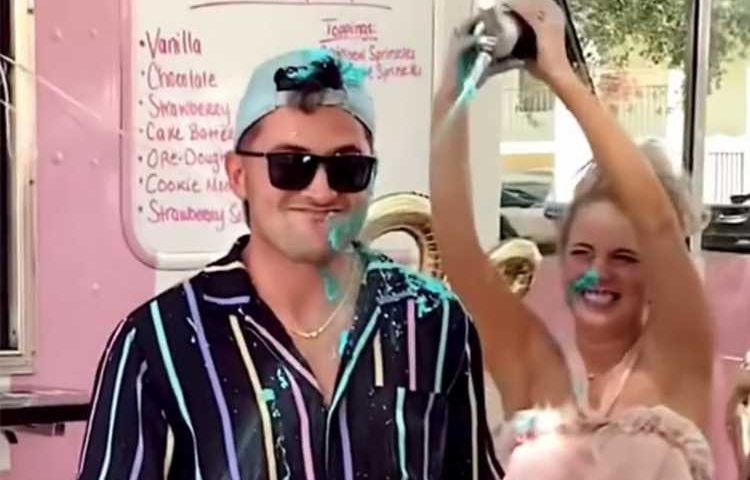 It's a boy for Big Brother alums Nicole Franzel and Victor Arroyo!

The couple, who are currently expecting their first child together, announced the baby news on Monday.

In the clip, Franzel discovers that she's expecting a son with Arroyo, 29, after spraying a can of blue-tinted whipped cream on top of a bowl of ice cream.

Arroyo then seems to hint at the baby's name by proclaiming in the video, "Victor Arroyo the fourth!"

The dad-to-be also teased the same moniker on his Instagram, writing alongside a photo from the big reveal, "T'S A BOY!! 💙 Victor Arroyo IV 👑."

"Love my boys so so so so so much ❤️," Franzel replied in the comments section.

Franzel and Arroyo's exciting announcement comes just six days after they got married in a small ceremony in Orange Lake, Florida.

The pair had been teasing their nuptials on social media leading up to the ceremony, with Franzel posting pictures and video from the rehearsal dinner on Monday.

On Tuesday morning, Arroyo shared a picture of himself kissing Franzel, writing in the caption, "I can't believe the day is finally here 😍 Nic and I will finally be MARRIED!! 👰🏼🤵🏽‍♂️ + baby in the oven 😁 #arroyalwedding."

He posted a photo from the wedding on Thursday, captioning the shot, "What they say is true, your wedding day passes by in a flash. It was an exciting and emotional day, and I loved every moment. So blessed to be married to my best friend and soulmate 🙏🏽😍."

The season 18 competitors got engaged two years ago on an episode of the CBS reality competition series when Arroyo surprised Franzel with an on-air proposal.

They announced Franzel's pregnancy this January.

"Nic + Vic = our lil' side kick 👶❤️ We are SO excited to announce that we are PREGNANT!" Franzel wrote alongside a photo of the parents-to-be posing in front of a sign that read: "NIC + VIC / LIL SIDEKICK / JULY 2021."

She added, "We feel so blessed & grateful. 🥰 #cococalientefamily 🌶🥥."