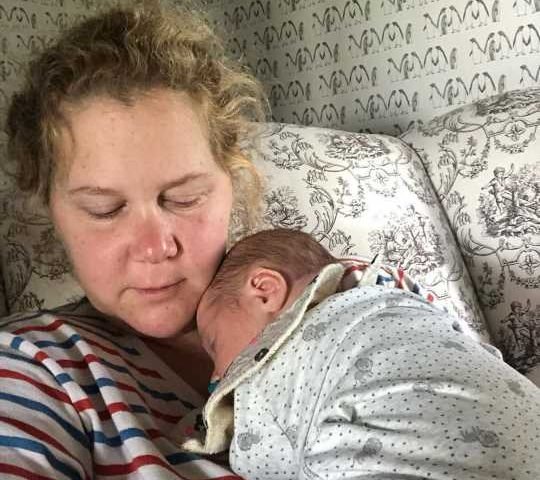 Wearing a striped T-shirt, the new mom looks down at her baby boy, while a seemingly sound asleep Gene sports a sweet lion-print outfit and a bib.

“Oh ok so I can’t watch handmaids anymore. #filledwithregret,” joked Schumer in the caption, referring to season 3 of The Handmaid’s Tale, which just dropped three episodes on Hulu.

Amy Schumer Addresses Critics Who Slammed Her for Returning to Work Two Weeks After Birth: “Always Wanted to Be Mom Shamed!”

The actress and comedian recently celebrated her first birthday as a mom on June 1, revealing on social media that she spent the day cuddled up in bed with Gene, who she welcomed on May 5 with husband Chris Fischer.

“This s— is [bananas],” Schumer captioned the post, which featured her lying in bed under the covers with Gene, a plate of food and her dog Tati.

The photo was a hit with the I Feel Pretty star’s famous pals, including Miley Cyrus, who commented, “That looks soooo comfy,” and Julianne Moore, who wrote, “I love it!”

Since Gene made his much-anticipated arrival, his mom has given her social media followers a glimpse at the trials and tribulations of new parenthood, including the realities of pumping breast milk and baby’s first bath.

In the latter image, which Schumer shared on May 24, she cradled her newborn — who was all swaddled up in a tiny white towel, post-wash — while feeding him a bottle. Standing by her side, Fischer glanced down at the couple’s baby boy.

“First bath no problem,” she captioned the sweet snap on her Instagram story.

Of course, while their son was nice and dry after his bath, both Schumer and her husband got pretty wet during the activity. As the actress has never been one to gloss over the less glamorous aspects of motherhood, the snapshot showed the proud parents standing with Gene in their damp clothes.